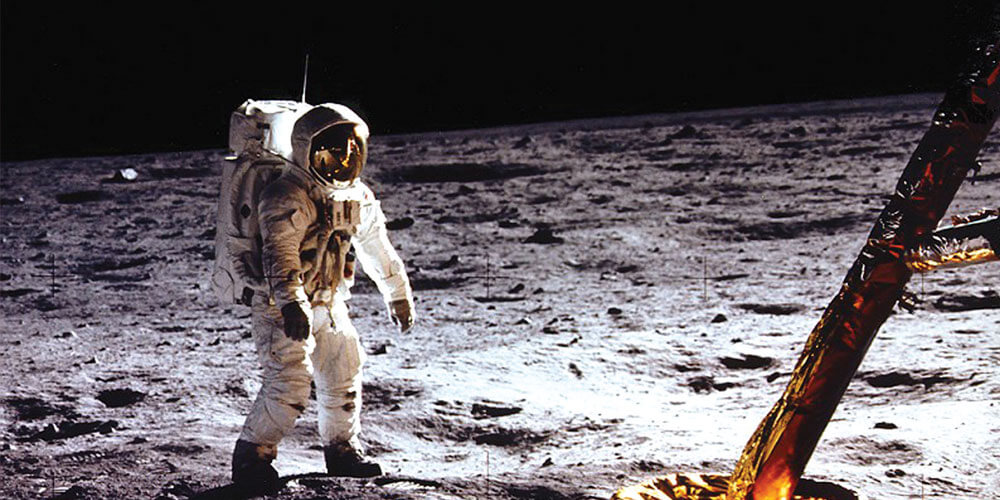 “It suddenly struck me that that tiny pea, pretty and blue, was the Earth. I put up my thumb and shut one eye, and my thumb blotted out the planet Earth. I didn’t feel like a giant. I felt very, very small.”

This week marked 50 years since Neil Armstrong stepped foot on the moon, and it’s fair to say that we have come a long way in that time.

It took 400,000 people to put Armstrong and Buzz Aldrin on the moon in 1969. It’s also said that the computers on board the Apollo 11 spacecraft contained less power and technology than the smartphone that you hold in your hand today.

And yet, as NASA prepares to return to the moon by 2024, it’s worth noting that some of the technologies used all those years ago are still relied on today.

Now, NASA is investing billions into new technology that will see humans visit the moon for the first time since the maiden mission, which captured global attention.

There will be one notable difference on this visit – the astronauts won’t be coming home for some time.

“President Donald Trump has asked NASA to accelerate our plans to return to the moon and to land humans on the surface again by 2024,’’ Mr Bridenstine said in a statement in June.

“We will go with innovative new technologies and systems to explore more locations across the surface than was ever thought possible. This time, when we go to the moon, we will stay. And then we will use what we learn on the moon to take the next giant leap – sending astronauts to Mars.”

It is hoped that the mission will reveal further understanding of exploration, scientific discoveries and insight into how humans could live sustainably on another planet. Essentially, the complex plan to establish a sustainable human presence on the moon by 2028 is a test bed for building a community on Mars.

But, first things first. NASA plans to launch the research Mars Rover next year to address “high-priority science goals for Mars exploration, including key questions about the potential for life on Mars.”

It will be a challenge, with hopes of landing the rover in the 45-kilometre wide Jezero Crater.

As for the moon, the human Artemis mission will begin in earnest later next year when the first commercial deliveries are launched. Scientific and technology instruments, as well as the Gateway spaceship, which will support the human missions to the surface, will be delivered.

The first space launch tests will kick off in 2022, building towards the 2024 goal. Among the team will be the first female astronaut to visit the moon.

The eventual 2028 milestone will be the first time humans spend a substantial amount of time exploring vast regions of the  surface. In comparison, the 12 Apollo astronauts who previously reached the moon have a combined total of 80 hours on its surface.

It will then be at least another two years before NASA tackles Mars. In the meantime, private enterprise is forging ahead with billionaire and SpaceX CEO Elon Musk aiming to establish the first base on the red planet in 2028.

He has famously stated that humans will be living in a Mars city by 2050. In addition, the United Arab Emirates has plans to establish a 600,000-people strong city on the foreign planet by 2117.

Funded by the UAE, with support from NASA, the Hope Mars Mission will launch in 2020 and reach Mars the following year. There are plans to construct a complex of buildings called the Mars Scientific City, which will comprise laboratories for food, agricultural testing, energy and water.

Australia is also taking steps in seeking out opportunities within the space industry. This week, AAP reported Australia set up its own space agency in Adelaide 12 months ago and is keen to work with NASA for opportunities to be involved in its Artemis program.

“That doesn’t necessarily mean that we will be sending an astronaut to the moon or to Mars but it doesn’t exclude it either,” Australia’s Industry Minister Karen Andrews said. “We are part of the space race, we want a bigger part.”

Australia’s space agency works with industry and researchers to maximise opportunities for the country, AAP reports.

In addition to his moon to Mars plan, US President Trump has also flagged a ‘space force’ aimed at a space warfare, but Ms Andrews said she has not be involved in any discussions in relation to that.

As the Western world stopped on Sunday to remember the 50th anniversary of the moon landing, Apollo 11 astronaut and lunar module pilot Edwin ‘Buzz’ Aldrin shared his thoughts with My Weekly Preview about the history-making mission.

July 16, 1969, the launch date. Tell us about it.
Launch was almost imperceptibly smooth through the early abort modes, and nothing unexpected happened. We knew we were accelerating, but the launch was so smooth compared to Gemini launches that we did not know the instant of leaving the ground.  We only knew it from the instruments and voice communications which confirmed lift-off. We saw our rate of climb, altitude changing, but were comfortable in our seats. We looked at each other and thought, ‘We must be on our way. What’s next?’

How was the moon landing?
As for being on the moon, well, getting down was interesting. As we approached, we levelled off and kept moving down and forward to land. We knew we were continuing to burn fuel… then we heard 30 seconds left. If we ran out of fuel, we knew it would be a hard landing!

We saw the shadow in front of us. That was new, not something we saw in the simulator.

The light turns on. Neil remembers we shook hands, and I recall putting my hand on his shoulder. We smiled.

How did it feel to exit on to the moon?
Once down, we climbed down the ladder and out. As Neil descended… he announced, “One small step for man, one giant leap for mankind”. I then got in position to come down. When I got off and looked around, and it was easy to balance, I said ‘magnificent desolation’. It was magnificent desolation. I think Neil remarked on the beauty too.

Tell us about your return to Earth.
Well, we would later relax in confinement,
but at the time I focused on a procedure associated with splashdown. Coming down, we had to wait until we hit the water, and you are not quite sure what altitude you are at. On splashdown, we had to throw a switch to release the parachutes, only it was a bit bumpy, so we tipped over before we could release the parachutes. The balloons tipped us right side up again. It was good to be back, eventually to see and talk with family. When we arrived on the carrier deck, we were placed in a containment trailer and it had a window. When they played the national anthem, we wanted to stand.

On reflection how do you feel?
The Apollo 11 mission was many things to many people. To me, it was the dream we had all signed up to chase, what we had imagined, worked and trained for. The apex of national service to a country we unabashedly loved. The height of aviation and exploration. Hundreds of millions saw their own reflection in our visors, efforts, risk with purpose, doing what had not been done before. Even now, we say: If America put men on the moon, what can’t we do?  And that sentiment is right. We did then – and we can do now – whatever we put our combined minds to. So, Apollo 11 was a dream-come-true for all of us. A launch so smooth we had to look at dials to confirm we were off – an extraordinary journey made possible by tens of thousands of extraordinary patriots; a bit of excitement on descent, making footprints in moon dust. It was a privilege to have been able to undertake the first manned mission to the lunar surface, an honour to have worked with so many good and dedicated people, and to have left our footprints there. Even now, sometimes, I marvel that we went to the moon. But now, I think, it is time for the next generation to buckle up, get back to the moon, and get on to a permanent presence on Mars.

The last time humans travelled beyond lower Earth orbit was 47 years ago in December 1972. NASA’s Apollo 17 was the sixth and final manned spacecraft to land on the moon.

Voyager 1 is the most distant man-made object from Earth. It launched almost 42 years ago and left our solar system to enter interstellar space in 2012. It still communicates with NASA daily.

The first known interstellar object to visit our solar system – a 400-metre long rock – was discovered in 2017. Named Oumuamua, it travels at about 87.3 kilometres per second and provides an insight into how other solar systems
are formed.

There are more than 500,000 pieces of space junk tracked as they orbit Earth and millions more that can’t be tracked. Even a fleck of paint can damage a spacecraft due to the speed of travel.

Day of the drone
Stepping into a bright future