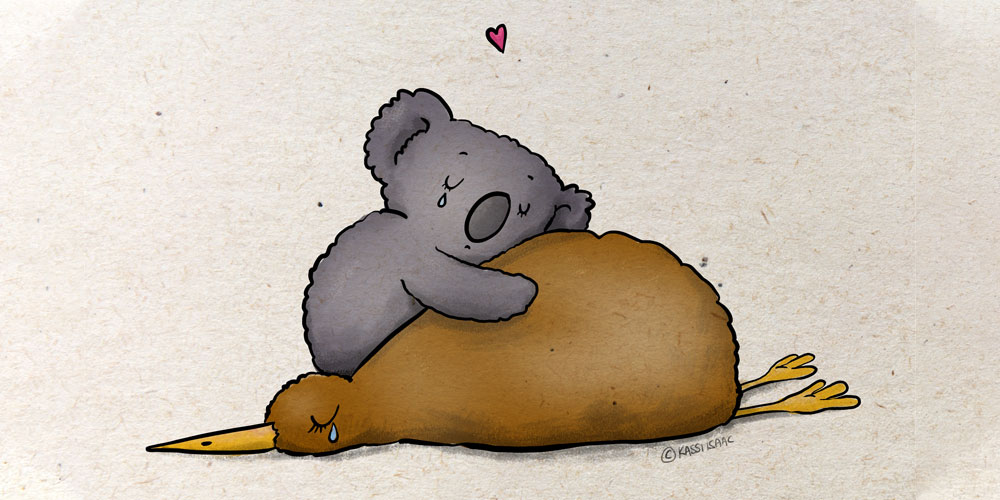 As news rippled around the world about last week’s massacre, which left 50 people dead and 50 injured at two Christchurch mosques, a Caloundra woman struggled to deal with the news.

Professional illustrator and graphic designer Kassi Isaac picked up a pencil and poured her sadness into a simple but poignant sketch.

Something about her touching illustration depicting a koala hugging a kiwi struck a chord with the online community when Mrs Isaac shared it on her Instagram page.

High-profile identities including Mia Freedman and Jessica Rowe shared the image, along with Channel 7’s Sunrise.

The illustration has now gone viral, being shared across Facebook, Twitter and Reddit, capturing the Australian sentiment towards our New Zealand neighbours on what Prime Minister Jacinda Ardhern described as New Zealand’s darkest day.

“I felt like I really wanted to do something because it’s such a horrible thing that no words can describe,” Mrs Isaac says.

“I was just doodling on the back of my daughter’s sketchbook but already in my mind I was pretty firm with what it would look like.

“I’ve tried to keep my daughter a little distant from the event as its very upsetting and very hard to explain to a five-year-old. I just told her, ‘something really bad happened’. But when she saw the sketch I drew, she asked what it was and why the animals were so sad.

“I said it was a little koala consoling a kiwi about the ‘really bad thing’ that happened that day. She looked at it, visually upset, grabbed a red pen and drew a heart above and said, ‘this will make it better’. I thought, yep, that completes it.”

After putting her daughter to bed that Friday night, Mrs Isaac couldn’t sleep and decided to render the illustration and post it to Instagram.

“I wanted to share what was in my heart, share a bit of grace, love, light and unity for all and to somehow visually say how I felt. I really like the image because it’s not a race, it’s not a religion, there’s a humanity in it. There’s some innocence and pure emotion captured.”

When she woke up and saw how many times her image had been shared, how many comments poured in from as far away as London and Los Angeles, she was humbled.

She resigned last year to focus on her family and is hoping to launch her own business later this year, an illustrative-based children’s clothing label featuring koalas – but they won’t be sad like the koala that has found its way into the hearts of millions.

“With this illustration I was hoping to put the love or the feeling back into what’s happened,” she says.

“Hopefully we can have more unity and acceptance and tolerance. I think Prime Minister Ardern has been amazing. I was talking to my husband about it. I think it’s horrific, but she’s the best prime minister for what’s happened.

“I think it’s really important the victims feel supported and New Zealand feels supported. It’s so tragic with 50 dead and so many injured.

“If you think of the children or husbands or wives that have been affected, then it’s directly going to affect that number again. You’re just ripping apart families on such a huge scale. I think what’s scary and touching for us in Australia is it’s too close to home. It could have been here.”

To offer your support, visit givealittle.co.nz/cause/christchurch-shooting-victims-fund

Is your technology spying on you?
Running for a good cause