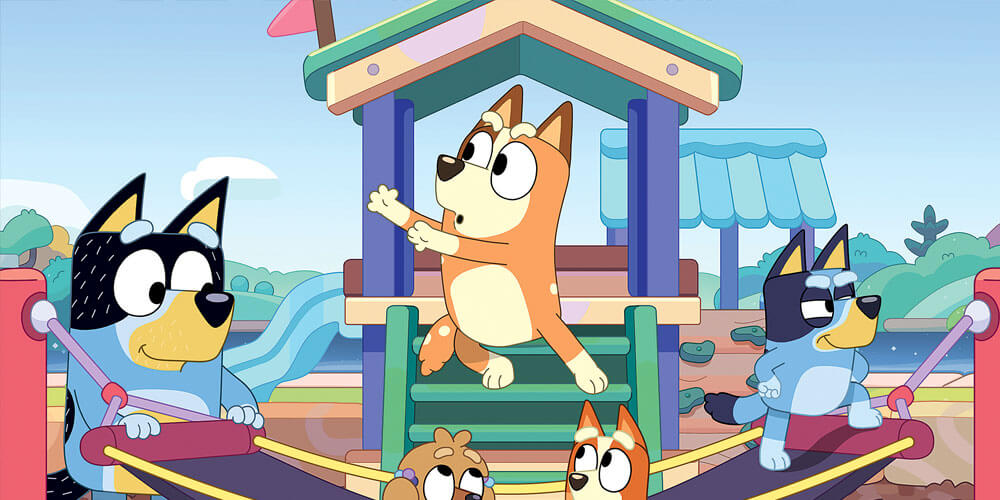 Australia has fallen head over heels in love with the ABC Kids show Bluey, which follows the adventures of a six-year-old blue heeler who loves to play and turn every day life into extraordinary adventures.

With more than 40 million downloads since its launch only six months ago, it has become the most watched program ever on ABC iView – and three of the show’s key players hail from the Sunshine Coast.

The Sunshine Coast’s Daley Pearson is one of the executive producers of the program and the co-founder and director of Ludo Studios, the Emmy award-winning production company and animation studio behind Bluey’s phenomenal success. Another of the show’s producers, Sam Moor, is from Buddina and animator Caitlin O’Brien is from Buderim.

Last week it was announced BBC Studios and Penguin Random House would bring three Bluey books into Australian stores by Christmas and deals for international distribution are underway, with Mr Pearson and his team taking the risky move of stipulating the characters’ accents must remain true-blue Australian.

“It was a big thing to insist on because you could lose sales,” Mr Pearson says. “You never know if you’re going to upset someone.

“We had amazing people who were interested and loved it and we wanted to go with them, but then the subject of dubbing started coming up. We had a discussion and decided we weren’t going to change the accents [for English-speaking countries]. Fortunately, it went over really well and everyone agreed really quickly.”

Bluey’s widespread appeal lies in its charming storylines centred around family life with a mum, dad and two daughters finding themselves in everyday scenarios both children and adults can relate to.

“Part of Bluey’s appeal is that it has never spoken down to kids; it has always been on their level,” Mr Pearson says.

The dialogue is very Australian, without being too ‘Crocodile Dundee’, in the words of Mr Pearson. It’s a show families genuinely love to watch together, with plenty of laughs for all ages.

The show is set in Brisbane and features sub-tropical leafy streets and Queenslander homes. It is created using animation software called CelAction, which Ludo Studios trained its team of 50 animators to use. For many of the show’s animators, it’s their first job and Mr Pearson is proud of the opportunity the show has created for up and coming Queensland animators.

“I grew up in Coolum and went to school in Nambour,” he says. “The first show I did was based in Coolum. It was called The Strange Calls and was a comedy we made for the ABC. They did a remake at NBC in the US. That was our first door opening to wanting to do local stuff.

“I met Joe [Brumm] who created Bluey a few years ago now. He had this amazing idea and had done a lot of time in London and worked on Charlie and Lola. He came back and said he’s waited 10 years or so to create this show.

Since its premiere on October 1 last year, Bluey has topped the iTunes Kids Chart, peaking at number one and consistently remaining in the top five.

So just what is the magic formula that has resonated with so many people?

“I think Bluey is the best thing in the world and I think it has come at a good time,” says Mr Pearson. “I don’t think Australia has had a family show like this for a little while. Its bracket is preschool, but we set out for it to be a co-viewing show. Often when you say that it’s a bit of a lie, but I think Joe has accomplished that. It’s got the relationship between parents and kids, the games they play as a family, it’s got the City Cat, Newfarm Park, the parents have a  condo on the coast, they Skype from their apartment. A lot of those little things add up to more and more relatability.

“It’s also quite authored. We made it in Brisbane, which isn’t known at the moment as a big industry town. We’ve been able to create it quietly and only look at our lane. Mum always said that in swimming races – just look at your own lane, don’t look at the people in the other lanes.

“I feel like if we were in Sydney or LA we might get a bit distracted and we may not have been able to create something as authored as we have. The more you go into yourself, the more appealing it is. The more Brisbane or Queensland it became, the more universal it got.”

The second season of Bluey is set to air mid-year.

We will remember them
Lightning ready to roll