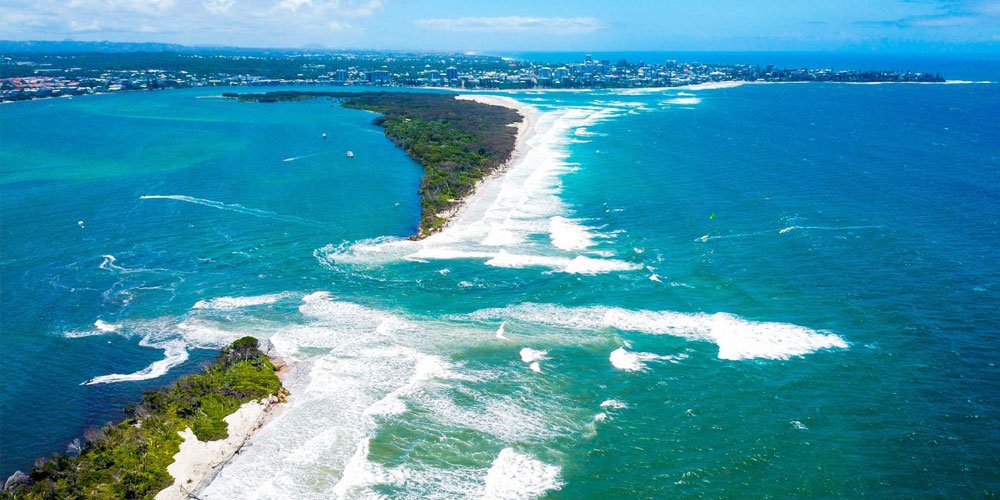 The new northern island, with Caloundra in the background. Image: Zane Jones

On January 2, powerful king tides and a flurry of wild seas left in the wake of ex- tropical cyclone Seth caused the northern tip of Bribie Island to split.

Being described as the ‘Bribie breakthrough’ the tidal event is now leaving Pumicestone Passage and nearby Golden Beach exposed to the uncertainties of Mother Nature.

The future of the idyllic waterway remains unknown with conditions changing daily and a dangerous and unofficial ‘South Bar’ at Caloundra proving tumultuous for boaties and water users. The breakthrough is around 330 metres wide and getting bigger daily.

Pumicestone Passage is a 35-kilometre channel of pristine water, which is part of the Moreton Bay Marine Park, stretching from the tip of Bribie Island near Caloundra in the north, to Deception Bay in the south.

The passage has been protected by the fragile strip that forms the northern tip of Bribie Island, creating a calm and attractive waterway for recreational use off Golden Beach.

Aware of its fragility and susceptibility to erosion, Sunshine Coast Council has had a Bribie Island Breakthrough Action Plan in place since 2014, which outlines the threats to the Golden Beach foreshore in the event of a breakthrough at Bribie Island, and actions to help the council reduce these effects. 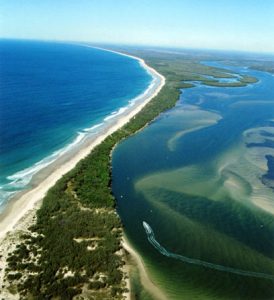 On December 14, 2020, pounding seas began breaching Bribie, with waves breaking through to Pumicestone Passage and carving a channel through the island.

At the time, the Department of Environment and Science (DES) conducted an urgent assessment of the heavily eroded northern section of Bribie Island, describing the event to My Weekly Preview’s sister news site, Sunshine Coast News, as an “unprecedented ocean breakthrough”.

According to the DES, although this section of Bribie Island has a long and natural history of erosion, this is the first time waves have broken through the dune on this section of the island.

On January 2, two kilometres from the tip of Bribie Island, heavy conditions created by ex-tropical cyclone Seth combined with king tides of up to 2.2 metres broke through to the passage in line with Nelson Street at Golden Beach.

The Caloundra Coast Guard at the time estimated the channel to be around 330 metres wide, which has since been presenting issues and warnings for water users, thanks to unstable currents and tides creating a ‘dangerous vortex’.

Concerns then rose among the community about further erosion and possible inundation of nearby communities.

The chair of the PPCMB and the CRA, Graeme Smith, says the channel will cause “massive” issues for local residents and the environment.

“The breakthrough has drawn a higher level of water inside the passage,” he says.

“That, at high tide, will create flooding on Golden Beach and Pelican Waters roads.

“The houses along Diamond Head and the southern Golden Beach area are only one metre to 1.5 metres above the normal astronomical tide level.

“We’ve had king tides before and we’ve had storm surges with them that have created some flooding … but things are now different.

“The breakthrough has effectively changed the high-water level inside the passage at the northern end, by about 400 millimetres to 500 millimetres.

“If we get a storm surge, we’ll get much greater flooding than what we’re already getting.”

The state government’s principal coastal scientist is predicting the Bribie Island breach may become the “dominant” entrance to Pumicestone Passage.

In fact, the entrance to Pumicestone Passage has been known to move over the course of history and used to be 700 metres south of where it is. This is right about at the point of this breakthrough.

Sel Sultmann says the opening will likely remain, but there are no plans for “remedial actions”.

“The new channel may become the dominant entrance to northern Pumicestone Passage and if this is the case it is likely the existing entrance [the Caloundra Bar] may slowly infill,” he says.

“DES will continue to monitor the breakthrough, and boaties and people on Bribie Island are advised to avoid the area due to instability recently caused by the weather event.

“While natural processes will continue to occur in this dynamic environment, it is unlikely that there will be any adverse impact to the community or properties at Golden Beach.”

While the state government is responsible for the management and monitoring of Bribie Island as it is a National Park, Sunshine Coast Council monitors any impact to coastal communities, like Golden Beach.

The council’s coastal and canal manager, Michael Anderson, says the council has been monitoring the passage regularly, and its erosion north or Lamerough Canal, since the breakthrough.

“It’s a very dynamic area at the moment and to fully understand the longer-term impact of the breakthrough on Golden Beach we need the channels and banks in the Pumicestone Passage to stabilise, which should happen in around May after the storm season has finished,” he says.

“We’ve also observed changes in the tide heights resulting in the high tides being slightly higher and, in reverse, the low tides slightly lower.”

A tidal gauge at Military Jetty will allow the council to measure the level of the tides and scientifically determine the changes to the amount of water flowing in and out of the passage, which may cause ongoing erosion impacts on Golden Beach.

To mitigate erosion, a dredge has now arrived on site near Jellicoe Street and is expected to remain in the passage until mid-year. It will focus on replenishing sand to council-managed areas impacted by erosion.

The seawall south of Jellicoe Street to Nelson Street will also be upgraded this year to further protect the area.

Having made several rescues and watercraft salvages over recent months, Caloundra Coast Guard is urging people to stay away from the area, especially with a new bar forming.

“The new ‘South Bar’ at Caloundra is dangerous,” a statement from Caloundra Coast Guard reads.

“It is currently an undeclared coastal bar that no one knows much about yet. The bar is expanding, sand is moving, and it is simply treacherous, different every day.”

The council has set up a dedicated webpage to keep the community updated at sunshinecoast.qld.gov.au/bribieplan. This webpage will be updated regularly.

Continue Reading
You may also like...
Related Topics: Bribie Island