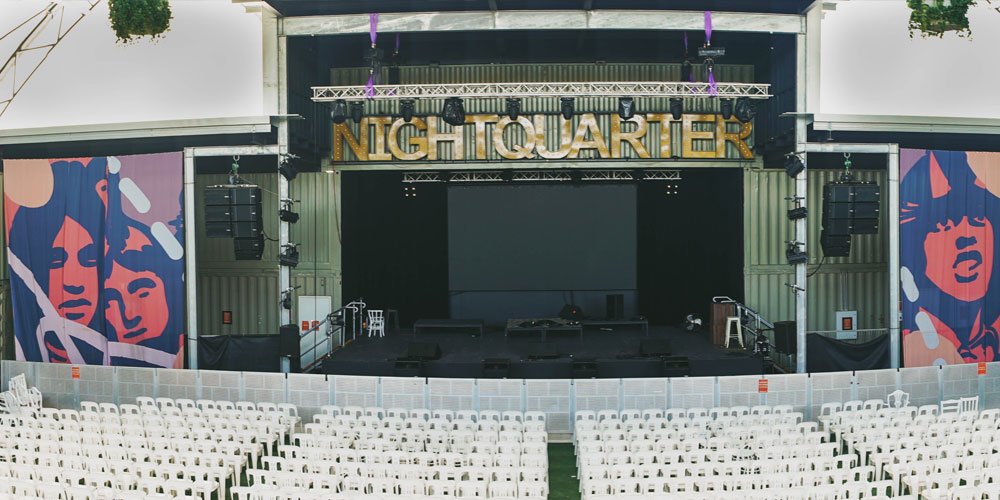 The operators of the award-winning NightQuarter entertainment precinct have vowed to continue their support of the live music industry despite being left devastated by the shock shutdown of their music space.

The order would be in effect “until the end of the declared public health emergency’’, or until approved controls were put in place. The direction did not relate to the night market, only the concert space within the precinct.

Speaking with My Weekly Preview this week, NightQuarter’s Michelle Christoe says Queensland Health has “ripped the lifeblood” from the business and jeopardised the livelihood of 400 Sunshine Coast people. She and partner Ian Van Der Woude deny any breach. They say the concert in question had been managed in accordance with their COVID Safe Plan.

“We’ve had to cancel a million dollars’ worth of events this past year,” Ms Christoe says. “This venue supports over 400 jobs. We are talking about a lot of jobs for the Sunshine Coast. The people we employ own small businesses. They live week to week, some of these people, and they didn’t anticipate this loss of income.

“We had two ticketed events we had to cancel. People come in from out of town for these. There is the trickle-down effect. People had to cancel accommodation. It affects tourism, too.

“They haven’t done this to anyone else. I have spoken to other venues and Queensland Health haven’t even visited them. We have had officials here almost every weekend. Anyone who has worked with us closely know how seriously we take COVID. I can say hand over my heart that I’ve done the best I can.”

Ms Christoe says the organisation will continue supporting local and national talent in some shape or form.

“How is sport different to a live music event? I love sport,” she says. “I’m not trying to kill sport, but what we’ve been through, we’ve been targeted because we’ve spoken out on behalf of the music industry for so long. We are passionate about it. We can’t control people’s social distancing if it’s not consistent everywhere [at every type of event]. We work to our approved plan, we work with patrons to enforce the plan.”

Chief Health Officer Dr Jeannette Young says the shutdown relates to “repeated breaches” of COVID safety rules which the health department had tried to get rectified.

“We have worked closely with the operators of NightQuarter for several months in an attempt to help them continue operating in accordance with the Queensland Public Health Directions.

“However, there have been repeated breaches of these directions and several complaints by members of the community in relation to occupant density and physical distancing requirements during events.”

The standing event in question had been modified to include fixed allocated seating after consultation with Queensland Health in April and was managed with detailed briefings with staff and security, signage and event management plans.

Dr Young said in a statement the risk of COVID-19 transmission in confined spaces such as stage and dance areas was “far greater” than the risk at open-air venues like sporting stadiums.

Continue Reading
You may also like...
Related Topics: NightQuarter

My Weekly Preview picks up state award
Thank you Bloomhill