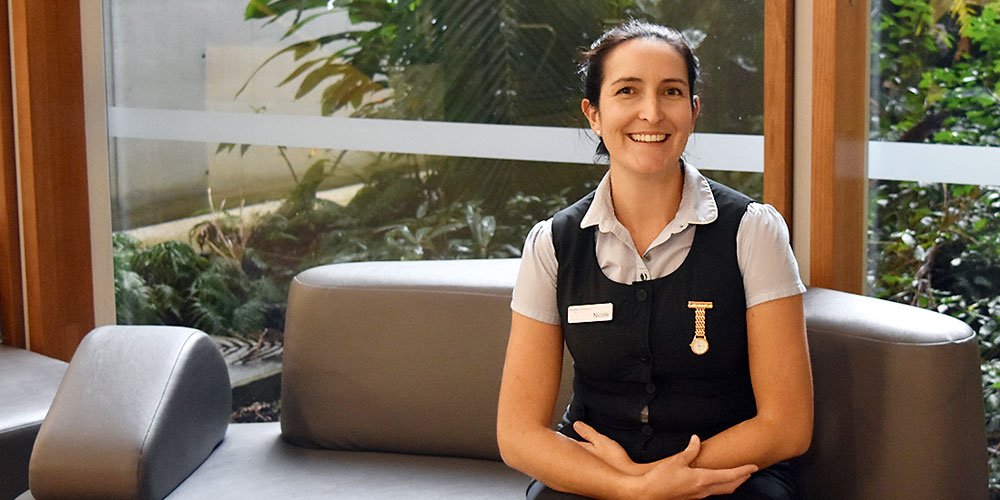 Nicole Wright began her working life as a chef and wedding caterer, first in Melbourne, then in Noosa. It wasn’t until she had her first child that she realised her chosen career was no longer making her happy. The hours and conditions didn’t suit her and she wanted more security in her future employment. So in her thirties, with two young children in tow, the Buddina mum enrolled to study nursing at the University of the Sunshine Coast (USC).

“I started studying when Oliver my youngest was just a few months old and still breastfeeding,” she says. “I’m not going to lie, it was challenging, but you do what you have to do. Before I enrolled, I talked to the careers team at the university about what sorts of jobs there are on the Coast to make sure I was going to have a job at the end of it. I decided nursing provided a lot of scope for different areas you could get into. If you’re going to university when you’re mature aged, you don’t have as much time to progress through your career and you want to make sure you’ll have a career at the end of the study.”

Having been out of school and in the workforce for years, Mrs Wright was nervous about coping with the study. She’d been to TAFE to become a chef, but doubted her ability to study at university level. She did the Tertiary Preparation Pathway course, which gave her confidence, and went on to win academic awards and medals.

“I never set out to get those results,” she says. “I just applied myself and really enjoyed the study. I’ve almost come to the end of my graduate year and I have loved every minute of it. It has been incredibly challenging, but I have experienced so much personal and professional growth.”

Now 36 and employed as a mental health nurse at Sunshine Coast University Hospital, Mrs Wright says she has found the right career and will continue to work in health care until retirement. Her advice to anyone considering going back to study for a new career is to go for it.

“The most important thing is to be true to yourself,” she says. “If you have an area of interest, pursue it. That sense of self-doubt just holds you back, so put that aside. If you really want something, you’ll get it. I can’t imagine I would ever change careers now. I love it and I wish I had started sooner.”

Over half of all domestic USC students are non-school leavers – or what used to be known as mature-age students. According to vice-chancellor, Professor Helen Bartlett, the university has seen an increase in early-bird first preferences to study at USC for both school and non-school leavers.

“This may be due to more people working from home or who have had a change in employment circumstances and are rethinking their life and career objectives,” Prof Bartlett says. “Economic downturns typically coincide with increased demand for tertiary education, but it is particularly interesting to see that, across Queensland, there has been an increased demand for health and education programs, as well as more applications from interstate.

“We have also seen an increase in registrations for Uni Skills for You, a free course for anyone thinking of taking the first steps to study at university or TAFE. It is run online over four weeks or face-to-face over two consecutive days and is popular with non-school leavers.”

“I wouldn’t advise anyone to switch careers if you need a degree to do it,” she says. “People should only do a degree when they 110 per cent know that’s what they want and they need that piece of paper. I’m not a fan of higher education later in life. It might be a controversial viewpoint, but a degree isn’t necessarily the answer for a career change. If you’ve always wanted to do something or had a passion for a year or two, then sure. But doing a degree doesn’t guarantee you a job at the end of it. I have a lot of university graduates coming to me who can’t find jobs.

“If you are older and have work experience, then work out who is your ideal boss, your ideal company size, what makes you tick internally.”

Mrs Langford says the majority of her clients are people between 40 and 60 who are re-evaluating their lives and careers. They may have been made redundant or lost a job due to downsizing. Many found COVID gave them time to stop and realise they were no longer happy.

“We find a lot of people are coming to us and wanting a resume done,” she says. “We ask them, ‘what do you really want to do?’ They actually don’t know. People are starting to question what is going to make them happy. I think values have changed. It’s more about finding a boss that will give them flexibility or understands family life and work-life balance. People are steering away from that workaholic mentality.”

Mrs Langford says challenges people seeking a career change face include being pigeonholed for too long, lack of confidence and pay cuts.

“Culture fit is more important than skill set these days. An employer can teach skills. Culture fit is about work ethic, how they get on with the team, what they bring to the culture in regard to positivity, flexibility, doing whatever the business needs, being on time, not being a high-maintenance employee and wanting time off every week, calling in sick too often.”

Australians are increasingly working to older ages, according to the Australian Institute of Health and Welfare. But in a survey of more than 1000 Queensland SMEs, the Ageing Workforce Report (Office of Industrial Relations, 2019) found most employers believe people are too old for full-time work by 65. More than half the respondents reported their organisation is not considering strategies to attract and retain older workers, and do not have any policies in place regarding older workers.

Mrs Langford says there is no age at which we become unemployable.

“You could be 62 and wanting a career change, even if you only have three years left. Maybe it’s not about becoming a manager. Every day you have to work is worth changing if you’re not happy. Don’t give up on being able to find something you enjoy. Resilience is key, because you will get rejections.”

TAFE is a good option for older workers who feel they need to upskill but don’t want to commit to university, with 20 per cent of TAFE Sunshine Coast students over 40. According to TAFE Queensland executive director education and training (East Coast) Mark Reilly, TAFE allows for a faster transition into a new career than university.

“Changing careers and starting over again is an exciting prospect for many people, but it can also be incredibly daunting to leave the comfort zone of your existing industry in pursuit of the unknown,” he says.  “Our courses are highly practical from start to finish and shorter than the typical university degree, enabling our students to get a feel for their new career without committing to years of study. When they graduate, our students have the valuable skills and qualifications they need to secure successful employment, but they also have the ability to further their studies if they choose, whether that’s through TAFE Queensland or direct entry to a program at one of our partner universities.”

Mr Reilly says courses in the health services, community services, education support and accounting are particularly popular among students over 40 on the Sunshine Coast, but there are mature age students participating in everything from beauty and business to fitness and IT. 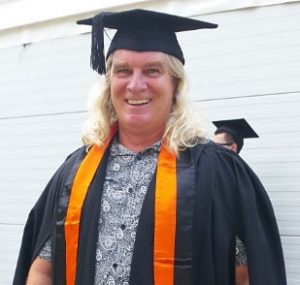 Dean Hanley is a 51-year-old Diploma of Youth Work graduate from the TAFE Mooloolaba campus. His is a story of triumph against the odds.

Having surmounted considerable personal challenges in his youth, he found a job in drilling that provided a lucrative income but no job satisfaction. He’d always felt compassion for the underdog, so he chose to change careers and now works with at-risk people between the ages of 16 and 25 as a youth mobile homeless support worker with Vinnies. But what’s extraordinary about Mr Hanley’s is he couldn’t read until he was 38.

“I was so passionate and was always the person front and centre in class,” he says. “I was willing to participate and my passion saved the teachers from tapping me on the shoulder and asking me to come back when I could read better. I put a lot of effort into it – what you put into it is what you get out of it. With life, it’s those passionate moments that define you.

“I’ve since gone back and got an advanced diploma in community sector leadership and management – as I’m getting older, I thought I’d prepare myself for the next phase of my career.

“I had to take a big pay cut to do this work, but now I’m getting more emotional value out of my existence. The financial benefit has declined, but because I’m more fulfilled, I end up with more disposable income than I ever used to. I was purchasing happiness before. I was purchasing happiness through toys, going out for dinners. I don’t need to do that anymore because I’ve found my calling.”

So what does Mr Hanley have to say to anyone considering a career change later in life?

From 2011 to 2016 there were an extra 90,000 students above the age of 25 enrolled at university. Around two out of every five of those students had not yet already received a bachelor’s degree.

A rather wet sense of humor
Who will win Sunshine Coast Art Prize 2020?