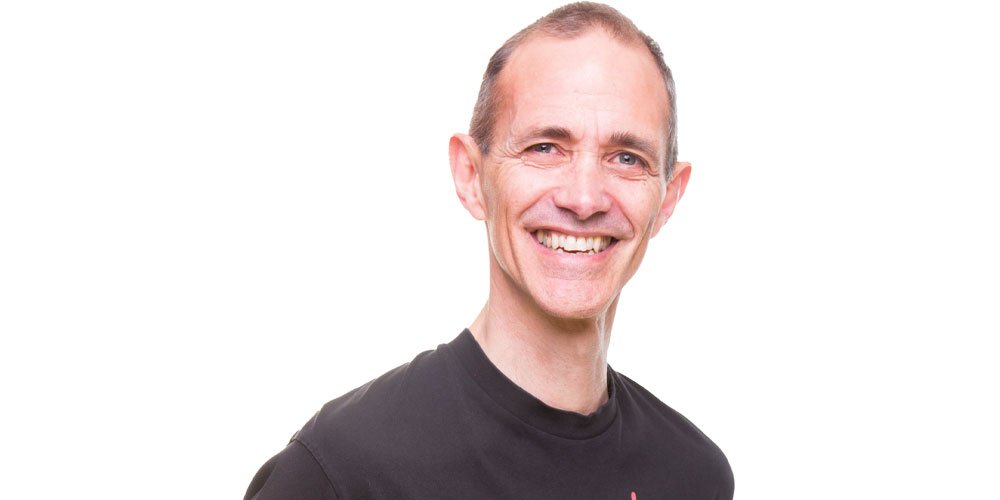 Internationally acclaimed author Andy Griffiths has one message for children – put down your screens and experience life for all its wonder.

If Mr Griffiths had been drawn into a world of tablets and mobile phones in his childhood, the Treehouse book series would never have been conceptualised and become the international phenomenon that has spanned 11 books and 10 million copies in more than 35 countries.

Mr Griffiths, who regularly visits the Sunshine Coast on book tours, credits his unbridled creativity to a “magical” childhood spent “freewheeling and free ranging”. It allowed him to see the world as full of limitless possibilities.

“[Australian author] Morris Gleitzman once said that children’s authors are a breed of human for whom the window between childhood and adulthood remains open,” he says. “It makes it easy for us to access those moments in life and the feelings that come with being a pre-pubescent child where imagination has no boundaries. It supercharges what we can create.”

The “we” is Mr Griffiths and his partner in crime, illustrator Terry Denton. They have collaborated on more than 33 bestselling books since their first title,
Just Tricking, was published in 1997. The 13-Storey Treehouse was released in 2011 and their latest, The 143-Storey Treehouse, was released earlier this week.

Mr Griffiths is a passionate advocate for literacy. In 2015 he was awarded the Dromkeen Medal for his contribution to Australian children’s literature. He is also an ambassador for The Indigenous Literacy Foundation and The Pyjama Foundation.

His quest to get more books into young children’s hands was sparked when he was a schoolteacher. He had two choices when dealing with his students’ reluctance to read – give them a lecture or come up with something outside the box. “I ended up giving them ridiculous things to read, stories that I made up, photocopied and stapled together for them,” he says.

“Reading is a legitimate pleasure in itself that involves a very intimate game between the author and the reader. It’s a game of let’s pretend, let’s make believe.”

Seeing the delight the students took in devouring his tales prompted Mr Griffiths to seek out a career in publishing children’s books, which was a process of trial and error before he struck gold with Mr Denton.

“Reading for me was an escape hatch to wonder, mystery and excitement. This drove me to writing specifically for kids.

“This is the voice that came through and it suited the students I was teaching at the time. I wanted to write books that would convince the modern generation that books were not some old technology that could be replaced by film and TV.”

Mr Griffiths worries creative pursuits are being squashed by the increased use of screens by the younger generation.

A report released by Reviews.org in April found Australians spent an average of 5.5 hours a day on screens, equating to 33 per cent of our waking hours, or a whopping 17 years across a lifetime.

This number is significantly higher the younger the person, with members of Generation Z, who are aged between nine and 24 spending more than seven hours a day looking at screens.

While this surprises Mr Griffiths, he says he has never been a “technophobe.”

“The boring truth about everything is that you need balance,” he says. “If you have something in excess, it is going to squeeze the time for things like physical movement, the quiet contemplation that reading brings and unstructured time, which is when creativity comes out.”

The author of several books, including new releases It’s a Girl Thing and Oh Boy!, says adults need to play a more active role in monitoring the amount of time both themselves and their children spend on devices – even so-called educational apps.

“A study published in 2015 sarcastically noted that of the 80,000 ‘education’ apps the researchers examined, the vast majority amounted to nothing more than ‘digital candy’… great to get you hooked on but with little substance in terms of learning outcomes. That same year, the Organisation for Economic Co-operation and Development (OECD) published a report noting countries that had invested heavily in technology had shown no signs of improvement in reading, maths or science. OECD head of education Andreas Schleicher went on record saying, ‘the reality is that technology is doing more harm than good in our schools today’.”

Dr Nagel says excessive screen use can be linked with various types of addictive behaviours along with physical, social, psychological and neurologically adverse consequences.

“Key components in potential adverse consequences include duration of use, content accessed, after-dark usage and media type. In scouring the ever-expanding lists of studies related to screen effects, the story being told is worrisome… with physical effects including, but not limited to, poor sleep, risk factors associated with cardiovascular disease, obesity, poor stress regulation and insulin resistance.

“Now put this into the context of a brain that isn’t fully developed until we are in our twenties and there is reason to be concerned. The problem, however, is we just don’t know exactly how much time is too much time as we can’t set up a controlled experiment to see at what point screens start to do any damage.”

With his extensive knowledge, Dr Nagel recommends aside from TV, which is a passive device, no screen time for children under the age or two and from then throughout primary school, no more than an hour a day at home.

“Probably the only real benefit is when a device can be used to connect with others, which has become more prominent during the pandemic, but as we are seeing being with people in real time is better than linking up virtually,” he says.

There is a great deal of evidence showing the importance of creative arts in boosting academic outcomes over and above being tech-savvy, Dr Nagel adds.

“If we were sincere in boosting outcomes, we would take the money used to resource technology and use it to ensure all schools have ample resources in art, music, dance and drama. The creative arts are a far better gateway to doing well in school in comparison to screens.

“Reading for pleasure is also important, as is downtime or time to just be a ‘kid’.” 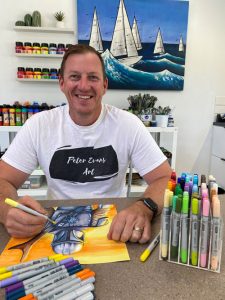 This is all music to the ears of Palmview artist and teacher Peter Evans. “I absolutely agree the creative arts are vital for children’s development because it boosts creativity, hand-eye co-ordination, risk taking, concentration, self-expression and communication skills,” Mr Evans says.

“We have three kids and I fully understand the issue of screen time that parents deal with, particularly in the school holidays. It does become their default entertainment when they can’t think of what to do with their spare time and parents are working from home also. We often get the ‘I’m bored’ line and my answer is always, ‘Good!’ Because that’s when you can be your most creative.”

Mr Evans says there is a place for technology, particularly in modern careers such as IT, graphic design and robotics, but the arts can help boost confidence in kids who struggle academically. “I see first-hand the growth in confidence in kids who pursue their creativity through art or other avenues,” he says. “Any support parents can give to these kids will only help them flourish through life.”

Average number of hours spent on a screen each day by generation. 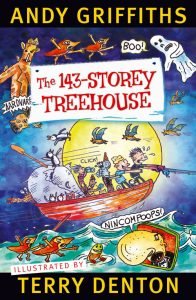 Treehouses a hit with readers

The release of The 13-Storey Treehouse in 2011 marked the beginning of a golden era for Andy Griffiths and Terry Denton.

After working through a variety of formats for books aimed at ages eight to 12 with what Mr Griffiths now calls “questionable humour”, they hit the sweet spot with the Treehouse series. This style of children’s book was inspired by the likes of Dr Seuss and Norman Lindsay’s The Magic Pudding, which were favourites of Mr Griffiths’ growing up.

“At some point, people decided that pictures were for babies, but I think that was a wrong turn,” Mr Griffiths says.

“Pictures enhance storytelling rather than being a crutch.

“Not only that, but it makes books accessible to kids so they can inhale the detail without having to plough through hundreds of words. It was frowned upon by publishers when we first started out.”

In each book in the series another 13 levels is added to the treehouse and when the duo gets together to brainstorm ideas, Mr Griffiths says they bounce off one another, with his stories inspiring Mr Denton’s drawings, which then inspire new and fantastical ideas for the storyline.

“Of course, my wife Jill is in there as well, letting us know when we are getting too silly and forgetting about the reader because we are too busy entertaining ourselves,” Mr Griffiths quips.

“Our improvisation is followed by a series of brutal rewrites and editing to get the balance just right… it is a deceptively long process, taking around a year to achieve a style where we can tell a complex story in as few words as possible and allowing the drawings to do the maximum amount of storytelling.”

The series started off as a trilogy, but with The 143-Storey Treehouse now hitting bookstores – the eleventh in the series – Mr Griffiths has hinted that maybe they will cap it off at book 13. “That may be the point in which we sail off into the sunset.

“There will definitely be something else on the horizon. We just never want to get to the point where we overstayed our welcome.”

The 143-Storey Treehouse is available in bookstores now.

Business in COVID crisis
Donate a phone to save a life