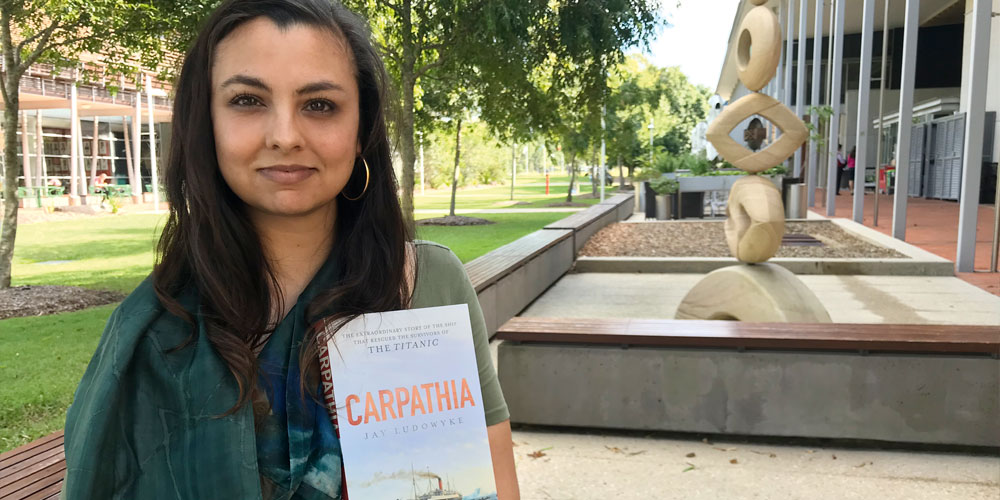 Dr Jay Ludowyke was watching an episode of Antiques Roadshow when she chanced upon the tale of the transatlantic steamship, the Carpathia. She’d been weighing up ideas for her doctoral thesis and this little-known story caught her attention immediately.

“Someone on the show brought along a medal that had been awarded to a crew member that served aboard the Carpathia, and I’d never heard of this ship,” she says.

“The story was that when the captain received the panic distress call from the Titanic, he didn’t hesitate to change course; he set sail at full speed in the night. The captain and his crew were risking the same fate as Titanic, weaving through icebergs to reach the sinking ship.”

The Carpathia arrived after the Titanic had gone down, but was able to rescue an estimated 712 passengers from the freezing water. It met its own fate during WWI when it was torpedoed by a German submarine.

“With the Titanic there’s an element of tragedy, but with this there’s a sense of heroism that appealed to me,” she says.

Born in Tasmania, Dr Ludowyke moved to the Coast at the age of 12. She began studying an undergraduate degree in archaeology in Brisbane, but switched to writing at the University of the Sunshine Coast (USC), where she completed her Honours degree.

With a view to pursuing an academic career, she enrolled in a Doctor of Creative Arts program, with a specialisation in written communication, and embarked on researching the extraordinary story of the ship that was overshadowed by the most famous shipwreck in history.

“I came to this with no maritime experience,” she says. “I just found a story that I wanted to write and it made for a steep learning curve. I had a research book in one hand and a dictionary in the other, looking up nautical terminology. It was like trying to learn a new language,” she says.

Over four years she researched the story of the Carpathia extensively and took a six-week trip to visit archives, museums and libraries in London, Newcastle and Liverpool. She was thrilled when USC agreed to fund the trip.

“I felt incredibly fortunate and also incredibly nervous,” she says of the trip. “I went to the UK quite early into the research period and I was nervous because I didn’t know what I was going to find. I had so many hopes.”

The result of her efforts is a narrative non-fiction paperback that covers the Carpathia’s beginnings as a passenger ship operating between New York and the Mediterranean, its involvement in the rescue of Titanic survivors, its use in World War I when it was sunk by a torpedo, and the modern expeditions to find and dive the sunken wreck.

She was able to discover more to the story than had previously been written about in any detail, making the trip an important factor in the book’s success.

With much enthusiasm, she tells of the discovery of part of Hadrian’s Wall in the shipyard where the Carpathia was built, with rocks from the ancient wall having been displayed in a glass case on board the ship.

“Hadrian’s Wall is 2000 years old and the end of the wall was found in the shipyard in Newcastle where the Carpathia was built,” she says. “There were beautiful connections between past and present, old and new.

“The story of the stones is the prologue to the book,” she says. “The stones are set up as this idea of treasure. The Carpathia didn’t go down with any gold bullion, or gems, but it did go down with these stones from Wallsend.”

Having graduated in April, Dr Ludowyke says attracting the interest of publisher Hachette was the “best possible outcome” for her project.

After sending her manuscript to publishers around the country to no avail, she booked herself a ticket to the Emerging Writers Festival in Sydney and pitched her book directly to Hachette’s non-fiction editor, who was equally captivated by the story. Within weeks, she had a book deal.

“I got a phone call and saw it was a Sydney number,” she says. “It was Hachette calling to offer me a contract for the book. The rest of that day I kept looking at my phone to make sure I hadn’t imagined it.”

Dr Ludowyke is now writing her second book and teaching creative writing at USC, while she fields calls from media around the country. She’ll appear on the popular ABC podcast Conversations on July 13, followed by an appearance on Studio 10 and a speaking engagement at the Australian Maritime Museum in Sydney on July 19.

The book will be launched at the University of the Sunshine Coast art gallery on July 17, timed to coincide with the 100-year anniversary of the sinking of the Carpathia.  The launch will feature live music, wine and canapes, with an introduction by Bruce Atkinson from ABC Sunshine Coast.

Carpathia: The extraordinary story of the ship that rescued the survivors of the Titanic is now in bookstores.

Attendance at the book launch is free. Places are limited and RSVP is essential. Visit carpathia.eventbrite.com.au.