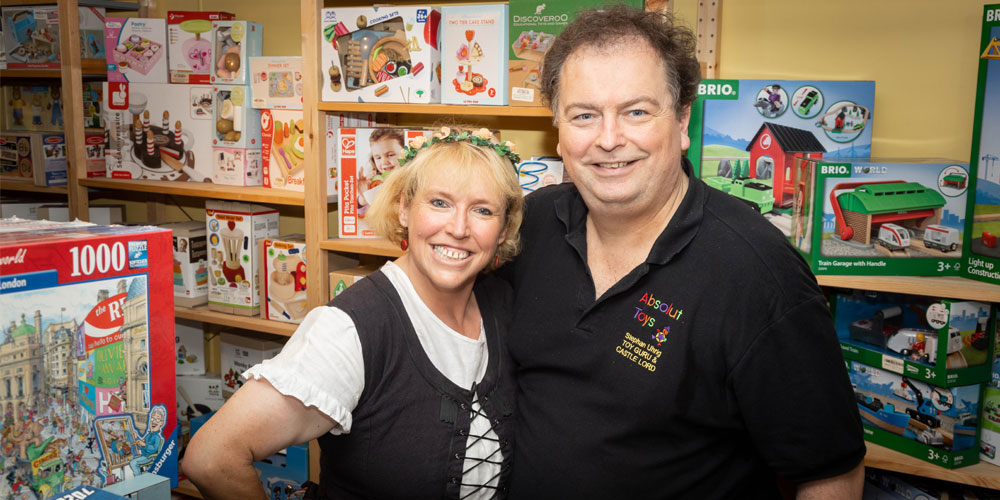 Celebrating 15 years in business is no mean feat and for independent Sunshine Coast toy store Absolut Toys, this milestone is something to be proud of.

Relocating to the region from Germany in 2006 to run Sunshine Castle at Bli Bli, Stephan Uhrig and Birte Benecke-Uhrig soon discovered the quality European children’s toys they so fondly grew up with were not as readily available for their then-six-month-old son.

“When it came to the big move, Stephan made sure some of his childhood toys had prioritised space in the shipping container when we moved here,” Ms Benecke-Uhrig says.

“He wanted our son to play and enjoy the toys that had been kept from his own childhood and eventually be handed down to future generations.”

Realising a gap in the market, Mr Uhrig began sourcing castle-themed toys to sell in Sunshine Castle’s gift shop and it soon became clear the family was going to specialise in selling quality toys at affordable prices.

“In 2010 the opportunity arose to lease a separate shop at the old fire station in Maroochydore and Absolut Toys came to life in its own brand-new home,” Ms Benecke-Uhrig says.

Absolut Toys began stocking a large selection of beautifully crafted wooden toys, educational toys and eco toy brands and Mr Uhrig, who is locally known as the toy guru, would make annual trips to the world’s biggest toy fair in Germany to ensure children had access to the best toys here.

“Those that had discovered Absolut Toys became fans and appreciated the vast range, fair pricing, personal service and advice that we were able to give them,” Mr Uhrig says.

Over the years, the local store has faced the global financial crisis, competition from larger convenience and chain stores, as well as the recent COVID pandemic, and despite all odds it remained a local institution.

Eventually the online world took off and the difficult decision was made to close the Maroochydore store.

“We got ready to move our toy shop back into our castle and early in 2018 Absolut Toys moved back into its womb, it’s kingdom and its heart space at the castle,” Ms Benecke-Uhrig says.

“Early 2020 – the world changed with COVID-19. When the castle, as a tourist attraction, had to shut its doors there was suddenly a new need. ‘Give me a puzzle and I will have a happy family in lockdown’ was the general consensus amongst the community.

“The phone, messenger and the Absolut Toys website were inundated with requests to buy puzzles, any puzzle.”

Ms Benecke-Uhrig says she is pleased to see a shift back to traditional toys and shopping local, and hopes this trend will continue into the Christmas season.

“While the future is unsure still, traditional, educational and quality toys are more in fashion again than ever,” she says.

Clubbing together to save lives
Shining light of hope