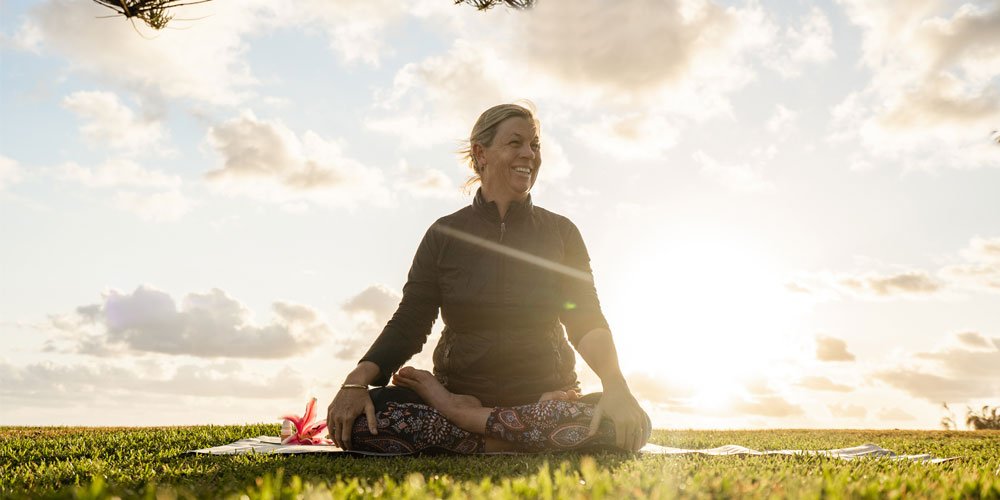 The sun rises above Caloundra and Jodie Kimberg breathes deeply, inhaling the crisp, salty air and the essence of the ocean beyond.

Mrs Kimberg is a high-flying international Qantas air crew member who now could not be more grounded.

Her slow-paced mornings as a yoga instructor are a far cry from her previous 24 years, which were spent jetting everywhere from Africa and New York to London, and her “second home’’ of Japan.

The mother of two was one of an estimated 90,000 Australians whose careers in aviation came to a screeching halt in March 2020.

She is also one of almost one million Aussies who were put out of work, or forced to diversify, in the wake of the COVID-19 pandemic.

After working more than two decades in the same industry, being forced to walk a new career path was daunting.

“I was stood down at that stage,” Mrs Kimberg recalls of that fateful March day in 2020.

“I do remember that day. They sent us out an email. I was just so shell-shocked.

“I recall a moment [before the pandemic]. I used to catch the airport bus to the terminal and I was sitting near some Virgin flight attendants, who at the time were worried about their jobs. I had this moment where I thought, I’m so lucky to work for Qantas. It’s so secure, it’s so stable. Then, lo and behold.”

The McKell Institute Australian Aviation and COVID-19 Analysis of support and impact, January 2021, reports that pre-pandemic, the aviation industry employed more than 40,000 direct employees across the two biggest airline groups.

Another 50,000 people were employed by small carriers or in the rest of the supply chain.

By mid-April 2020, an estimated 12,400 aircraft had been placed into storage and passenger revenues were forecast to be down 48 per cent, or $314 billion, on the previous year.

The major airline has come under fire in recent months for its unlawful sacking of 2000 employees.

The company is now also in discussions with the Fair Work Commission to terminate its enterprise deal with long-haul cabin crew. If successful, long-term employees could have their minimum pay cut by up to 37 per cent. It’s a controversial move in a bid for survival, but the issue is also causing further conflict for employees unsure of their future.

Mrs Kimberg’s return to the sky will be dependent on the return-to-work conditions.

“You think it will be over, but it just keeps coming,” she says of COVID impacts on the workforce.

“You get back up and then we keep getting these things thrown at us. Here we go again, and we’re in our third year.”

Mrs Kimberg reveals many in the industry have suffered from significant mental health issues after losing not only their incomes, but also their identities.

For Mrs Kimberg, having the opportunity to turn a passion into employment was her saving grace. In her role as a yoga instructor, she holds classes from Golden Beach Yoga Space, as well as sunrise sessions by the beach.

In addition, she has used her first-hand experience of living and working in Japan, and her linguistic skills, to take up part-time employment as a Japanese language teacher at a high school.

“The hardest part of all this is having to change my mindset… to totally reinvent yourself,” Mrs Kimberg says.

“I weave this into my yoga classes:  you are stronger than you think you are. It’s not until you are pushed that you understand that fully.

“We do that in yoga to practise for real life… ‘I am strong, I can do this’. It’s a lot about mindset.

“You think, life is not going my way, what am I going to do with my life?

“It’s been up and down with the change of pace. I miss travel so much.”

Earlier this month the government announced that after almost two years, the country’s borders would reopen to international arrivals. Fully vaccinated visa holders and tourists will be allowed into Australia from February 21. Arrivals will need to meet quarantine requirements for each individual state and territory, and arrival caps will remain in place.

The announcement has given Australians renewed hope that the industry in on the road to recovery. But in reality, the path forward is littered with obstacles. Staff and flight shortages remain, while countries abroad also have their own requirements, making outbound travel complicated in some cases.

“Our future remains to be seen,” Mrs Kimberg says.

“Some of my friends are back working. Sydney and Melbourne went back a couple of months ago.

“Brisbane has recalled everyone but there are no scheduled flights out of Brissy yet. We are still sitting at around 30 per cent capacity prior to COVID.”

Of course, the travel industry has also suffered a huge blow at a domestic level.

Here on the Sunshine Coast, travel agents were suddenly left without income as the bills piled up.

Award-winning businesswoman Zoe Sparks was one of the many who faced an  uncertain future. It was a case of diversify, or don’t survive.

For seven months she had no income. Determined to stay afloat, Ms Sparks set out to find and fill a gap within the market, and so, SunSHINE Boxes was born.

These beautiful gift hampers encompass the best produce and product the Sunshine Coast has to offer. She now ships the hampers Australia wide, and offers local delivery.

“Events are now starting to bounce back with a vengeance… I feel like I’ve got two full-time jobs.

“It’s a great problem to have.

“For a lot in our industry, for nine months they were still working full-time even though no one was travelling. The heart-breaking thing was giving everything back, the commission you’d earned in the six months prior.

“Most in our industry have earned virtually nothing in two years. Our industry will never be the same again.”

“A lot of people have been very kind and understood what has been going on behind the scenes for people in tourism and hospitality.

“It’s definitely about supporting local businesses. For a lot of those little suppliers, everything went so quiet.

“Understand, and be there for people – that’s always been my business model.”

The number of people indicating they expected to change jobs in the next 12 months also rose in November, from 636,000 people in August 2021 (4.9 per cent of employed people) to 705,000 people in November 2021 (5.3 per cent). This quarterly increase of around 70,000 people was greater than the usual seasonal increase, which averaged around 24,000 over the previous five August-November periods.

Undoubtedly, the tourism industry has suffered greatly because of COVID.

It’s a fact that has not gone unnoticed by Sunshine Coast career consultant Kate Langford. Ms Langford and her team work alongside people who find themselves at a career crossroads – whether that be by choice or not – to grow and redefine their employment options and success.

Interestingly, she says the effects of COVID on forced diversification have been wide and varied across a number of industries, not only tourism and hospitality.

Whether forced to diversify or reassessing their career goals, there has been a growing trend towards unearthing a passion and creating opportunities from that, Ms Langford says.

“It’s the great awakening. People are searching for fulfilment.”

Of course, it doesn’t come easy, particularly for someone who may have worked consistently in one industry for a long period of time.

Ms Langford says confidence can be one of the biggest obstacles.

“A lot of people think they know who they are because of their job, that their job shapes who they are. All of a sudden that’s stripped right back to the bare bones; they think, can I do anything else? Who would hire me?

“It’s about mindset, self-worth and confidence. That’s what we tap into. Everyone has transferable skills. It’s about stopping and saying, ‘what do people come to me for? What’s my genius zone? What comes easy to me?’

“If you’re at a barbecue, what sort of conversation would get you lit up? It’s almost about throwing your resume out and tapping back into what your gut feels.”

Do you know how to save a life?
New home for charity