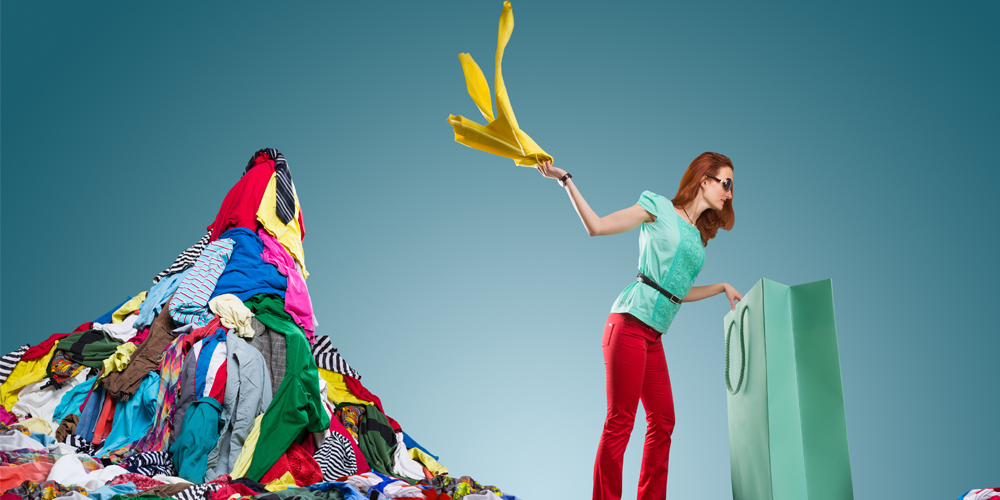 When we think of pollution, we envision black smoke plumes billowing from chimney stacks, beaches littered with cigarette butts and discarded plastics, and oil slicks sitting atop pristine oceans.

We don’t think about the clothes we are wearing – but we should.

After all, the fashion industry is the world’s second most polluting industry. It involves farming, harvesting, manufacturing, shipping and ultimately disposal. Every step has an impact on the environment.

On top of this, the evolution of seasonal fashion cycles into weekly must-have crazes on the ever-turning fast fashion trend mill has seen low-cost, low-quality clothing becoming the norm. And it is being used at a rapid rate.

Australians spend $5 billion on fashion each year and more than half a million tonnes of textiles and leather end up in landfill in the same period of time.

We are second only to North Americans when it comes to demand for textiles, with the average Australian buying 27 kilograms worth of textiles every year, just 10 kilograms behind Americans.

Staggering Roy Morgan Research has found 1.7 million Aussies are buying at least one pair of jeans in any four-week period.

It is a strange concept for former Chaser presenter Craig Reucassel, who presented the ABC’s War on Waste mini-series.

Reucassel was in his comfort zone when looking at farming and household waste and the recycling habits of both households and businesses, but when he came to the feature on fashion, he was clearly in foreign territory.

Talking to four young teenagers with a passion for fashion and daily shopping excursions, Reucassel was quickly called out for wearing holey Converse sneakers, which he admitted he bought two years ago.

“The whole point of me doing (the show) is that I wasn’t an expert. I wanted to show people that you don’t have to be a high-profile person to make quite a big impact and I was impressed that some of the everyday Australians we interacted with made more of a difference than we expected,” he tells My Weekly Preview.

“Not being someone really in tune with fashion, I found the speed and turnover is quite phenomenal. What it has done is made clothes a lot cheaper, sometimes less than a cup of coffee, so people can buy them all the time. This means there is less value associated with them and they become a disposable item.”

Reucassel says he was shocked to find so many people buy clothes and don’t even wear them before eventually taking them to op shops with the original tags still attached.

To create a visual representation of the volume of clothes thrown away or donated to charity, the War on Waste crew set about building a mountain of clothes in Sydney’s bustling Martin Place.

“Initially we wanted to show how many clothes were thrown away in an hour, but we quickly learned that would literally fill Martin Place, it was quite surprising how much it was. So we ended up with a mountain that showed how much was thrown away in just 10 minutes, which is 6000 kilograms worth.”

“I think people were surprised by the size of it. People were starting to think about their own purchases. There was a girl standing there with an H&M bag thinking, ‘I’m part of this’.”

While Australia was a world leader in recycling and pioneered paper recycling programs in the 1960s, Reucassel says fast fashion is proving to be harder to deal with.

“There are some early stages of processes through which you can recycle clothes, but it’s certainly not at the stage where it can deal with the quantities that we are throwing out,” he says.

“We need more awareness and breakthroughs in technology, which will come when more people actively start looking for and demanding that option.”

Australia has a culture of donating goods to charity, which is a win/win situation when you are diverting clothing from landfill and helping not-for-profit organisations to fund their much-needed projects.

But some items can’t be used by charities, despite your good intentions. If you buy a new T-shirt for $3, for example, it’s not going to stand the test of time.

Bloomhill Cancer Care has donation bins at seven locations on the Coast and collects an average of 12 bin loads each week.

Of the clothes donated, 50 per cent go into the Coast’s op shops, 40 per cent is ‘white bagged’ and sent overseas to be reused by people in Third World countries. The remaining 10 per cent is destined for landfill.

More than 200 volunteers work at the Bloomhill stores and distribution centre and Bloomhill op shop coordinator Nicole Croft says about half of those would be sorting clothing full time.

“Sorting of clothes is extremely time consuming, but it is done to ensure quality control,” Croft says.

“The distribution centre controls the majority of donations, although all stores have a sorting area if donations are made direct. On average, the DC allocates 32 hours every week sorting through clothes – this is based on several shifts with a minimum of two volunteers per shift. Each op shop probably spends at least two to three hours sorting as well.”

The investment in time is definitely worth it for Bloomhill, with the op shops generating more than 80 per cent of the organisation’s funds, which provide care for people living with cancer on the Sunshine Coast.

“We always ask for clean good quality items. A good rule of thumb is if it is something you wouldn’t give to a friend, don’t pass it on to an op shop,” Croft says.

“I love the fact that if one million women bought their next item of clothing secondhand instead of new, we would save six million kilograms of carbon pollution from entering the atmosphere.

That’s a pretty compelling case for buying from op shops,” she says.

A Sunshine Coast Council spokesperson says a 2016/17 waste categorisation audit found 3.1 per cent of textiles and rags made up the commercial waste stream and 3.2 per cent of the domestic waste stream.

“Clothing waste does not present any unique landfill management problems,” the spokesperson says.

“Council supports and promotes waste minimisation. Reuse through donations and/or sharing is a great way to delay landfill disposal, but really to avoid waste disposal, buy only what you need.”

Based on the current population, the council’s landfill facilities are sufficient to accommodate the region’s needs to 2050.

Reucassel says with the majority of the textile industries operating overseas, consumers are so far removed from the production process that they see a $10 blouse as a bargain and never consider the water-intensive process of cotton farming, the chemicals used to dye the fabric, and then the fossil fuels used to transport the blouse from its country of manufacture over to Australia.

The War on Waste looks at the Sustainable Apparel Coalition, which has developed the Higg Index, a self-assessment tool for clothing brands, retailers and facilities of all sizes, to measure their environmental, social, and labour impacts and identify areas for sustainability improvement.

Reucassel says it will be easier for consumers to make informed decisions about the clothing they buy if something like the Higg Index can be universally applied, much like the labelling that is required on foods in supermarkets.

“It would be a real step forward to be able to visually see the impact this item of clothing has made and will also hold clothing manufacturers more accountable for their processes. This is something I am going to look into for the follow-up show, which we are working on right now and will be released later this year,” he says.

While changes on a national and even international level will take some time, Reucassel says the ultimate power to make change lies with consumers.

“In the end, the absolute power that you have is to buy less. Whether you spend more money to buy high-quality items that last longer, or choose to use one jacket for an entire winter season instead of buying five,” he says.

“You need to slow down your fashion despite every one of these major companies doing their best to speed it up.”

FAST FACTS
• Australians spend $5 billion on fast fashion every year
• Half a million tonnes of textiles and leather end up in landfill each year
• 6000 kilograms of recycled clothes are thrown out every 10 minutes. In one year, that’s enough clothes to fill the MCG twice
• One cotton T-shirt takes 2700 litres of water to produce, that’s enough drinking water for one person for three years
• Clothing made from polyester, which is essentially a plastic, takes up to 200 years to breakdown in landfill
• A natural fibre like cotton or wool can biodegrade and compost, but landfill doesn’t provide the right conditions for this to happen.

Continue Reading
You may also like...
Related Topics: war on waste