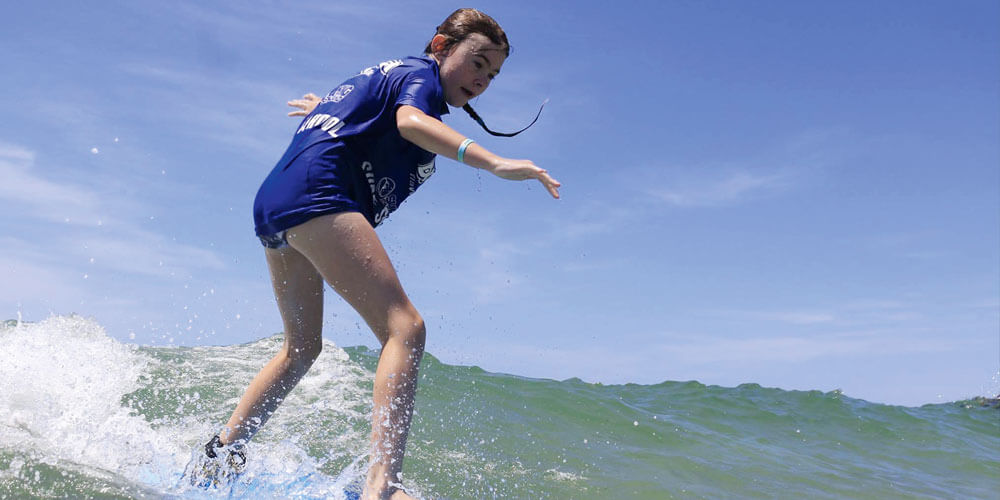 The SalTy Souls charity is calling for donations for future programs

The legacy of a Coast man who is described by his family as the “saltiest of souls” is living on in the smiles of the young people who are experiencing the thrill of surfing.

Tyler Kennedy tragically died while on holiday in Bali last year and after considering a number of ways in which his memory could be honoured, Mr Kennedy’s family established a surf school for underprivileged Sunshine Coast kids and teens under the name SalTy Souls Legacy.

Mr Kennedy’s older sister Tamara Smith says the six-week Standing Tall program is aimed at getting kids aged between five and 18 out into the water to surf and heal both mentally and physically through the power of the ocean.

Ms Smith says she knew they were on the right track when the 16 available positions filled up just hours after the six-week program was announced. There is now a waiting list for the first program for 2019.

The wider community has shown its support for the program, with local surf school coaches donating their time to teach the students. Around 95 surf boards, 30 boogie boards and boxes of rashies, wetsuits and sunscreen were donated to the charity by Coast residents during a collection day in August.

These boards have been refinished by The Factory Surfboards in Caloundra and given to the program participants to keep, so they can continue to enjoy the surf long after the program has finished.

“Every board that is donated is given a registered number with a link to a message for the kids, so they can see the depth of the amount of love that has gone in to giving them this opportunity,” Ms Smith says.

“Tyler learned to surf on a pre-loved surfboard and he saved every cent to get his first custom board from The Factory.

“As a grom, he used to go there and watch them make boards. It’s all connected in this wonderful way and [SalTy Souls] has created purpose for us as well.

“It sounds crazy, but it’s like he’s left us a project and it really has made it all worthwhile. Our little motto is, ‘his soul, our hearts’ and I feel like it’s steered by him and we are getting guided by him on what to do.”

Ms Smith says she is proud to see how the youngsters are progressing through the program and working through their individual challenges in the process.

A number of participants were actually afraid of the surf at the start of the program and they are now standing tall on a board with the rest of the group.

It costs $250 to put one young person through the program and SalTy Souls is seeking financial donations or business sponsorships to help as many children as possible.

As a new charity, they are also seeking volunteers to help with IT support and admin duties as well as photographers to capture the magical moments experienced by the children when they are out on the water.

SalTy Souls Legacy will have another collection day at Mudjimba Beach Park on December 8 from 10.30am to 12.30pm. The charity is seeking donations of secondhand foam boards, fibreglass boards, rash vests, wetsuits, sunscreen and leg ropes.

Ms Smith says any excess donations will be passed on to families in need or other Coast organisations that host surfing opportunities for young people with disabilities or who are financially disadvantaged.

To find out more about how you can help, visit saltysoulslegacy.org.

The future’s bright with solar
Food for life