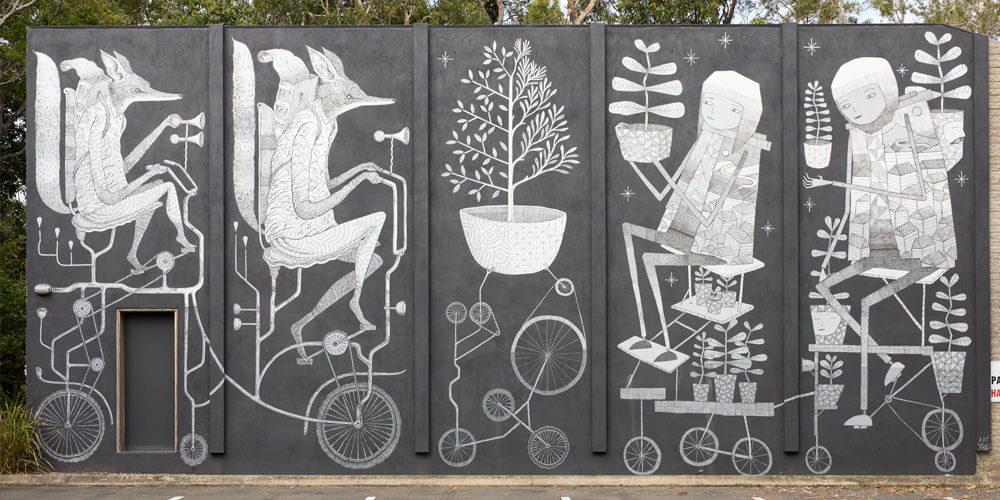 There’s a landmark you can’t miss when you visit the Sunshine Coast University Hospital. It’s a rust-coloured steel sculpture of a boy doing a handstand, six metres tall and bursting with youthful exuberance. The piece, called iDIDIT! is by Maleny artist Russell Anderson. While the response to the piece was initially positive when it was unveiled last July, controversy arose when a TV news report revealed the piece cost $220,000.

Mr Anderson copped a barrage of criticism on social media over the ‘waste of taxpayers money’, despite the fact it was paid for privately, by the developer Stockland. Mr Anderson, who has worked as a public artist for more than 20 years, was devastated. He’d poured his heart and soul and a year of his life into the project, and most of the money went towards materials and labour to cut and weld the steel. He tells My Weekly Preview that if he tallied the hours he put into it, his wage would have been less than $10 an hour to create what has been hailed far and wide as a brilliant piece of public art.

The backlash was unfair, but it did raise the question: what is the value of public art and is the money justified? Should the Sunshine Coast Council be investing our hard-earned cash in public art we may or may not like and what responsibility do developers have to include public art in the estates burgeoning across the Coast?

According to Mr Anderson, the value of public art can’t be underestimated and the general public doesn’t realise how much something like a simple footpath costs, let alone a hand-crafted, eight-tonne sculpture with thousands of interconnecting pieces of Australian steel.

“As far as artwork goes, $220,000 is not even up there at all,” he says. “I could see why people thought it was a lot of money but that’s because they have no experience of what it costs to make something like that. There are so many costs that people have no idea about that eclipse what I’m doing.

“Although that one was paid for privately, a lot of my work is paid for by government,” he says. “I didn’t engage with the Facebook critics because I didn’t want to be drawn into the argument that art is not justified if it’s paid for with public money.

“Public art is about us thinking differently about the world,” he says. “Proportionally in a project, in the scope of an entire budget for a precinct, a sculpture like that is a tiny percentage that might become the thing that defines the entire site, so it gets a greater benefit than the financial cost.

“With that one at the hospital, the idea is to give you hope and something to enrich you and to think positively about your experience. You don’t necessarily get that by a hospital’s architecture, you get it by a thing that’s playful. I got a random email from a person who searched me out. Their partner got very sick and she said that the sculpture actually gave them the power to want to get better and make it so they could walk to the sculpture and touch it.

“As a general rule, the response to my work is fairly positive but you do have to have a thick skin because not everyone gets art and they think there should be a carpark there. The boy has a bit of a serious message underneath it all about rehabilitation, but it’s meant to be fun and joyous. That’s my thing about public art – I try to lighten things up a bit. I’m not trying to offend people and I’m not political in any way.”

When the call for submissions was made, one online critic responded: “I always wondered whether it’s the council’s job to run arts, festivals and spend massive amounts of money attracting new events. Their core work is surely to maintain assets and services, which are essential, such as roads, waste, planning sustainable development, etc. I don’t the think arts are within the council’s remit and it particularly pis*es me off when I see part of my rates being spent in areas I don’t think I ever agreed to.”

It’s a sentiment shared by others and one Julie Hauritz is familiar with. As the Sunshine Coast Council’s public arts officer, she spends a lot of time dispelling myths about public art and its cost-benefit ratio. She’s responsible for all public art projects the council delivers and also manages community public art projects, such as the iDIDIT! sculpture. In her opinion, it’s not a matter of too much money being spent on public art, but not enough.

“From council’s perspective, we have a very small percentage of money put towards public art outcomes. What we spend is way less than one per cent of the budget, and that’s just in capital works budgets, that’s not including waste and road services. It’s a very small amount and quite sadly, when there’s budget cuts, public arts is one of the things that gets cut.”

So, what is the value of public art?

“Public art is a really key element to create a sense of connection and meaning making to the community and visitors,” says Ms Hauritz. “How that works is you have a dialogue with a piece of artwork – you question what it is, what it means and how it makes you feel. Those things embedded in that experience create deep memories. Usually people have a really emotional response to public art – it can be good or bad. There are so many layers to the benefits. It’s a place-making tool, it really builds what the cultural identity is to that region and creates a sense of distinction.

“It’s really about making us unique. We don’t want to look like Logan Central or the backstreets of the Gold Coast – those are the places that don’t have cultural activities and outcomes in the form of public art.

“It’s about creating a distinctive character for the Sunshine Coast and it’s a real driver for the economy. There’s so much it will leverage, from construction companies and engineers to fabricators and people that produce the materials that create the artworks. Also, a lot of technology these days is used in public art, which is in keeping with the push for smart cities.”

While the council’s investment in public art is comparatively small, the sky’s the limit when it comes to private investment. Developers are required to include a public art strategy as part of their development application, which can include things like unique seating designs or lighting elements.

“We are in the process of educating the developers,” says Ms Hauritz. “A lot would like to just put in a flashing light. They’re starting to understand more now and certainly with Stockland, we all learnt a lot with iDIDIT!. It was a really iconic, memorable moment. It provided an opportunity for the developer to see the value of what art can bring. It’s a photo opportunity for visitors as well as a point of interest for people in hospital. The email Russell received from the woman who had a sick husband – that’s exactly what we’d hope public art could provide. A sense of hope and connection to a personal experience. They were uplifted by it.”

Mark McMahon, senior development manager at Stockland, said the $220,000 was “absolutely” money well spent and that iDIDIT! has become a popular landmark for locals and visitors alike.

“The positive response to this artwork has been fantastic,” Mr McMahon says. “Public artwork, such as the iDIDIT! sculpture, are incredibly valuable assets as they reflect the essence of the community and become part of the region’s identity. These artworks represent a commitment to creative pursuits and the beautification of streetscapes while serving as a unique attraction for visitors.”

Ultimately, while not everyone may appreciate public art, the many pieces of public art dotted across the Sunshine Coast bring joy to many and importantly, no one is excluded.

“Public art is not confined to a gallery,” says Ms Hauritz. “It breaks those white wall barriers of a gallery, it’s open 24/7, it’s usually free, people can engage in it however they want and they don’t feel inhibited.

“The stats from the Australian Council for the Arts show more people engage in cultural activities than sport. A lot of money is spent on sports so it has the upstage in the media. It’s all about the investment.

“The incredible power of the arts is we’re developing all this with a minus budget. There needs to be a massive cultural shift and it may not happen in our lifetime.” 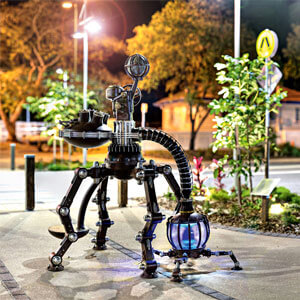 The average cost of public art pieces ranges between $3500 and $200,000, depending on the size and complexity of the work.

Continue Reading
You may also like...
Related Topics: Art, news