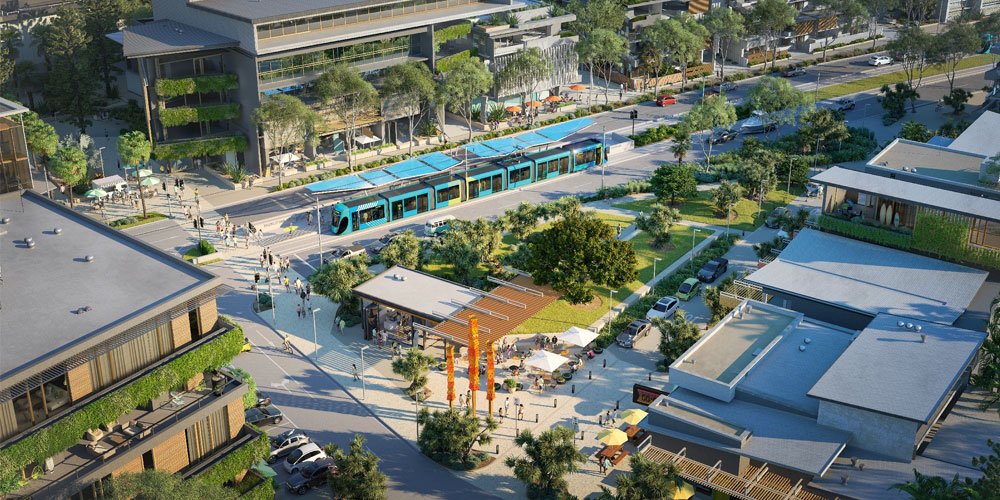 Sunshine Coast Council defines mass transit as “a form of public transport that concentrates on moving large numbers of people over a fixed route or network”.

The council has been building a case for mass transit since councillor Vivien Griffin raised it in the Bob Abbot-led council of 2011, before Noosa’s de-amalgamation.

Planning to date involves a 22-kilometre mass transit corridor between Maroochydore and Caloundra and while various transport options have been put forward, light rail has been named as the preferred option with a bus rapid transit system runner-up.

The mass transit corridor is distinct from the CAMCOS (Caboolture to Maroochydore Corridor Study) corridor rail link between Beerwah and Maroochydore, which would involve a new rail line from Caloundra South to Maroochydore.

A draft copy of a Preliminary Business Case report prepared by PricewaterhouseCoopers (PwC) suggests the mass transit corridor would be built in two stages, the first being a 13-kilometre stretch from Maroochydore to the Sunshine Coast University Hospital precinct with 16 stations, and the second running nine kilometres from there to Caloundra with nine stations.

A journey on the 13-kilometre first stage would take about 30 minutes by light rail, in a vehicle about 45 metres long, capable of carrying 80 people seated or 220 standing, and capable of travelling at up to 80 kilometres per hour.

The report says mass transit is needed to alleviate the increased traffic that will come with an expected population increase of about 200,000 to 518,000 by 2041.

Mayor Mark Jamieson says an efficient, accessible public transport system is necessary if the Sunshine Coast is to remain a beautiful, liveable location as the population grows.

“Simply continuing to build roads which only encourages people to use a private vehicle is not an option for our Sunshine Coast,” Mayor Jamieson says in a statement released this month.

However, the mass transit project has begun to attract criticism, with some regarding it as a ploy to justify increased population density in the coastal strip.

Buddina’s Tracey Goodwin-McDonald was shocked when she began reading reports that talk about increasing the number of dwellings in the corridor from 11,000 in 2016 to more than 50,000 by 2041– a five-fold increase.

She and a friend, Kate Harvey, learned about the mass transit project during a meeting with a council staff member who was unable to answer their questions about building height and densities in their area because the mass transit corridor was yet to be finalised.

“We said, ‘What does mass transit have to do with densification’?”  Ms Godwin-McDonald says.

Ms Goodwin-McDonald says increasing the densification of the area had never been discussed in two limited rounds of public consultation held during preparation of the various reports so far.

“As we spoke to people, we found that people were aware of the light rail, but they didn’t know about the densification,” she says.

Certainly, the PwC report and a Strategic Business Case presented to the council last year contain various mentions of urban renewal and the benefits of containing much of the expected population growth in the mass transit corridor.

The PwC report says mass transit must act as “a catalyst that will engage developers and the broader community in an urban transformation process that results in a significant proportion of new quality housing choices being located within the mass transit corridor.”

Ms Goodwin-McDonald, Ms Harvey and a retired engineer are now the nucleus of the Mass Transit Action group, or Mtag, which is against high-rise along the coastal strip and has been calling for greater public consultation before the project proceeds any further.

In a statement, Mr Jamieson has denied plans for high-rise building in the mass transit corridor, but did not address questions of increased density.

“Our council has never pushed for or advocated for a ‘wall of high rise from Maroochydore to Caloundra’ and these claims are both baseless and questionable in their intent.”

But Mr Jamieson says that the existing road network will choke itself if something is not done and maintains that “a mass transit network – can be delivered in a way that does not compromise the liveability of our coastal communities”.

A town planner, who did not want to be named, says the council’s mass transit project was undoubtedly based on the assumption that population density would be increased in the corridor.

He says there is a trend for using mass transit and high density living because technologies such as light rail were only viable if enough people lived within walking distance – but he doubts the required urban densification would agree with the coastal lifestyle that drew most people to the area.

Councillor Joe Natoli and Member for Kawana Jarrod Bleijie have also begun questioning the motives of the mass transit project.

“This isn’t about public transport, this is about building high rise along the beach,” Mr Bleijie said at a media conference. 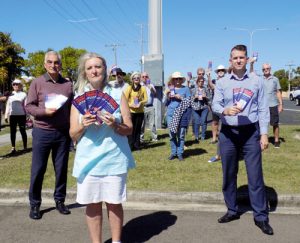 Mr Natoli describes the mass transit project in its current form as “the greatest threat that I’ve see to our lifestyle on the Sunshine Coast”.

Mr Natoli moved a motion at the August 20 council meeting that the council carry out public consultation before proceeding further with the project. The council eventually agreed seven-to-three to do so after more than an hour of debate.

Mr Natoli said the council did not appear to have considered other options, such as catering for population growth along the CAMCOS corridor, which the state government already owns.

“Why aren’t we walking about these other options?” Mr Natoli asked at the meeting. “Why is it that there’s only one option on the table? The community has had no say in this… Do we want to make 23,000 people in this corridor the sacrificial lambs…” he told the meeting.

Mr Jamieson did not support the motion for consultation, saying he would take direction from a meeting on August 27.

He said the challenge is to plan for the future, not today, and the council can’t afford a stop-start approach.

“Would you like a dollar for every time someone said, ‘why don’t you get the infrastructure in before you build the houses?’ he told the meeting. “Well, here we are at a point in time trying to do exactly that, even though – and it’s worth making the point – public transport is not the responsibility of local government. We’re there because nobody else is doing anything about it.”

Cr Vivien Griffin raises the possibility of light rail on the Sunshine Coast.

A Line in the Sand, a pre-feasibility and rapid economic appraisal looked at six possible corridors for mass transit.

A Strategic Business Case report was presented to the council in July 2019.

A Preliminary Business Case has been prepared with a view to moving to preparation of a Detailed Business Case, a $15-million study jointly funded by the Sunshine Coast Council and the state government. However, prior to accepting the PBC, the council has voted to have more community consultation.