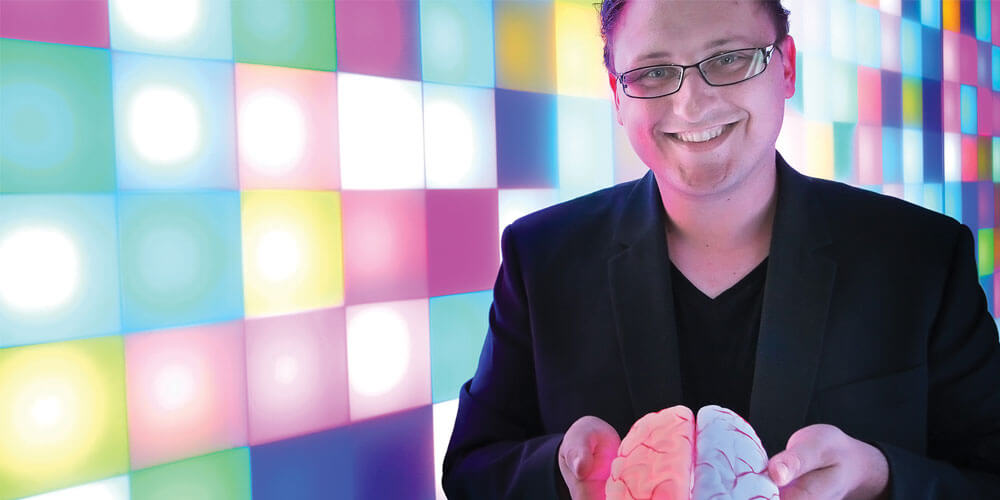 Mic Black will never forget the moment he decided to follow  his passion for combining art with technology and invention and create a new, daring life. It was the day his daughter came home from school in tears.

“My daughter went to a careers day and was asked, ‘What are you going to be when you grow up?’. I like to call that, ‘What do you want to be when you give up?’. She said she wanted to be a professional cellist or an artist.

“Without hesitation, the careers guidance counsellor said, ‘Yeah, but what are you going to do for money?’. She came home really upset. It broke her heart.

“When she told me, I was furious. I was pacing around the kitchen, fuming. I was saying, ‘Just because [the guidance counsellor] may have given up on her dreams and ambition, it doesn’t mean you have to’.

“We have a large mirror in the dining room and I literally looked straight into the mirror and thought, ‘Well, what example are you?’. I was working in a job, ignoring my passions.”

He decided it was time to prove he could make a life filled with creativity and set an example for his daughter Jazmyn, now 16.

“That was the moment of change for me,” he says. “The next moment started everything, and that was a conversation around the table about how do we make art more accessible to everyone?”

This question led him to develop Pixel Mosaic, a world-first interactive digital art project that reached thousands of students from 74 schools to express themselves in colour using Arduino technology.

He now runs a boutique research and development service, Mic’s Lab, travelling the world working on high-impact social and economic projects and guest lecturing in universities.

A prolific inventor and early-stage investor in novel technologies, he believes in open sharing and collaboration to show others it’s not really hard to do really hard things.

“I’m a professional maker. When you’re pushing the boundaries of what people think is possible, the bar is permanently raised. Once people realise something is possible, they build on that to make the next impossible thing. Sharing that experience with others is what drives me.”

A local project he’s currently involved with is the Noosa Hydro project, one of a slew of Sunshine Coast projects that won awards at GovHack in September, where more than 3000 participants across Australia data hacked over a 46-hour weekend.

The Noosa Hydro project won the Sunshine Coast Sustainability Challenge and will progress to the national awards in Canberra on November 10.

“It’s a project initiated by local resident genius Chris Drake,” Mr Black says. “Using government data, he discovered a unique coastal current just off the Peregian Beach coastline. It harnesses these ocean currents to give us renewable energy for the entire region.

“What’s really unique about this is it’s a brand-new design – the way the propellers work are not marine life death traps. A small installation around a kilometre long could sustainably and reliably power all of Noosa and four of those may even power the whole Sunshine Coast.

“I’ve worked with Chris on a few projects before. This time I built a demonstration model for the project at the Sunshine Coast Maker Space in Warana. We worked through the night doing the math and laser cutting  a model until it was able to describe the brilliance of Chris’ original design and then extend on it. “

“It’s the equivalent of having a wind farm with 2000 kilometre-per-hour winds all year round. It’s so efficient and constant, unlike solar or wind.”

Mr Black and Mr Drake have presented the concept to the Sunshine Coast and Noosa councils and are now working on defining a feasibility study.

“The current is so intense and it comes right near our shoreline,” Mr Black says. “Not only is it a unique technology, it’s also using something we are already blessed with in this beautiful place where we live.”

Mr Black also won the Spirit of GovHack Award. This was awarded for his willingness to help multiple teams despite them being competitors, freely sharing his knowledge, and for taking along a modified 3D printer and printing pancakes for the participants  – a duck pancake with Elvis hair was the most popular.

Mr Black says he can’t believe this world of ideas and invention is now his day job, and he’s paid to travel the world working with great creative minds. This year alone, he’s built full-size self-driving cars, automated a farm, set up multiple makerspaces and worked with organisations like the Chelsea Football Club in London and the Sydney Conservatorium of Music and the Australian Film Television and Radio Service.

“I’m known for doing cutting-edge things with technology, then sharing that knowledge freely.

“This year we taught 60 farmers how to build their own Internet of Things devices to automate their farms, which was featured on Landline. It was such a real and valuable moment to re-equip these ingenious farmers with new tools and freedoms.”

Mr Black is often told his ideas are ‘pie in the sky’ so to prove that’s not an obstacle, he’s planning to launch an actual meat pie into near space, just to prove it can be done.

“We’re going for a world record for the highest pie in the sky,” he says. “I’m hoping it will meet up with a flying saucer, which is a projective tomato sauce canon that will shoot tomato sauce onto the pie.

“If you were to tell me back in 2014 this is what my normal life was going to be like and  I was going to meet all these amazing people and have the ability to collaborate on out-of-this-world ridiculous projects, I would not have believed you, and neither would my daughter.