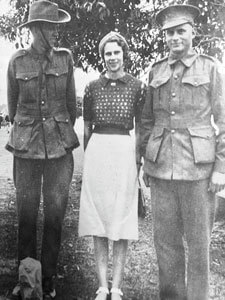 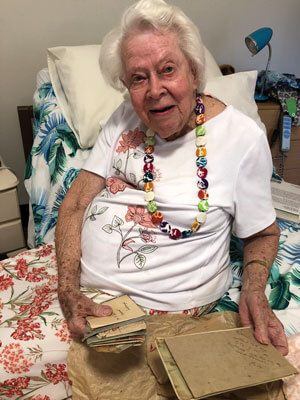 Mary Schulz at the War Veterans Home in Caloundra where she now lives.

The winter of 1942 was unusually  wet, but on cold nights, soldiers stationed around Caloundra were warmed by local hospitality.

Among the volunteers who served them tea with a smile was young Mary Schulz, nee Tutt, now aged “99 and three quarters”, who was living with her parents on the family’s poultry farm at Landsborough.

Her brothers Stan, Nigel and Charlie had joined the army soon after war was declared in 1939. Stan later became well known as the Sunshine Coast historian and author of seven books about the region’s heritage. He died in 2011, aged 97.

Mrs Schulz still has plenty of stories to tell about those years, as well as photo albums carefully noting dates, places and people.

Caloundra had become a key defensive position along the beaches. Young men and women arrived to operate the radar stations or probe the night sky with searchlights from the forts on Bribie Island.

The region was also a staging camp and training centre for troops being posted to South-East Asia after the fall of Singapore in February 1942. In May, Landsborough representatives of Red Cross, the state school, tennis club and the town’s three churches formed a group to look after entertainment for the troops and to raise funds.

It was decided to hold dances and social evenings in the hall every Friday night. On Sunday nights during that wet winter of 1942, the supper room under the Landsborough Memorial Hall would be crowded with soldiers from the 7th Division.

Padre Hartley called them bunfights. Outside, Granddaddy Dayman, as everyone knew him, would stoke up a roaring fire over which he boiled two four-gallon kerosene tins of water at a time, to brew tea and cocoa.

There was no electricity and with butter, sugar and tea rationed, the good padre would go around the district seeking milk from the house cows to make butter, and eggs for sandwiches and cakes.

The Tutt family had 2000 chickens and a cow, and with three of their own sons away in New Guinea, gladly shared eggs and the butter they had churned.

Bill Spence and Fred Bell of 129 Australian General Company delivering the army camp’s food scraps to the Tutts’ chickens. Not far from their home, on the old Landsborough-Beerwah Road, the 129 General Transport Company would send out its “hygiene truck” each day with the camp’s food scraps to help feed the chickens.

The troops left for active service in New Guinea. Many never came home. “The main road was so busy with convoys of army trucks, carriers and tanks,” Mrs Schulz recalls.

She and her friend Jess Duncan agreed to join the Methodist minister and his wife on Monday nights volunteering at the P&M (Presbyterian and Methodist) Hut in Caloundra.

It was at the house of the Verney family, opposite the Caloundra primary school in Queen Street, which in 1942 was taken over by the military forces to use as the headquarters for the 9th Division and the 61st and 25th battalions. They were destined to become the first to defeat the enemy on land after they arrived at Milne Bay.

Many of the local children had left the area when it became a war training zone and those who remained attended school in the Scout hut.

The volunteers weren’t allowed past the lighthouse to get to Queen Street. Lighthouse Hill was strictly out of bounds. “We used to drive past King’s boarding house and up the hill and turn left and proceed up Queen Street until we got to the first military guards,” Mrs Schulz  says.

“There we had to show our passes and then we drove slowly until we reached the second lot of guards. When one unit moved out and a new unit moved in, an officer came to the P&M Hut for us to sign a new pass.”

She enjoyed those evenings serving hot drinks of tea and cocoa and one scone and a small cake for sixpence to the soldiers. “We also made up numbers of boys to play Chinese checkers and table tennis and found someone to play the piano for a sing-song.”

Hot water for tea was boiled up on an old wood stove and the washing up was done in a big dish, which had to be carried outside and emptied. “I remember one dark night I was in a hurry and I whisked out on the little back verandah and threw the dish full of washing up water out and drenched two soldiers who were passing by,” she says.

At a Victory Ball in 2005, Mary was recognised for her wartime voluntary efforts by the Queensland Governor. 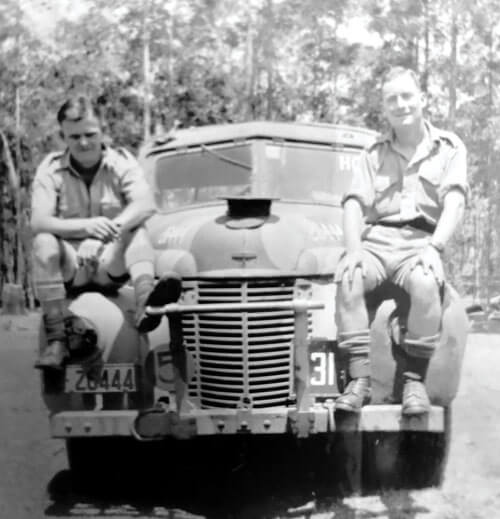 A new view of disability
Banding together for Bloomhill