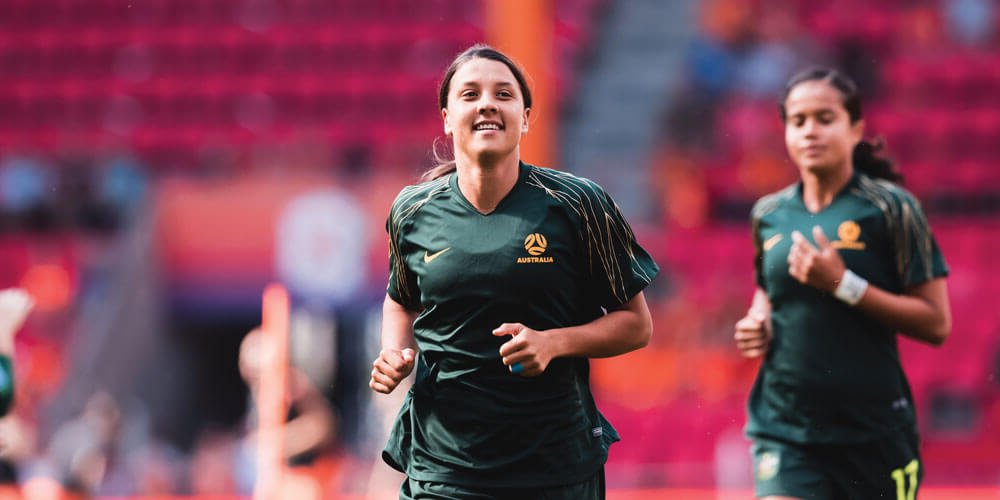 As the FIFA Women’s World Cup reaches fever pitch in France, Matildas’ skipper Sam Kerr is boldly embracing her role as the poster girl for women’s sport in Australia.

Ms Kerr’s celebratory back flip is fast becoming the stuff of legend and her face is all over Nike Australia branding campaigns as the Matildas receive more media coverage than ever before.

Even though Ms Kerr has established herself as one of the best strikers in the world, she acknowledges there is still a long way to go before parity is reached on any level for women in sport.

On the surface, advancement of elite female sport in Australia has accelerated since the milestone year of 2017. This was the year Ms Kerr was listed as the number one sports performer on the Fox50, the  AFLW debuted, and the Jillaroos continued their dominant run, winning the Australian-hosted Women’s Rugby League World Cup.

The following year, Australia’s female cricketers triumphed on the international scene while the men languished with ‘sandpapergate’ and rugby league launched NRLW with a short but powerful season, satiating a growing call for greater opportunities for women in the code.

Speaking to My Weekly Preview while training in the Netherlands for the Cup, Ms Kerr says support has grown exponentially for women’s soccer since she first laced up her boots to wear the green and gold.

“Australia has got behind us and there has been a lot more publicity around the team and I think that’s well earned. The girls have had a huge part to play in that. The standards of the W-League have certainly lifted and the interest in the team from the last World Cup to now is day and night,” she says.

“With the good comes the bad. We’ve had a positive response from the country and everybody is behind us and loves the way we play. Obviously with that comes the pressure to have to perform. The year that everyone got behind us, we had so many good results and now that is what everyone expects of us.

“We love that, we love that we have high expectations, but it has been new for us to have that pressure to win and not disappoint everyone.”

Growing up in an “AFL family,” Ms Kerr played in predominantly male teams and says while she always felt welcome, it was the lack of future opportunity which led her to soccer at the age of 12.

Much has changed on the field since then, with Ms Kerr becoming arguably the best player in Australia. She splits her time between the Perth Glory, the Matildas and her US club side Sky Blue FC, where she became the National Women’s Soccer League’s record all-time goal scorer and the first player in its history to score four times in one game, en route to claiming the competition’s 2017 Golden Boot and MVP Award.

While she humbly acknowledges these accolades, she says there is still much to be done to achieve equality, from broadcast and media coverage to pay. In the 2016/17 season, Socceroos star Tim Cahill netted a cool $3.5 million to play for Melbourne City while the following year, the W-League had a total salary cap of $2.2 million to split across nine clubs and 181 players.

These types of figures are not unique to Australia. The ABC reported teams at the 2019 Women’s World Cup will be fighting for just 7.5 per cent of the purse handed out at the 2018 Men’s World Cup in Russia.

The disparity means even if the Matildas win the tournament this year, the team will win $5.74 million, half of the $11.47 million the Socceroos earned last year when they were knocked out at the group stage level.

With the Women’s World Cup final selling out in just half an hour, Professional Footballers Australia has asked for an immediate doubling of total prize money from $43 million to $82 million. When you look at the $575 million prize pool given to men’s teams in Russia just last year, it doesn’t seem like a huge ask.

This is a pay gorge, not a gap, and this is even more apparent in the AFLW and NRLW, with female players still working full-time jobs to supplement the small amount they receive for their efforts on the field. Ms Kerr says the issue is something all female athletes are fighting to progress.

“You can’t just go from zero to 100 [on equality]. I think all us girls playing in the W-League are really proud that it’s our 11th season going in and we take steps every year and increase things like pay, length of the season and the amount of players on teams. It’s these details that end up making the league so much better in the long run.

“I truly believe that it’s a process and it’s not going to happen overnight. The W-League is doing a good job of leading the way. [Parity in sport]has got a long way to go, but we are enjoying the ride and enjoying proving people wrong.”

Organisations like Women Sport Australia (WSA) have been working tirelessly for years to improve pay, career progression, training facilities, media time and leadership and mentoring opportunities for women in sport.

“Women only make up 3.9 per cent of CEOs in sport and there are only 13.4 per cent of women chairs in sport,” WSA president Carol Fox says. “Media coverage is still sitting at about 11 per cent. That hasn’t changed since I started studying in 1981.”

A large percentage of girls leave sports at the age of 12, but Ms Fox says the growing number of codes offering elite pathways provides role models that will encourage women to stay in sport.

“The old story that no one wants to watch female sports has been blown out of the water and while there are elite pathways there now, we need more parents and committees to be proactive at a grassroots level and make a stand so that things will change,” she says.

“There are still girls at local clubs getting dressed in their car because there are no change rooms for them. If you go down to a field with girls and boys teams training, you will find that the boys are training close to the facilities, while the girls are the furthest away.”

She says sponsor confidence has been the “handbrake” that has slowed down parity for female athletes. She says it was only a few years ago that the national netball competition was paying television broadcasters to air their games, but the advent of the Suncorp Super Netball series in 2017 has flipped that on its head.

But she adds most female athletes are paid “peanuts”. “The average NRL player will get around $250,000, while the average Suncorp Super Netball player will get $50,000. That’s just 20 per cent, and while we are celebrating every advancement, like tennis reaching parity in their prize money and female surfing in the last few weeks, there is a long way to go across many codes.”

Ms Pearce, who has a 12-year-old daughter, says responsibility for change reaches down as far as the grassroots clubs, and she is pleased to see more soccer and rugby sevens girls teams on the Coast.

“Once a girl turns 13, there is a national discrimination law that says if they are playing rugby or soccer, we don’t have to put them in the team anymore. I know of two very skilled girls, one who is 13 and one who is 14, who have had to change clubs and leave their school teams to find a club team that’s prepared to take them,” she says.

“Why don’t we change the rules? Society makes the rules up, so we could make a girls team with different ages within it so that they can keep playing.”

We can all do something to improve conditions and the future of women in sport, and for Ms Pearce, it comes down to three simple things: “Pay, play and watch.” 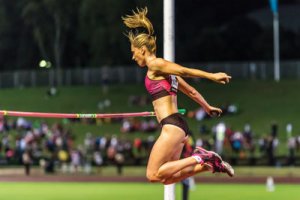 Olympic pole vaulter Alana Boyd always had a strong female role model – her mother Denise Robertson was a two-time Olympic 200-metre finalist. This set the tone for all three Boyd children to go on to make their mark in their respective sports.

Ms Boyd took out gold at the 2010 and 2014 Commonwealth Games, placed fourth at the 2016 Olympics and her personal best of 4.81 metres set in July 2016 is the standing Australian record.

She recalls being in year one when she first said she wanted to “go to the Olympics like Mum”. As Ms Boyd progressed in her skill level, she found herself training with younger men as there were fewer female competitors to be matched against. She says she never felt out of place or ostracised and was accepted without question.

She did, however, have to hold down a part-time job throughout her career to supplement her income. At one time, she had secured sponsorship from Nike, but an injury that led to surgery and a year of downtime quickly saw that evaporate.

“What I was earning wasn’t what male sports people are on. Football players can definitely set themselves up through their salaries, but I was in a position where I had to work as well as compete,” she says.

Ms Boyd, now 35, says she is heartened by the progress of women’s sport and women’s health as a result.

“We are certainly still inundated with sportsmen in society, but having the Sunshine Coast Lightning in our backyard has taken us from being a little regional area to seeing lots of other codes opening up opportunities for boys and girls to get involved in any sport that they want to.” 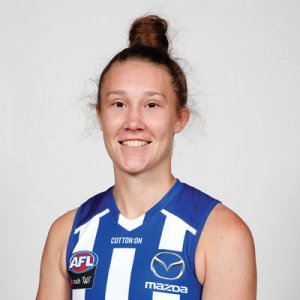 The almost seamless progression of Tahlia Randall’s AFL career is proof of how far the code has come in recent years. Ms Randall plays for North Melbourne in the AFLW and was among the pioneering women of the inaugural AFLW code as a player for the Brisbane Lions.

The Buderim-born 21-year-old found AFL at the age of eight, when she was asked to join her older brother’s club, the Chancellor Park Eagles. She excelled in the sport and was devastated when she was told she would not be able to progress beyond under 12s with the club due to safety issues.

“It’s always hard to be told that you can’t do something, let alone a sport that you are really involved in, but the club let me repeat another year even though I was older than the boys and that really helped me because I wasn’t cut off,” she says.

Her progression has been smooth sailing since then, moving into the Mountain Creek State High School AFL program and joining the Coast youth girls competition as soon as it was created.“Opportunities for girls to play AFL on the Coast continue to grow. There were just four or five teams when I was up there and now there are eight.

“AFLW is only in its third year, so it’s still a rather new sport; in terms of equality in training facilities, financially and how they help us off the field, it continues to grow. In my first year at the Lions, we were training on a community football ground and the following year, we had access to the Gabba.”