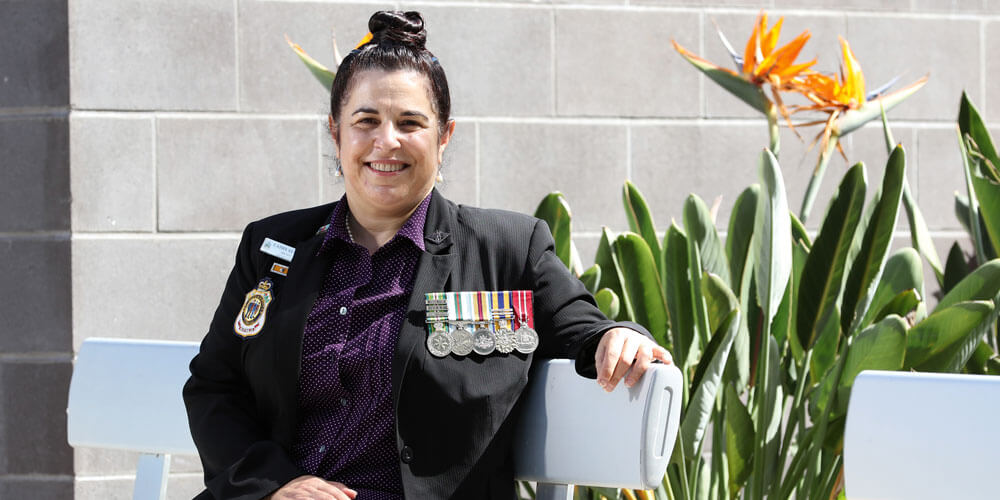 For the first time in history, women will be leading the Caloundra Anzac Day march on April 25 and Caloundra RSL sub branch vice president Cathy Stamp is looking forward to the momentous occasion.

It is a big step towards raising community awareness that the face of our veterans is changing. Not only does it include the heroic diggers of the World Wars and Vietnam, but also the men and women who have served in the many operations since East Timor.

Mrs Stamp is one of the thousands of ex-servicewomen around the country who have been challenged about wearing their husbands’, fathers’ or grandfathers’ medals on their left when they attend commemorative events.

In response to this, the Women Veterans Network Australia created the By the Left movement, which has taken the country by storm and will see women leading marches around Australia to raise awareness of their contribution to the Australian Defence Force.

Mrs Stamp says By the Left is a play on words, as medals awarded for service are worn by recipients on the left and ‘by the left’ is also a marching command.

The 54-year-old Kings Beach resident joined the Royal Australian Air Force in September 1983 at the age of 19 as a stenographer and served for 28 years until being discharged in July 2011.

During that time, she was deployed to Malaysia for three years and joined operational deployments to the Middle East and twice to East Timor, in the process moving up the ranks from enlisted person to commissioned officer.

These medals have taken pride of place over Mrs Stamp’s heart for many a commemorative service in the past, but she says just about every Anzac Day she is approached by someone who congratulates her for wearing a relative’s medals and asks her why they are on the wrong side.

“I have to correct them and say, ‘No, they’re mine’. The first couple of times it’s a bit funny, but there really needs to be great education in the community,” she says.

“I have never let that stop me from marching. I’m very proud of what I’ve earnt and what I’ve done, and I wouldn’t let anyone demean that at all. I turn around and confront them and let them know I put in a lot of hard work to be awarded these medals.”

Mrs Stamp, who was nominated the first female vice president at the Caloundra RSL sub branch, says with the number of military operations happening after East Timor, there are so many younger ex-servicemen and women who have earnt seven or eight medals and are also being misunderstood.

“Female veterans do not want to be different, we want to be viewed the same – as veterans. But to achieve this, we must first be seen,” she says.

According to the Australian Department of Veterans’ Affairs (DVA), 12,411 women have enlisted into the permanent Australian Defence Force (ADF) from January 1, 2003 to April 4, 2018. Within those 15 years, a total of 60,701 personnel have joined the permanent ADF who were 25 years or under at the time of their enlistment.

“Through a range of interviews, workshops and correspondence facilitated by DVA, female veterans have shared stories of being asked to move their medals or being challenged on their defence service by members of the public.

“DVA is committed to continuing its work with female veterans to explore new policy initiatives and identify potential new service arrangements to support all veterans and their families.”

By the Left has also reached out to include young veterans and those from culturally diverse backgrounds.

Bells Reach resident Marty Sim is 32 years old and received a four-year service medal as a rifleman from 2010 until he was medically discharged during pre-deployment training.

After gaining qualification as a marine technician, Mr Sim enlisted in the army at the age of 24 and went through the intense training in preparation for deployment before left knee and lower back injuries saw his career come to an abrupt end.

“I loved it. I loved being in defence, the challenge and wanting to feel part of something bigger,” he says.

“I went through IETs, the initial training as a rifleman in 3RAR and my discharge left me feeling worthless and useless. To come from such a highly demanding job, training twice a day, learning tactics and all that sort of stuff, to not being able to work at all with my injuries, brought on major depression as it was impossible for me to get back to work.”

Mr Sim says it wasn’t until he moved to the Sunshine Coast and found Young Veterans that he began to turn a corner, with the help of his devoted family.

“My saviour was the gym – it helped me to realise that I can get back to where I was, and I was not stuck as this broken soldier.”

Despite working in the army for four years, Mr Sim says he feels a stigma at wearing his service medal.

“One of my mates was wearing his medals from Afghanistan and he was approached to be told they were on the wrong side and when my mate corrected him and said they were his medals and he had deployed, the guy shrugged his shoulders and walked off. It really blew him away,” he says.

“I’ve worn it once in Townsville with my ex-boss and he served in Afghanistan. I was around a bigger crowd of defence people who knew me and said ‘You earnt it, you did the work, wear it and wear it with pride’.”

Mr Sim, who volunteers for Resolve Fitness and Young Veterans Sunshine Coast, revels in working with other ex-servicemen and women to get their fitness back on track and he plans to wear his medal for just the second time this Anzac Day.

Caloundra
Dawn Service: 5.15am at Lions Park, Kings Beach.
March: Participants to gather at the Stockland Shopping Centre carpark at 8.30am to march via Oval Avenue, Arthur Street and Third Avenue from 9am.
Main Service: Wreath laying service at the RSL Memorial Garden from 10am.