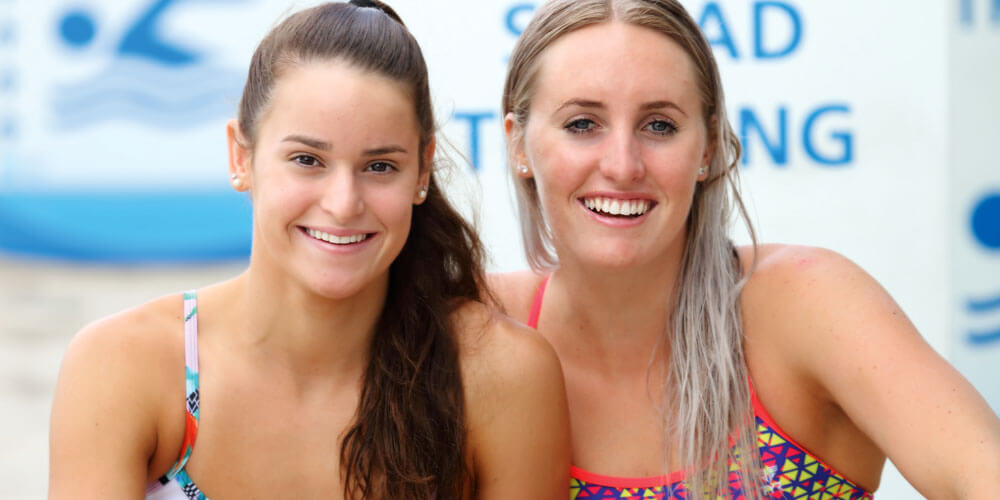 Sporting history will be made on April 4 as the Gold Coast welcomes more than 6600 athletes and team officials from 70 Commonwealth nations for the largest sporting event to be staged in Australia this decade – the 2018 Commonwealth Games.

More than 30 Sunshine Coast athletes will join the 417-strong Australian contingency at the GC2018, which will have the largest events line-up in history, with beach volleyball, para triathlon and women’s rugby sevens added to the roster. This gives sports fans 18 sports and seven para-sports to watch, and for the first time at a Games, an equal number of men’s and women’s medal events will be contested.

Among the athletes are swimming stars Taylor and Kaylee McKeown. The sisters are part of the squad of nine University of the Sunshine Coast Spartans swimmers to make it into the Games team.

Despite training together every day, the McKeowns will be on very different schedules at the Games, with 23-year-old Taylor competing in the 200-metre breaststroke and 200-metre medley, while 16-year-old Kaylee’s main event is the 200-metre backstroke.

Taylor already has a Commonwealth gold medal under her belt in the 200-metre breaststroke from the 2014 Glasgow games and was part of Australia’s silver medal-winning medley relay team at the 2016 Olympics in Rio. She is now doing what she can to help prepare her younger sister for her first Commonwealth Games.

Taylor admits training at home at the Spartans facilities at USC made the looming Games seem surreal. “The last time I was at the Commonwealth Games, I was away for six weeks. First, training in Spain before moving to Manchester and then onto Glasgow,” she says.

“Staying at home to train doesn’t make it feel like we are training for the Commonwealth Games, which has made it feel much more relaxing. But once I arrive in the village and receive our official gear and accreditation, it will become more real.”

Kaylee smashed out a time of 2.08.23 to beat dual world champion Emily Seebohm by just 0.01 of a second to take first place and an instant position on the Australian squad at the Games trials. However, Taylor’s journey was a little less smooth, touching first at 2.23.87 in the 200-metre breaststroke, but missing the Games qualifying time, leaving her place in the team to the discretion of selectors.

“At trials this year, I tried to implement a new and improved way of racing breaststroke,” she says. “The first attempt didn’t turn out as well as I had hoped and while I had swum A-qualifying times twice in the previous two days, I just missed it at trials,” she says.

“It will make it harder for me now to want to trust that race process knowing I didn’t achieve what I had wanted to. Usually, I lead the race the whole way, but this new method sees me holding back and taking off in the second half of the race. I know what I’ve done wrong, so now it’s all about correcting that and I’m hoping to come away with a win.”

All eyes will be on Kaylee and Emily Seebohm in the 200-metre backstroke as they once again battle it out for supremacy. Theirs has been a nail-biting rivalry that Kaylee says is born from mutual admiration, but their history is not something that will weigh heavily on her mind as she steps up to the blocks.

“I race [Emily] all the time and she is a great athlete, but I don’t necessarily think of how many times I’ve beaten her. I don’t like to compare myself to anyone else,” she says.

“It’s all about who is the best athlete on the day and we are working hard with our team at the Spartans to make sure we are as well prepared as we can be.”

On top of a gruelling training regime, the sisters are juggling study – Kaylee is in year 12 at Pacific Lutheran College and Taylor is studying animal ecology at USC.

Kaylee says she missed a month and a half of school last year when she competed at the World Titles, so she is used to working ahead and catching up in order to keep apace of her fellow students.

The McKeowns are not the only sister combo competing at the Games, with the Brisbane-based Cate and Bronte Campbell also on the squad.

“Cate and Bronte definitely have a close-knit relationship,” says Kaylee. “Taylor and I are quite a lot more dissimilar in so many ways, but we do spend a lot of time together.

“Taylor definitely had an influence on me [starting swimming]. Seeing her achieve so much at a young age made me want to pick it up in grade five and I soon realised that I was much better at swimming than I was at anything else I had tried. She is now showing me the ropes for my first Commonwealth Games and there are a bit of nerves… Everyone goes into a race with some sort of stress, it’s how you race well.”

Another Games first-timer is Wurtulla teenager Taylah Robertson, who is the youngest member of the Australian boxing team. The 19-year-old started boxing at the age of 12 for fitness, but quickly became hooked and decided to begin competing just a year later.

“I didn’t have any nerves at all for my first fight,” she says. “I was really excited to get in there and throw my hands. I really didn’t have much technique at the time, so I just threw as many punches as I could before the bell went. I won my first 12 fights and I really enjoyed it. I took out state and Australian titles in my first few fights before I got a few losses under my belt. Then I went on to get the Australian Youth Titles and had four international wins.

Ms Robertson’s first elite Australian title win in the 51-kilogram division last year (where she won three fights in as many days) saw her qualify for the Games and threw her into an intensive training regime at the Australian Institute of Sport (AIS), supplemented by two, three-week training camps in the Philippines with the rest of the national team.

Under the guidance of Mark Evans at Impact Boxing at Cooroy, Ms Robertson says she feels ready to take on the world and is confident of coming away with a Games medal. “I was training two to three times a day, six days a week and my coach would drive me into Brisbane every Wednesday to find sparring partners, so I could experience as many different styles of fighting and weight divisions as possible,” she says.

“A week after winning the nationals, I was off to the AIS for 10 weeks of training, home for one week and then straight back to the AIS. In the Philippines we are doing military-style training three times a day, six days a week to make sure we are fit and conditioned. We wake up before the sun comes up and do track, strength, conditioning and technique work from 11am and then boxing sessions from 4pm.

“I know all of my opponents are training just as hard, so I have to make sure I train harder than them. My passion grows every training session and being in the elites has given me more drive and bigger goals to smash now. I’m already looking past the Commonwealth Games to the World Championships and Tokyo 2020 [Olympics].”

Four members of the Sunshine Coast’s new Australian Cycling Academy (ACA) have made the Australian team and the youngest member, Kelland O’Brien, is pumped to get stuck into his track cycling events.

The 19-year-old has an impressive collection of junior and senior world titles in the individual and team pursuit, but this will be his first chance for Games gold.

Usually based full-time at the AIS, Mr O’Brien says he has been boosted by the ACA, which has selected him for the under-23 racing team, which will give him access to a development program designed to support young cyclists to reach their potential and provide a genuine pathway to the professional ranks.

Starting out as a BMX racer, Mr O’Brien switched to road racing for a couple of years but found his passion when he tried track cycling for the first time.

“I love how fast you can go, only having one gear and no brakes. It excited me from the start and I remembered watching track cycling on the TV as a kid. Luckily, it also seemed to be the form of cycling that I had the most amount of success in so quickly because I was naturally good at it,” he says. “To be selected for the Commonwealth Games was pretty unreal; it still hasn’t really sunk in for me. All of my life I’ve wanted to represent my country at a Games or Olympics and this is a dream come true.

“While I’m the youngest on the cycling team, the older guys have been really awesome ever since I’ve moved here [AIS] and have taken me under their wing to help me deal with the pressures of high-level competition. There’s no way I could do what I do without the older guys around me.

“The fact that it’s a home Games makes it that much more special. I will get to have my friends and family around me as I compete.”

Mr O’Brien will spend more time on the Sunshine Coast at the ACA racing for the team once the Games are over and says he is looking forward to the change of scenery.

With so many local athletes training hard to achieve their best at the Games from April 4 to 15, there will be no shortage of opportunities to support them.

If you want to see the action live, you can still get tickets to some events at gc2018.com.