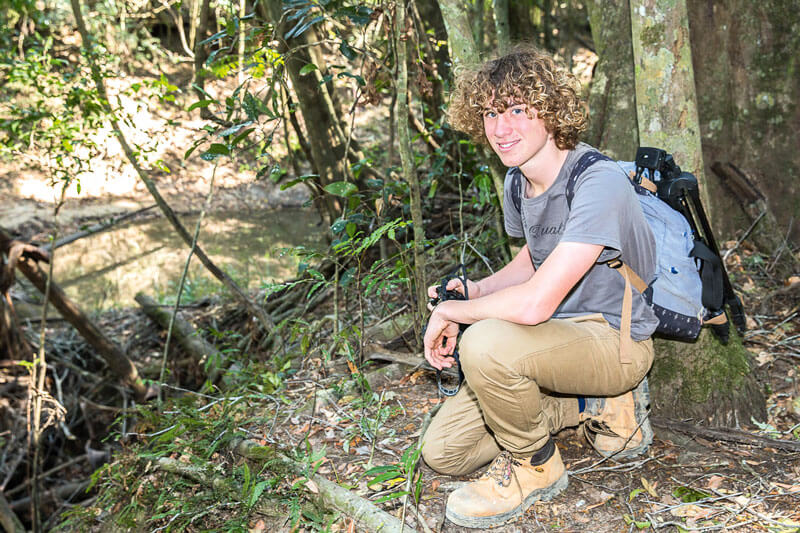 Ollie Scully has natural curiosity in abundance and he is using his passion for wildlife to pave a pathway to awareness for the rest of the community.

The 17-year-old Caloundra resident has been most at home in the bush for as long as he can remember.

He spent most of the last school holidays in pockets of bushland around the region searching for wildlife to photograph and post about on his Facebook page Sunny Coast Wildlife.

“One of the first memories I have is being truly into watching the wildlife that would come to Grandad’s bird feeder on his old property in Buderim,” he tells My Weekly Preview.

“He had everything from rainbow lorikeets and rosellas to possums come there, and I then decided to start learning all I could about them.

“As I began to learn and understand more about birds, frogs, reptiles and now all animals, I knew I wanted to help other people make changes to the way they live to conserve these animals for as long as possible.”

Scully says the rate of development on the Sunshine Coast is astounding and he has grave concerns for the future of native wildlife if more is not done to preserve them.

“I have often been in forests doing some research and come back one day to find the whole thing is a dirt patch,” he says.

“Then a couple of weeks later, houses go up. I’d love to see more people rehabilitating land and much later in my life, I plan to start buying back land for wildlife, especially in my area around Caloundra.”

Some of Scully’s latest Facebook posts include a trip into the fire-ravaged area near Aura, where he reported his awe for how quickly the area’s vegetation has regenerated.

“At first glance, it’s had a big impact in the Caloundra conservation reserve, but I followed a track down there and saw the small saplings have already regenerated, and there are goanna tracks everywhere, so they are out in force, hunting for morsels,” he says.

“While some animals were killed in the fires, those who survived have been thriving with the good nutrients in the new growth and easy vision for those who hunt.

“After all, this is how forests always were when the indigenous Australians used fire to regenerate forests and aid them to hunt for food.”

The enthusiasm is palpable as Scully recalls some of his most memorable wildlife experiences that he describes as “solitary ordeals”, which is why he takes to his blog and social media to share them. He’s also keen to start a YouTube channel.

“I draw a lot of inspiration from [Steve Irwin]; he was always an idol of mine growing up. I want to show viewers what they can see if they go beyond the city and why these amazing animals need to be conserved.

“I often think about how massive a task it is, and how complex our ecosystems are, but the bigger it is, the more I feel strongly that I need to protect it.”

While he still has one last term before graduating from Unity College, Scully has already lined up work experience with a tour company in the Kakadu National Park and is preparing to launch himself into his passion, with the aim of creating a lasting legacy and boosting the wildlife conservation message.

Going for gold
A mother’s fight for life