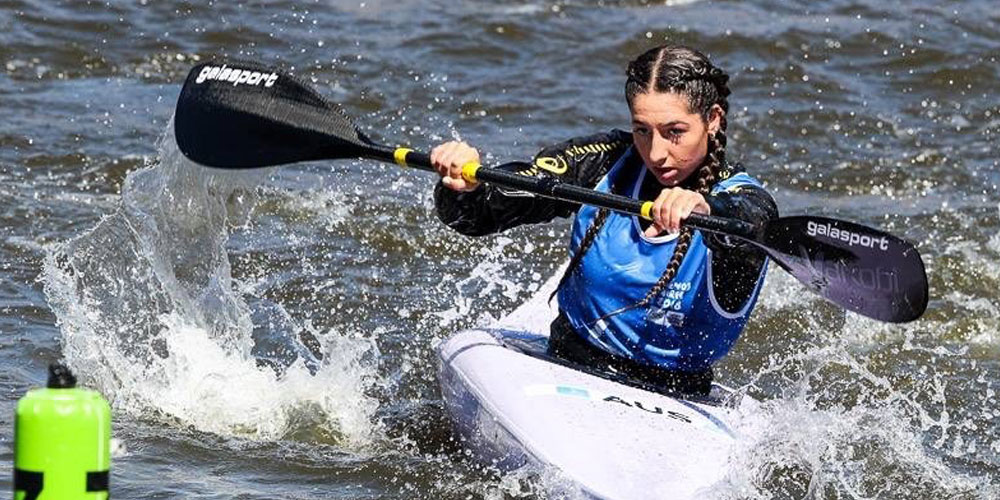 Having former Nutri-Grain Ironman Series champion Ashley Massie as a father and with Brianna and Tiarnee Massie (who are making their mark on the open women’s kayaking circuit and Ironwoman competitions respectively) as cousins,it’s not surprising Jenaya Massie is drawn to the water. “It’s in my genes,” the 17-year-old champion kayaker says.

Miss Massie was the sole Australian representative at the 2018 Youth Olympic Games canoeing competition in Barcelona and recently won gold in the K1 and K2 500 metres at the 2019 Asia Pacific Sprint Cup at Lake Karapiro in New Zealand in May.

These are just the latest medals to be added to the growing number of accolades Miss Massie has achieved on the water since leaving her roots in surf lifesaving to pursue kayaking as a 14-year-old.

Miss Massie says she initially tried kayaking as a means of improving her surf ski skills, but soon developed a passion for the sport. She made the switch and it quickly paid off – in her first Australian titles, Miss Massie won gold in the 2.5-kilometre K1 and backed that up the following year with six gold, three silvers and a bronze across a range of singles, doubles and team distances.

The Year 12 Nambour Christian College (NCC) student was presented with an Olympic flag by swimming Olympian Tessa Wallace in a special outdoor ceremony before the Secondary School Athletics Carnival on June 21.

Miss Wallace has represented Australia at the Commonwealth and Olympic Games.

Juggling exams with ongoing training, Miss Massie says she has had to make sure she is on top of her school work and assignments by doing them as soon as they are handed out, rather than having a last-minute dash to complete them on time.

“The school has been great,” she says. “Because I train three times a day in peak season, they have given me four spares each week that allow me to catch up on my study and assignments.

“I can keep on top of everything with lots of diaries and planners, but sometimes I’m not able to do what a 17-year-old would do on the weekends because I have to stay in and study, but it’s all worth it.”

Once she graduates from NCC, Miss Massie plans to study psychology at the University of the Sunshine Coast and then sports psychology, all while continuing to up the ante on her competitive edge at an international level.

“My goal is Paris 2024 and in the years along the way, I want to make the world junior teams and the Asia Pacific teams and perform well at a national level,” she says.

“The international competition standard, especially from the Europeans, is exceptional so I will be doing what I can to bring up my standard even higher. Next year will be a big year for me.”

Continue Reading
You may also like...
Related Topics: athlete, Olympics