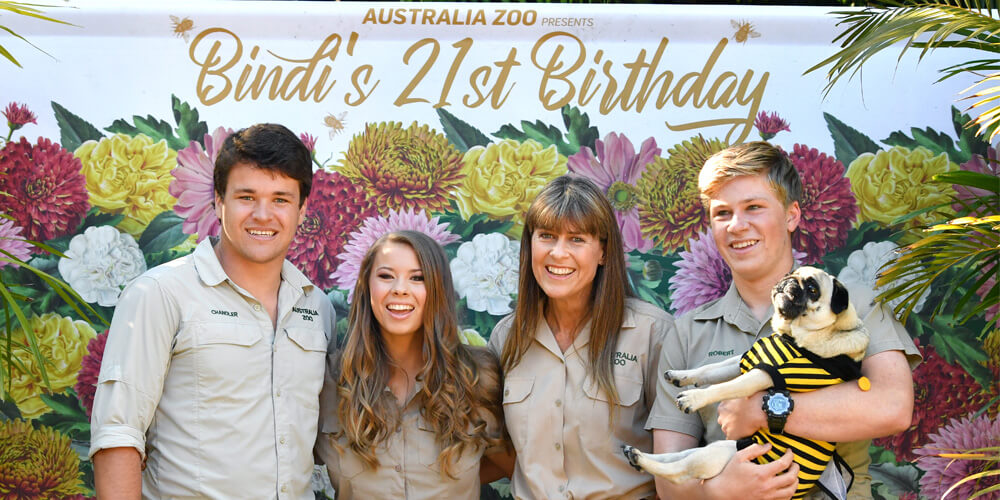 Best part of my week? Going to Australia Zoo to celebrate Bindi Irwin turning 21 years old. It turns out, she also got engaged to her long-time partner Chandler Powell. Huge congratulations to them both!

I do not know Bindi, but I am not alone in saying I feel so incredibly proud of her.

We all felt our hearts shatter when a tiny Bindi and Robert Irwin lost their dad 13 years ago. They were only eight and two years old respectively when Steve was stung in his chest by a barb from a stingray.

I will never forget that day. I was on air and our entire show turned into a tribute to the great Irwins, as tens of thousands of Coasties grieved together and flocked to Australia Zoo. None of us could believe the news. The world lost an icon and a hero, but Bindi lost a dad and a role model.

Can you imagine being tucked into bed at night by Steve Irwin? How fun he must have been as a dad. I will never forget how Steve’s face used to light up at press conferences whenever his little girl was mentioned.

I went to the media scrum the day this enthusiastic dad announced the birth of Bindi. Steve and Terri named their precious baby after their favourite crocodile (Bindi) and dog (Sue). It set a course for a unique life.

Bindi is now world-famous and has recorded multiple TV shows; is an accomplished singer and dancer; an advocate for animal and land rights; and clearly a smart businesswoman with amazing life goals.

I will be forever grateful for the Irwins’ influence over my kids. They are such wonderful role models in a world filled with cardboard Kardashians.

Thanks to Bindi and her brother, my kids love animals and are walking encyclopaedias on the subject of lemurs and red pandas.

Bindi posted on her Facebook page about coming of age: “In my life I’ve learned the value of kindness and respect.  As a young woman in this social media-driven world, I’ve found that it’s of utmost importance to be uplifting and encouraging. Stand up for what you believe in and let your light SHINE.”

My kids have run into the Irwins at the zoo a few times. Bindi has always dropped to her knees and called my little ones “love” and “sweetie”. Robert, too, has gone out of his way to talk to his little fans when he could have easily slipped away from the strangers for peace and quiet.

They are both such well-rounded and high-achieving, humble human beings.  I hope you are having a quiet toast of bubbles yourself Terri, because you have done a bloody marvellous job of raising those kids.

TV room revamp
If I won the lotto