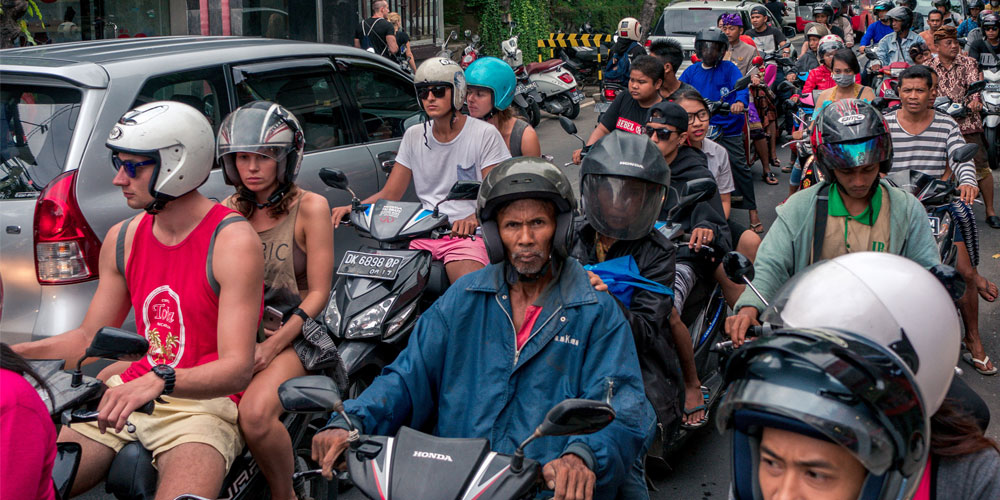 I step into the heavy air, sticky with humidity, and climb into the back of one of the smallest minivans I’ve ever seen. It would easily be the same width as my home office work desk and yet, it miraculously fits five of us plus a driver inside its slimline frame.

I am in Bali and relaxed after enjoying a few solid hours of reading a good book on the plane, a novelty I rarely enjoy being a busy mother-of-two.

This is my first time in the popular Aussie tourist destination, so I have no anticipation of what awaits me as our mini-minivan leaves the safety of the airport carpark and enters the fray of the streets outside.

Hundreds of cars, scooters and minivans just like ours are jostling for position on the road. Lanes? What lanes? We quickly come face-to-face with another vehicle. It has been all of 60 seconds and the calm of my book-induced bliss has evaporated. I grip the ‘holy s*** handle’ until my knuckles, turn white and hold my breath.

Why are there no honking horns? Where are the crazy flailing arms and shouting obscenities out the window? Is my door locked to keep out any crazy road rager?

Having seen each other before any point of impact, the drivers stop and there is silence as they calmly look around one another, put their indicators on and glide on by. It’s the most Zen almost-accident I have ever seen. I’ve had Aussie drivers lean on their horn if I so much as fail to accelerate away from an intersection the very second the traffic light turns green!

In this little silver minivan, I begin to pay a lot more attention to what is happening out the window around me. It is what we here in Australia would call chaos on the roads of Bali, with main intersections a flurry of vehicles travelling every which way (I saw just one set of traffic lights during my whole eight days there) and side streets so narrow I thought we were going to peel the sides off the minivan as our driver expertly navigated them.

What happens when someone is already parked in one of these impossibly tiny streets? The driver calmly gets out of the car and approaches the vehicle, asking politely if they can pull into
a nearby garage to allow us to get through.

Imagine if we could embody some of that road Zen here? If we just slowed down and weren’t so in a hurry. If we could understand we are all humans and yes, there will be times when other drivers will make mistakes on the road.

Instead of raging, what if we took a moment to empathise with that driver? Maybe they are pulling out in a hurry because they’ve just got a call from the school to say their child has broken a leg?

I know I will be embodying the calmness of every Balinese driver we had throughout those eight days whenever I encounter an act of randomness on the road – breathe, look for a calm way around it, carry on.

Rebellious streak
Ride like a girl is a must-see