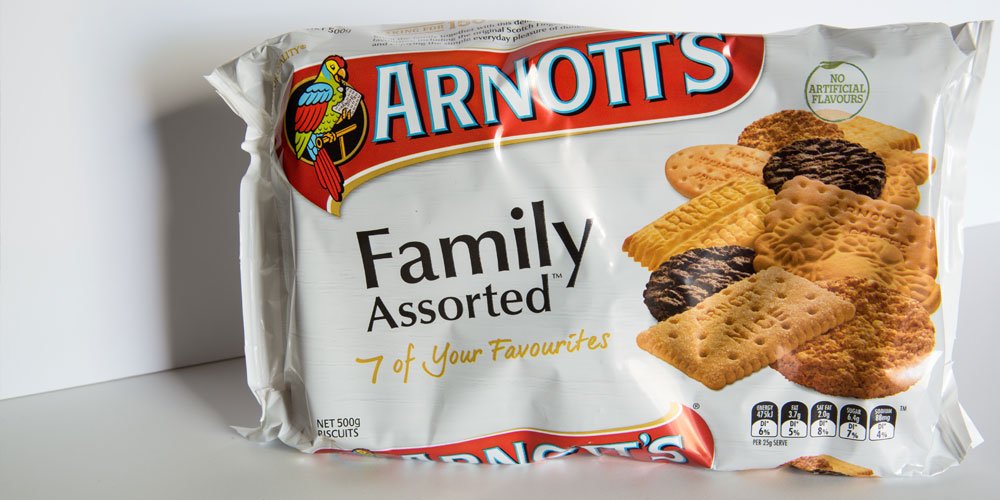 Debate has been bubbling away over the Aussie afternoon tea staple after media identity Bruno Bouchet decreed the order of rankings – from top to bottom – of the popular packet of mixed Arnott’s bickies. The Milk Arrowroot was awarded the best biscuit. Yes, the Arrowroot is a solid performer and good for many occasions, ranging from making lady-bug biscuits for kid’s birthday parties to helping to recover from a bout of food poisoning. But the top Arnott’s biscuit? No way!

Bruno Bouchet disagrees. “The Milk Arrowroot is a star. Let’s unpack it. It has a subtle flavour without the bells and whistles of the cream-filled biscuits and it does not rely on any gimmicky shapes. And then you start to add margarine or butter on top of it, and it is just an amazing snack that is in a category of its own that remains one of the greatest culinary delights you will ever experience.

“I also give it extra points because it is the only biscuit that when you bite into it, it gives you a really nice imprint of your teeth.”

Controversially, the Monte Carlo came near the bottom end of the 12 ranked biscuits. Come on, Bruno! The Monte Carlo is royalty, while Nice biscuits are literally prison biscuits. True story. Who takes a Nice before pocketing a pink cream-filled Monte Carlo? No one!

Bruno says the Monte Carlo biscuit is too thick and that is why he has marked it down in points. “Sure, the vanilla and jam cream layer is delicious, but the two biscuits the cream is jammed between are too thick and crumbly. It could be made much better if Arnott’s used the same biscuits that they use in the Orange Slice,” he says.

At the very bottom of the pile is the Butternut Snap, which sparked no debate because no one seems to care about it.

I say ‘Niece’ biscuit, but my inner bogan sometimes calls them ‘noice’ as I, at times, do channel Kath and Kim. My brother pronounces the biscuit as “Who ate the bloody Kingstons?” while my husband says he enjoys a nice Nice biscuit. In the end, Arnott’s has settled the age-old debate – “Nice biscuits were named after the city in the South of France and are pronounced the same as that city. They have been part of the Arnott’s range since 1922,” Arnott’s wrote on Twitter.

So, sleep well tonight and ponder Nestlé and Adidas.