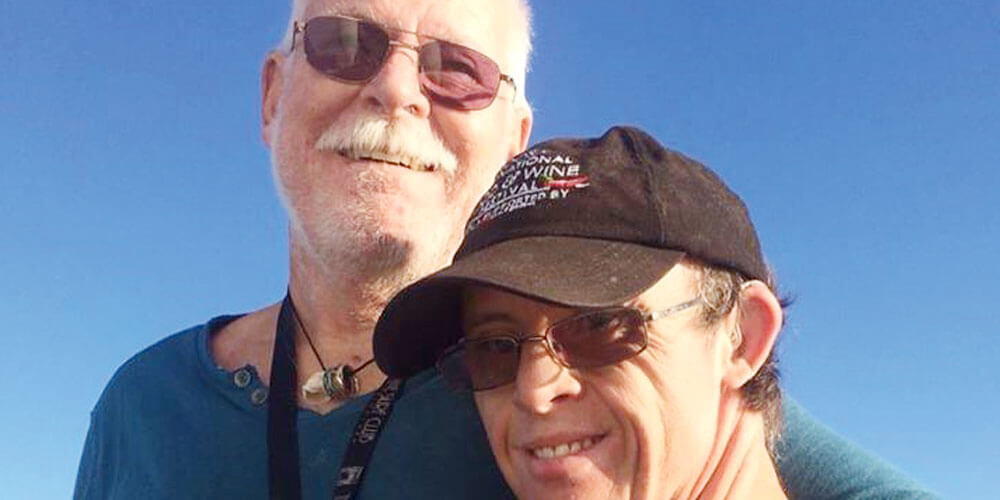 Mike Belnap with his son Ty

Mike Belnap would like people to know that being the father of a son with Down syndrome is the best thing that ever happened to him.

So much so, that he’s written a book about his life with son Ty, who went on to achieve so much more than the doctors predicted when he was born in 1978.

“The doctor pulled me aside and took me to the bathroom so Nancy couldn’t hear. He said you may have problems.

“You don’t really need to take him home you know. And he’ll never do much.”

Mike and then wife Nancy were horrified. Both teachers with an interest in disadvantaged youth, there was no chance of that happening.

“When all this happened and the doc said what he said, it was a big shock,” says Mr Belnap.

“I had to go back and face my students the next day. In Adelaide, if you had Down syndrome you went to a home called Minda Home.

“The worst thing you could get called in the playground was not a retard, it was a Minda. I walked in to the classroom and said guys, my kid’s a Minda.

Adventurous souls with a love of the water, the Belnaps raised Ty on a boat from the age of 18 months.

“We took our boat and sailed with Ty from Adelaide all the way up to Innisfail in Queensland and back again in a year. The boat was laced with prawn netting so it was a huge playpen and Ty had a safety harness with a leash on it.

“We were so concerned about Ty leaving his early intervention program for a year, that when he returned home we would see maybe we had been selfish parents.

“Ty had semi-normal milestones for everything. In Adelaide, a lot of children with Down syndrome are partial to cold and flu.

“Ty didn’t have a single cold. As soon as he got off the dock, he got up and walked. He had lived in a gymnasium. Along the way we had a little girl. We stopped in at Coffs Harbour to have her and she went to sea when she was three weeks old. All three of our kids were raised on a boat.”

The Belnaps, originally from the US, settled on the Sunshine Coast in 1993 and both Mike and Ty were involved with Mooloolaba Surf Club for 20 years.

Both keen surf lifesavers, surfers and swimmers, Mike was one of the founders of the Sunshine Coast charity surf day, The Board Meeting. Ty attended Sunshine Beach High, where he became a champion swimmer and participated in the Special Olympics for a number of years.

Sadly, Nancy passed away from cancer in 2011, which had a devastating impact on Ty.

“She was very talented in everything she did and the ultimate mother,” says Mike. “She was voracious in her quest to get the best for Ty.”

Mike has also been battling terminal kidney cancer since 2000 and is currently living in a motorhome and travelling through Tasmania, making the most of the time he has left.

“I’ve been fried, I’ve been slashed and I’ve been poisoned,” he says.

“I’d been pumping life as much as I could, surfing, surf lifesaving, doing weights. Due to my medications, I’ve lost my balance and I can’t surf or sail anymore.

“I said to myself okay, sailing is gone, I’ve lost my wife, the love of my life, I’ve lost surfing to cancer, what am I going to do? I’m going to sail on land.

“So I sold the house and bought a beautiful big 4WD motorhome. What are you going to do? Sit at home and watch Dr Phil?”

Mr Belnap has now remarried and is sharing his life on the road with his new wife Helen, who his three children, Ty, Mikaela and Rhys are all fond of.

Mike’s daughter Mikaela, a lieutenant commander in the Navy and currently based in Cairns, took on the role of Ty’s legal guardian in order to give Mike an improved quality of life in his remaining years. However, Mikaela is due to be posted out of Cairns and when she goes, Ty will have to live independently.

However, he doesn’t qualify for government assistance as he is deemed too able, despite a number of challenges and impairments.

“The NDIS in Queensland for Ty is non-existent,” Mr Belnap says. “We tried to get him into a group home but they wouldn’t take him. He has other challenges; he’s had mental illness for a while.”

Mike wrote his book, Down to the Sea, with the assistance of author Candy Lawrence in the hope sales will give Ty a passive income, but there was also another reason.

“What people need to understand is, when you have a kid with Down syndrome, they’re the best thing that ever happened to you.

“The whole purpose of the book was to provide two things. One is hope for parents who have a baby with Down syndrome. They’re aborting Down syndrome foetuses in vitro, saying do you really want to have a kid like that? People freak.

“Ty has given us every possible thing that we could have. My life has been richer for knowing Ty. I want to let people know that Down syndrome isn’t a punishment, it’s a blessing.”

To donate, visit kickstarter.com and search for: Down syndrome parenting: a story of joy and heartache. The campaign closes on May 8. Down to the Sea by Mike Belnap and Candy Lawrence will be available from Mooloolaba Surf Club in August or from monkeyread.me. All sales from the book will help fund Ty’s continuing care.