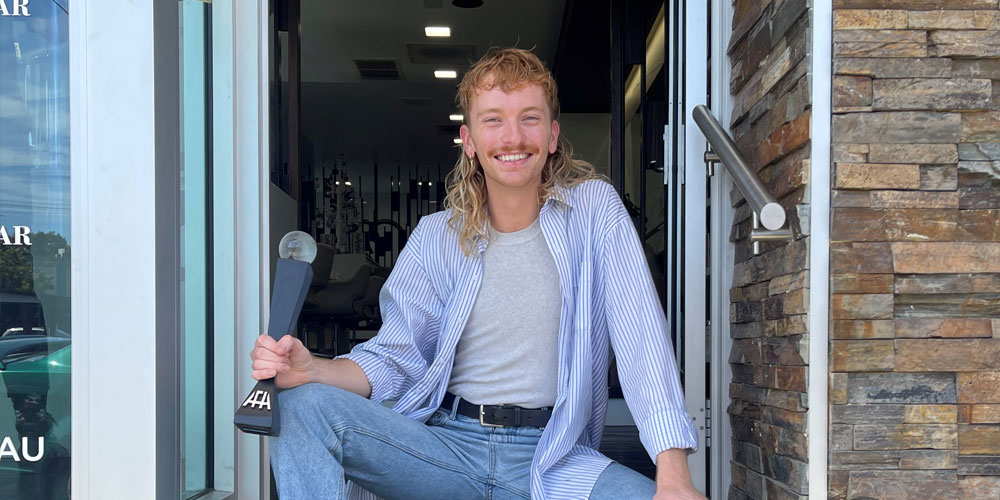 Damian Gray with his award

A week of work experience at a Maroochydore hair salon was all it took to light a spark in Damian Gray’s soul; a spark that has seen his talent emerge in a few short years. Now at just 22, he has been named Queensland Hairdresser of the Year at the Australian Hair Fashion Awards. The former Maroochydore State High School student says it’s a “massive moment” in his burgeoning career, one that could easily see him travel the world.

For his awards submission, Mr Gray produced a six-image collection of styles that were sent to a judging panel of more than 20 top stylists in London. These included Chris Appleton, stylist for J-Lo and Kim Kardashian, and celebrity stylist Eugene Souleiman.

Mr Gray hadn’t planned to become a hairstylist and originally applied to a pharmacy to do work experience.

“When I had the opportunity to do work experience, I just kind of panicked and went for the first thing I could think of,” says Mr Gray. “I applied to a pharmacist but my mum said, ‘why don’t you use this opportunity to check out hairdressing?’ I was walking to a friend’s place and I walked past House of George in Maroochydore. I popped my head in and asked if they were open to me doing work experience.

“The salon was quite prestigious and it was intimidating, but a very amazing experience. I was sweeping floors and getting teas and coffees and none of the work was glamorous, but just being in the environment was amazing.”

An inkling of his future career showed itself at an early age. Growing up in Mudjimba, Mr Gray remembers feeling a strong desire to hack the hair off his younger sister’s Barbie dolls.

“It doesn’t sound too attractive, but there was always something in me wanting to do that,” he laughs.

It wasn’t until House of George gave him a school-based traineeship, which led him to pursue an apprenticeship, that his true passion emerged.

“Being very young and not having an idea about the industry, I relied on that space to teach me everything,” he says. “Two years into my apprenticeship, we went to Sydney for a hair expo. There were award ceremonies and it was a massive space of hairdressers from all over Australia.

“It was really incredible and that was what changed everything. I experienced what hairdressing was beyond the four walls of a salon. I had new role models and started to follow them on social media.”

Mr Gray completed his apprenticeship in 2018 and moved to Brisbane to further his career. Now based in Newstead, he has worked for award-winning salon Fruition Hair for three years and loves his job.

“I love the final part of taking off the cape and seeing someone’s face light up with happiness,” he says. “Being a part of such a creative and fun environment every day – it never feels like work.”

While he’d like to own his own salon in the future, he’s happy with his day job and he also pursues his own freelance work, styling hair for photo shoots and events.

“I just want to bask in everything at the moment,” he says. “I don’t want to tie myself down or put too much pressure on myself to do anything by a certain age. I’d like to own a salon in the future, but that’s not what I’m mainly striving for.

“The freelance side of my career is definitely one I really enjoy and that’s where I see a potential future,” he says. “I’m really open to taking on a lot of new experiences. I’ve done a lot of freelance work for a bunch of boutiques and clothing companies. I wouldn’t get paid, but I was using myself as a brand and was able to use all the different images that were photographed to put towards my own portfolio. That started to take off when I moved to Brisbane and made a lot of connections and moved on to working for big global campaigns.”

A campaign he’s particularly proud of was for Nordstrum, which featured a product called Slipsilk pillowcases. The campaign appeared on 50 billboards throughout the US as well as on the Ellen show. With wins like this so early in his career, it’s not difficult to imagine Mr Gray is headed for an international career.

“If an opportunity presented itself to move overseas and work with an even more incredible industry, I would be silly not to,” he says. “Australia is amazing and I definitely love the culture of hairdressing here, but anything is possible.”

“The upcoming trends are definitely all about natural textures and movement and utilising what you have – accentuating it or adding to it. It will be about adding to natural colours to add a bit more dimension and contouring.”

Continue Reading
You may also like...
Related Topics: Business, success