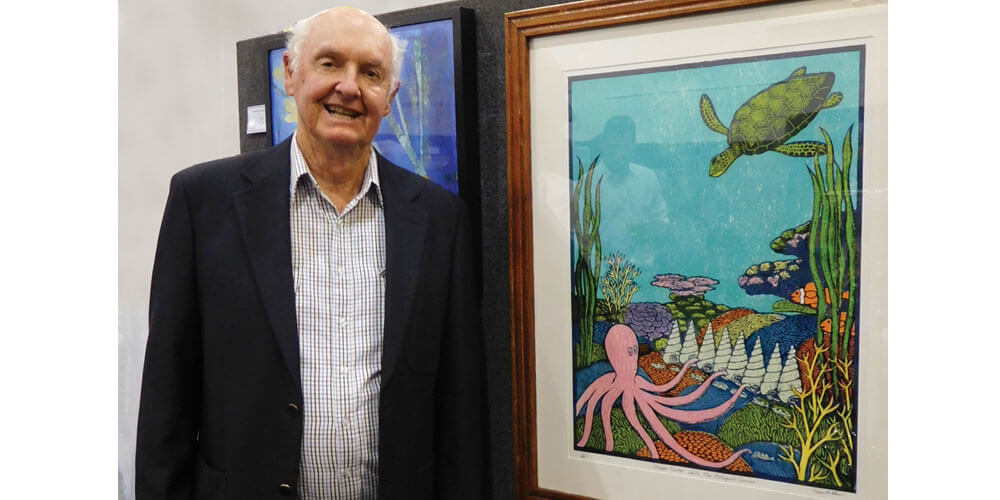 Art is something Owen Hutchison fell into by accident, and something that began as a hobby has become a full-time occupation in retirement.

The award-winning printmaker says he remembers everything he was taught about art at school, but not much of the other subjects. He was always drawn to printmaking but put that on hold when he became a high school teacher.

He taught English and humanities at Maleny high school for 17 years and when an opportunity to teach art came up, he put his hand up.

“They asked for volunteers to teach art,” he says. “I had a policy that whatever the kids were learning, I’d do one at the same time. It kept the group united. I was a real golf nut and used to play golf twice a week. It was 1994 and I had been doing a lino cut at school. One day I hurt my back and couldn’t play golf anymore, so I thought, I’ll take the lino cut home and work on it on the weekends.”

It became a hobby that Mr Hutchison vowed he would pursue seriously when he retired. He built what is now known as the Little White Wedding Chapel in Maleny, using it as an art studio and gallery called Steephill Studio.

After living in Maleny for 32 years, he and his wife decided it was time for a fresh start and moved to Sandgate in 2009, where he now owns Bayside Gallery.

He’s been devoting himself to his art for 16 years and has won more than 45 awards, including the award for most outstanding work at the 2018 Immanuel Arts Festival for his piece Green Turtle Visits the Octopus’ Garden.

“I listen to radio while I’m working and they were talking about Ringo Starr,” he says. “He wrote that song Octopus’ Garden and that’s where I got the idea. It’s supposed to appeal to all ages – little kids, they like that sort of thing. That’s the teacher coming out in me.”

This year he’s the Artist in Focus and will be exhibiting 12 pieces, each one telling a unique story or making a statement about the world we live in. One of his most popular prints, which visitors to the festival may have an opportunity to see, is called Not Watching Fish. The inspiration for this piece came from the film Romeo + Juliet, starring Leonardo DiCaprio and Claire Danes.

“I used to show the film to the senior kids doing English literature and that scene stuck in my head, where Leonardo DiCaprio is looking at the girl through the fish tank, not really looking at the fish, checking each other out.

“I have hundreds of ideas for images,” he says. “Some people say, ‘I don’t know what to do next’. I always have a list of them. I draw on a lot of things, from arts education to poems, songs, movies, the environment, politics and history. I like to have a story in my art. Nearly every print has a narrative, which some people might not recognise.”

Mr Hutchison moved from lino to woodcut printmaking because he found the wood grain adds texture to printed surfaces.

“As a kid my brother and I built boats and yachts and I built our house and all our furniture, way back when I was a woodchopper in the South Burnett. I just like working in wood. I make all my frames out of wood – it’s a good retirement activity and it keeps you active. I find wood on the footpath when people put old beds and so on out. Sometimes I buy it from the hardware store.

“Nearly all of my prints are woodcuts where I carve images into wood, plywood or MDF so that the high surfaces print and the remainder is left white. To add colours I make more blocks or sometimes use the reduction block method or combine both methods. Sometimes I hand colour small elements with watercolour or oil-based colour pencils.

“My subject matter is fairly eclectic and varies from nature to contemporary, mythological, and historical issues. I do like to include some sort of narrative in my images, to tell a story to provide interest for me and the viewer.”

“It’s probably one of the best shows in south Queensland because of its size and the prize money,” he says. “It’s so well run and there are always lots of volunteers helping you out and giving you a glass of wine.”

The Immanuel Arts Festival is on May 24 to 26, proudly supported by My Weekly Preview. For more information visit www.immanuelartsfestival.com.au.