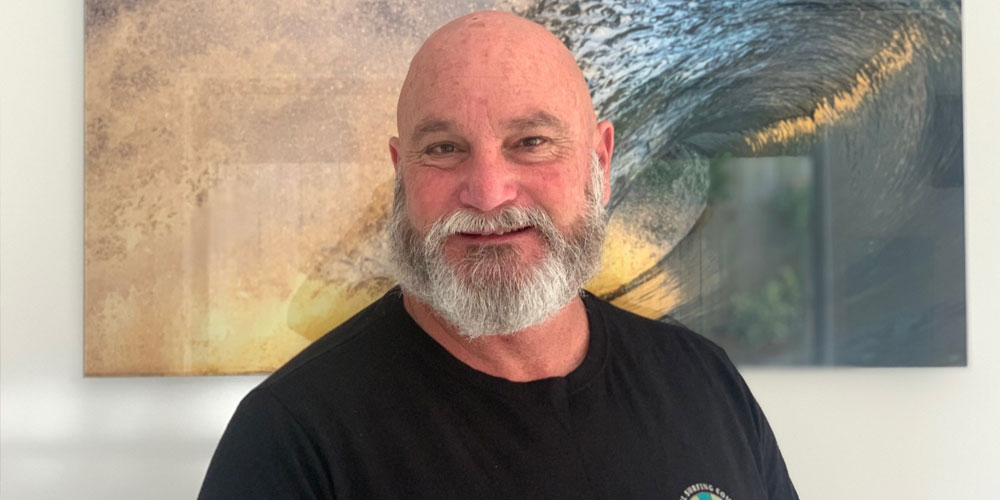 “These days I’m interested in the light and the movement.”

Sunshine Coast wave photographer Andrew Carruthers is speaking about his stunning surf shots. And yet, this comment could apply from the very moment of his premature birth and subsequent abandonment at a Brisbane Hospital, his life-changing health diagnosis at 25 or his recent diagnosis of early onset dementia.

With all of this, inclusive of the great parts, such as his school chaplain role and volunteer position as chaplain for the Longboard World Tour, Mr Carruthers navigates his life with Christian values and a zest that compels him to contribute to the community’s greater good. Innately, he’s a glass half-full sort of person.

He says he was lucky with his adopted parents. They were in their early fifties when they visited the maternity ward and  went home to the Gold Coast with a tiny baby boy. His adopted dad loved anything to do with the water – fishing, swimming – and put him on a surfboard at four years old. They were also committed socialists and he grew up in household living and breathing political debate. He clearly recalls his father going to Brisbane to share his views at Speaker’s Corner and outside Parliament House.

His father, he says, was a fatalistic, scientifically-minded, evidence-based person, not interested in religion, so he’s not sure what led him to think about spiritual things.

“I was 15 years old when I decided to join the church; there was just something in me,” he says.

Later on, when he found out his birth mother was Indigenous and his birth father part German and Viking, he says a little part of him clicked.

“It’s that DNA thing, something there inside of you – now I understand why I love small places in the bush and spirituality (from his mother) and the ocean (the Viking in his father).

On the other hand, he is proud of his heritage from the Scottish family that adopted him. “They were all editors, publishers and writers,” he says.

He explains his adoption through a unique and positive light.

“It’s like this when you are adopted,” he says. “You choose your own adventure story. You get put into another story and it’s not your family of origin.”

During his childhood, he gained an inkling of his heritage communicated through a racist lens.

“It was just said that I had a touch of the tarbrush in me – that’s all,” he says.

“It was said in a derogatory sense, and I knew it was something not to be celebrated.”

At 19, Mr Carruthers joined the Australian RAAF where he worked filling F-111 fuel tanks. Eight years later he was discharged as medically unfit. The exposure to high-grade solvents had ruined his health. To this day, one of the results from the solvents includes chronic headaches from a cyst in his brain which blinds his left eye, he says. Additionally, the poisons have damaged all his internal organs.

Nevertheless, an internal determination had led him through a life-long study of theology and onto  becoming a chaplain and youth worker.

“I was the first school chaplain at Nambour High School,” he says.

“I loved it, but after three years, my health got the better of me and I had to leave.”

Mr Carruthers explains that he is not a religious man, but he comes from spiritual place.

‘I am a follower of Jesus /God, but I have trouble with religion,” he says.

Following the school role, he moved to work from his home office and became heavily involved with the Christian Surfers Association.

“I did admin and mentoring,” he says. 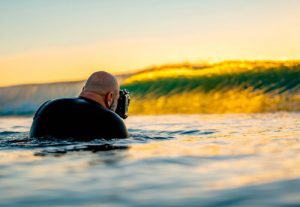 He also explains how their network stretches around the world, including building a youth centre in Bali after the nightclub bombing and doing volunteer building work in Peru after a volcano erupted.

For many years, his work has also included the volunteer position of chaplain to the Longboard World Tour. He loves this group of surfers, saying: “It’s a sort of a tribal culture there and in my role, I’m anything from a father, brother or mate.”

“With professional sportspeople, it’s all about their sporting achievements, their sense of value and self-worth is all tied up with that.

Mr Carruthers, says when these athletes have to face failure, that’s when he’s there, to connect them to their whole person.

“I’ve married them and buried them. I am there to connect them with counselling – to give them back a sense of wellbeing, spiritually and mentally.”

However, he has also experienced his own physical challenges and twice his wife and two adult children have nearly lost him due to acute heart attacks.

“It’s like this,” he explains. “If heaven is a party, I’ve got the invite, but I’m just not ready to go just yet.”

So, he keeps on ticking, even with a recent diagnosis of solvent encephalopathy, which transcribes to early onset dementia, he is not ready to let go. Instead, he and his wife are packing up and going travelling.

“If it gets worse, well at least I’ve done this. If it doesn’t, it’s still good.”

That’s why he wakes each morning at 3.50am and is in the ocean by 4.15am taking brilliant photographs of waves.

“It’s cathartic and healing for me,” he says.

And finally, he says:

Continue Reading
You may also like...
Related Topics: photographer, surf

Focusing on the future
Calendar launch