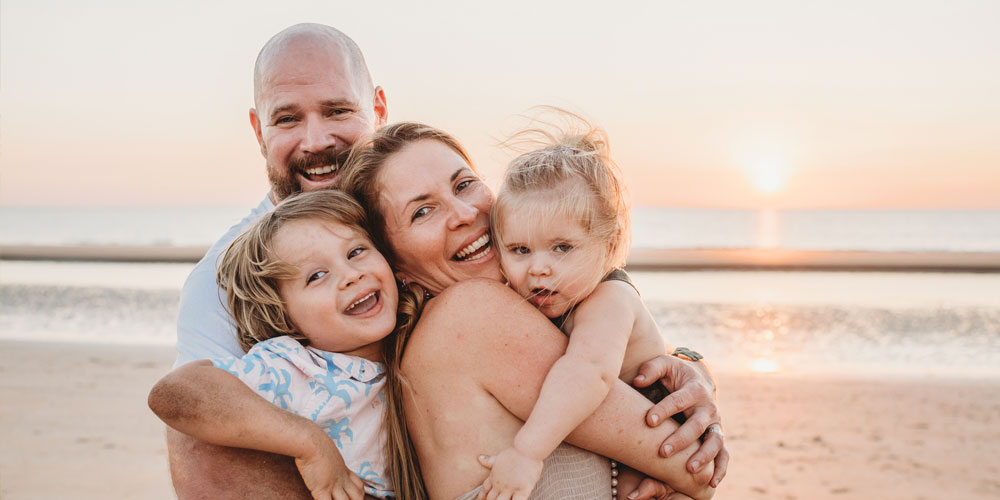 Little Finn Whitrod sits at the table, playing cards with his mum Golden and dad Chris, while his cute-as-a-button younger sister Tallulah Moon bounces on her mum’s knee, her cute, dimpled smile and sparkling blue eyes lighting up the room when I meet them at their Coolum home.

On first impressions, they are just like any other family, laughing and enjoying precious time together. But there is much more to the Whitrods’ story than meets the eye. What they have been through during the past 18 months has been a roller coaster of events that began with a diagnosis that changed their lives forever.

Originally from Darwin, the intrepid family were living the dream, enjoying a year’s sabbatical in Nicaragua when Tallulah, then just 14 months old and starting to walk and talk, began to regress and revert back to crawling, her once-confident steps replaced by frustration and lack of control, her playful babbling silenced.

“She had just started to walk and loved chasing Finn around and talking and dancing; she was reaching all her milestones and then it just started to slow,” Ms Whitrod says. “She would crawl a little bit and then lie down and cry out and then crawl again. We thought it might have just been a virus at that stage.”

Living in a remote area of a Third World country, at the height of the COVID pandemic, the Whitrods travelled three hours to the capital city of Managua where a neurologist confirmed they needed to return to Australia urgently to seek medical attention for Tallulah.

“This neurologist assessed her and within a couple of minutes he said, ‘you need an MRI and a nerve conduction study’. We didn’t even know what that was. They just said there was something wrong,” Ms Whitrod says.

“The MRI didn’t show anything like a tumour, so it gave us false hope that it was a virus and we were telling ourselves we were going to go home and sort it out and get back to normal. But there was also this terrible feeling we were hiding; we just didn’t know what was ahead and we were incredibly scared and panicked.”

Despite the hurdles they faced due to COVID-19 restrictions, within a few days of meeting the neurologist the Whitrods made a mad dash to get back on home soil.

“It all escalated so quickly,” Mr Whitrod says. “By a stroke of luck, we were able to charter a small aircraft out of the otherwise locked-down country and fly to Costa Rica. “We then boarded a mercy flight to the USA and then home to Australia.”

After myriad tests by a team of specialists at the Queensland Children’s Hospital, which were inconclusive, Tallulah had the opportunity to take part in a gene mapping study that eventually diagnosed her with hereditary spastic paraplegia type 56 or SPG56, a rare and debilitating neurodegenerative disease.

“You can’t imagine that something this big is going to happen to you; you already have your child’s life mapped out in your head, even though you pretend you don’t,” Ms Whitrod says. “You just think your kids are going to grow up, maybe go to university, fall in love. The words ‘progressive disease’ and ‘end of life’ don’t come into your story. Even when something like this happens you think you are going to be able to fix it.”

The diagnosis was bittersweet. While the couple was thankful to finally have an answer, there was little known about this incredibly rare disease or what the future held for their precious daughter.

“We were waiting for them to say, ‘there is a treatment; this is what we are going to do’, but they just apologetically said it is a progressive disease, and it’s so rare they didn’t have much information,” Ms Whitrod says. “There are many types of SPG, yet unbelievably, Tallulah is the only person in Australia with Type 56.”

After stumbling through the emotions that come with being the parents of a child with a rare disease, the couple was determined to learn as much as possible and meet other families living with a similar diagnosis.

“We connected with other families and through them, we started hearing various stories about all the very real, but expensive, treatments out there,” Ms Whitrod says. “There was genetic research leading to gene therapies for recessive genetic diseases that were successful; suddenly there was hope.

“This hope and our research led us to the Hereditary Spastic Paraplegia Foundation in Sydney. But even this amazing and very noble foundation rely on very limited funding from donors, and unfortunately, because Tallulah’s case is so rare, she is a long way down the research list.”

The Whitrods decided to approach the foundation with a donation of $500,000 to kick-start funding for research by scientists at Griffith University and The University of Queensland.

“There was no question in our mind we were making the right decision. It was a huge investment, but we’d learned what these researchers were already achieving with other rare diseases. They just needed funding to work on ours. In the end, investing in this was such a simple decision for our hearts and minds,” Ms Whitrod says.

“We sold our property in Darwin and moved to the Sunshine Coast to be closer to the research and the excellent therapists here who help Tallulah keep the disease at bay. That’s when things really started moving and we started to investigate who else could add value to this research body.”

Their research also led them to the work of Professor Alan Mackay-Sim. The Sunshine Coast resident was named Australian of the Year in 2017 for his research and treatment of spinal cord injury and rare genetic diseases. He and his team at Griffith Institute of Drug Discovery are world leaders in researching treatments for hereditary spastic paraplegia.

“The minimum symptoms for the diagnosis of SPG are progressive onset of lower limb weakness, spasticity and paralysis,” Professor Mackay-Sim says. “However, there can be other symptoms such as digestive and developmental problems with early onset.

“There are over 80 separate mutations for this condition and SPG56 is one of the rarest. In fact, there are only about 10 families in the world identified with this mutation.

“In Tallulah’s case, it’s a childhood onset disease, which has very serious consequences and is most destructive to the family. However, the wonderful Whitrods are very positive people and they are not going to let this destroy them, that’s for sure,” he says.

The most common mutation is SPG4, which generally presents in adulthood and affects around 40 per cent of sufferers.

“We have previous experience with SPG4 and we are already doing clinical trials on a treatment, which could become a treatment for SPG56,” Professor
Mackay-Sim says. “We have taken stem cells from these patients, looked at what is biologically wrong with them and then found drugs that reverse the effects of the condition.

“We will do the same with Tallulah. We are in the process of getting approval to remove cells from her to find out how they differ from healthy control cells. Then we will look at a library of chemicals and compounds that are already approved to try and treat the symptoms.”

The research could also lead to a cure using new gene therapy technology.

“If you can put in a corrected copy of a gene and get it into the cells permanently then you have a genetic correction for that disease,” Professor Mackay-Sim says.

“Gene therapy technology is changing all the time and there is quite a lot of hope one can apply this to a lot of genetic diseases like Tallulah’s.

“It’s all science. We can’t predict what the outcome will be and it’s partly to do with funding. The more funding we get, the more approaches we can start to look at.”

Inspired and driven by other families who were raising funds for rare genetic diseases, in August this year, the Whitrods established a not-for profit charitable foundation called Genetic Cures for Kids.

The charity is aimed at the discovery of drug treatments and gene therapy research to help sufferers of rare and genetic diseases and its first mission is ‘Our Moon’s Mission: to cure SPG56’. The couple aims to raise $1.5 million over the next 18 months to propel the research forward and complete the mission they started.

“We’ve spent so much time working out how we can fundraise and we realise, without the big companies behind us, we need the community’s help,” Mr Whitrod says. “We’ve asked all our friends and family to join us by running mini fundraisers on Facebook to help our charity and it’s really taken off in the most epic way. We call these amazing people who start Facebook fundraisers #TallulahsArmy.”

The response so far has been incredible, with $205,000 raised since the charity was launched and the Facebook fundraiser campaign took flight.

“It’s been absolutely flooring yet so uplifting and encouraging,” Ms Whitrod says. “The love and drive of the community behind and with us definitely gives us stamina to keep going.”

And like most life-changing experiences, their journey so far has given them a whole new perspective on life.

“Suddenly, we have this massive purpose that guides us,” Mr Whitrod says. “We don’t have the time to worry about the little things or what we can’t control. We do a better job of letting things go that are not important.

“It’s trimmed the fat off what life used to look like for us. We tend to really circle back with the kids, knowing our time is precious and hoping to God we are going to have each other for a long time ahead.”

To donate to Genetic Cures for Kids, visit the campaign website at ourmoonsmission.org.

Dressed for artistic success
Easy does it for this year