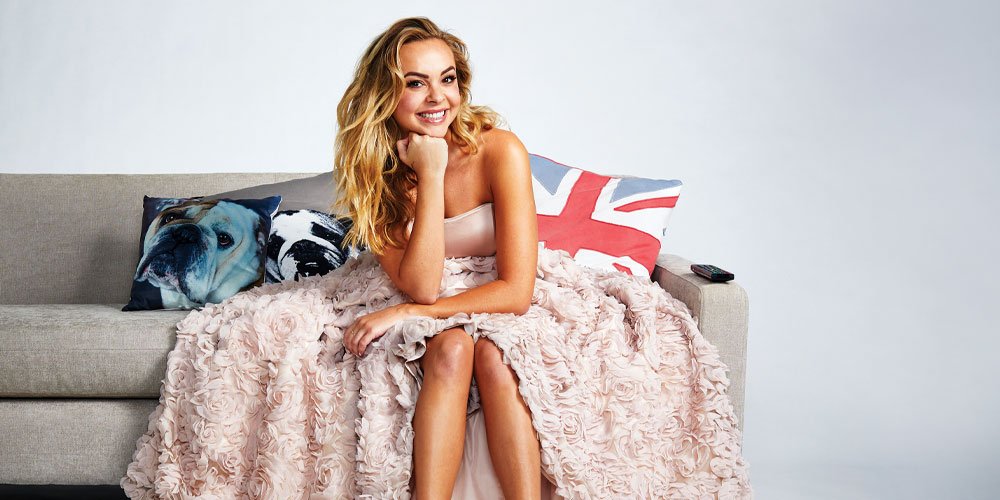 After a stellar year in which she appeared in two reality TV shows, released her first book and fell in love, the Sunshine Coast’s golden girl Angie Kent is back home to celebrate the holidays with her family and, of course, the man she met on The Bachelorette, Carlin Sterritt.

Contrary to recent rumours, they haven’t broken up. Ms Kent confirms with My Weekly Preview their relationship is going strong.

Mr Sterritt joined in the Kent family Secret Santa and spent Boxing Day at the Kent family home in Alexandra Headland, which was perhaps even more nerve-racking than competing against 20 guys to win over a woman’s heart on national TV.

After her appearances on Gogglebox, I’m a Celebrity… Get Me Out of Here and more recently, The Bachelorette, Ms Kent says she’s getting used to her high profile and getting stopped in the street when she wanders around the Sunshine Coast, where she grew up.

“I always call the Sunshine Coast my safe zone,” she says.

“It’s so nice. Even though it’s still quite full-on and everybody comes up to me, it’s not too full-on. People on the Sunshine Coast treat me like I am one of their friends or family.

“I do love being home; everyone is so warm and welcoming. I can walk around with no makeup on, looking like a grub. Some people don’t even know it’s me because I look like such a grub. It’s fab.

“Carlin and I can’t go out without people secretly filming us and taking photos, but that’s fine.

“We’re both really friendly people. We don’t mind people coming up and having a chat. It can get pretty overwhelming, but if I’m not in a great headspace and feeling really overwhelmed, I just stay home because I never want to go out and not be up for chatting to people.

“Carlin and I met in such an intense way. It’s not your average situation, dating 20 dudes at once and forming all these magical connections.

“Then he was in hiding for three months and I was out promoting the show. He goes back to normal life and no one knows who he is. Then we get thrown into the real world and everybody gets to judge the hell out of you. Some days it’s really hard, but most of the time it’s fine.”

As for marriage and babies, Ms Kent has too much happening to think about either.

She’s moving back to Sydney in January to take advantage of some exciting new career opportunities, which she’s not yet able to reveal.

“I always said that to the boys on the show. I’m not looking for a husband; I’m looking for a partner to share my life with. If that down the track turned into a husband then sure, but I just want somebody to love and who loves me. For me and Carlin, it’s just back to basics and we are just a normal couple.”

It’s this genuinely down-to-earth and unpretentious personality that has seen TV viewers around the country warm to Ms Kent. They turned out in droves to hear her speak at Maroochy Surf Club and Harry Hartog Bookseller in Maroochydore last week, where she met fans and signed copies of her new book, If You Don’t Laugh You’ll Cry.

In the book she shares her warm-hearted and witty views on love and relationships, mental health, body image and some of the hard-won lessons she’s learnt about life.

“I wrote it in three weeks after I got out of lockdown in the jungle and before I went into lockdown on The Bachelorette,” she says.

“I’ve always loved to write. I was writing ever since I was a little girl. I would always be writing stories and poetry and was always told to keep a diary to express myself and my feelings and all that jazz.

“I studied creative writing in the United States and at Queensland University of Technology. I more dabbled than anything. When I was approached by Hachette to write a book, they just wanted me to talk – they didn’t realise I could write.

“I know I’m only a young gal; I haven’t lived a thousand lives. It’s just life lessons and stories from your best mate, from the gal next door who has seen some stuff. It’s about living your best life, even if you haven’t had everything handed to you.

“People have reached out to me and been really supportive and said they couldn’t put it down.

“They love how raw and honest I am.

“I just want people to know that they are not alone and everybody’s got a story. Everybody’s story is worth sharing. You’ll never know who you can help.

“I want people to know everybody is struggling and you can get help with certain issues. You can reach out. There’s so much you can do these days to help yourself and I feel like people don’t.

“After reading this, I hope people see that it’s okay to struggle and you need to love yourself, put number one first and just enjoy yourself.”

If You Don’t Laugh You’ll Cry by Angie Kent is published by Hachette and available now in bookstores.