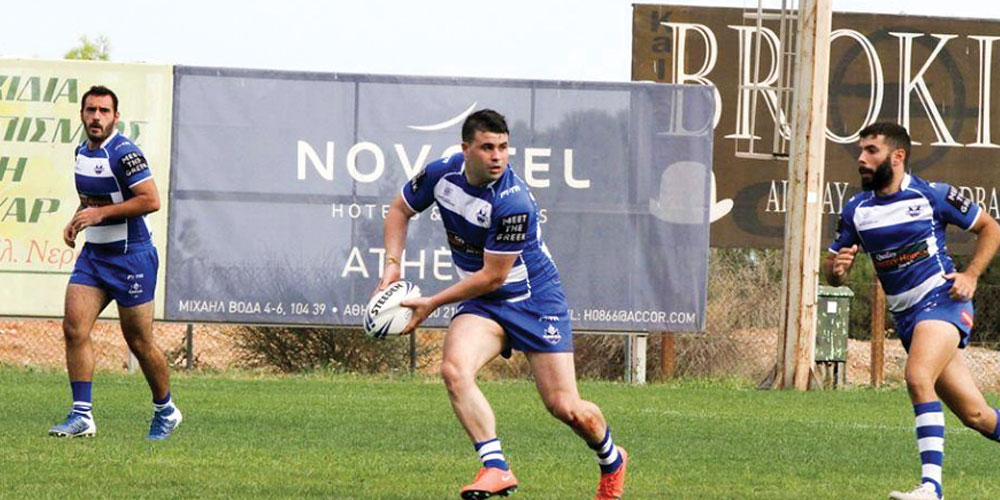 Growing up in the rugby union heartland of Wellington in New Zealand, Jordan Meads had strong aspirations to become an All Black.

The Beerwah Bulldogs A-grader recalls how he used to spend “every spare second” running around pretending to be famous footy player Christian Cullen, and how his parents would have to take his All Blacks jersey off him while he slept as he wore it all the time.

The father-of-two made the transition to rugby league where he reached the professional ranks and was head-hunted by international clubs. He is now preparing to travel to London next month to represent the Greek Rugby League Association and captain the team in the Greece v Norway Rugby League World Cup qualifying match.

Mr Meads says he holds his Greek heritage close to his heart. His mother is Greek and his grandparents, who have lived in New Zealand for almost 40 years, migrated from Greece as a result of WWII.

“I have a tradition that before every international game, I send my grandparents a letter and thank them for the sacrifices they made so that I could live the life I live and play the game I love,’’ he tells My Weekly Preview.

“As soon as I finish writing the letter, I know it’s game time.”

He admits when he signed his first professional contract with the New Zealand Warriors, there was a box at the bottom of the form that asks which countries players qualify to represent and he wrote down Greece “more as a joke than anything else”.

“Soon after that, I remember getting a call from the general manager of the Greek Rugby League Association asking if I wanted to be part of the squad. At the time we had a strong foundation of a team – New South Wales State of Origin five-eighth Braith Anasta, Sydney Roosters prop Michael Korkidas and Penrith Panthers head coach Steve Georgallis were all there.”

“Over time, those players have retired, however it was that core group that inspired the next generation of Greek-heritage players to put their hand up. We now have hundreds of players vying for a spot in our team – it’s a good problem to have leading into the World Cup. No one thought we would be a game or two away from making a World Cup, however we have worked really hard over the past four years and the exposure is helping us generate a heap of support. Greeks are passionate about anything Greek, so the support we have received to date has been unreal.”

Mr Meads spent two years with the New Zealand Warriors, and was part of the Under-20s squad that won the 2011 grand final against the North Queensland Cowboys. He then received a full-time professional contract in France at Sporting Olympique Avignon, followed by a year in England with the Newcastle Thunder before an offer from the Sunshine Coast Falcons came up and he relocated to the Coast five years ago.

He recently signed with the Beerwah Bulldogs to complete in the SCRL A-Grade competition.

“We were very lucky to coax him to Beerwah,” he adds. “He is about promoting the game at all levels and with all age groups. He has a good attitude and this really does speak volumes about him as an individual.”

Although Mr Meads continues to field offers to head back overseas to play at a professional level, he is content with the Bulldogs and being a heritage player in the Greek Rugby League Association, which means he can compete with the Greek team while continuing to reside in Australia. The Beerwah Hotel has sponsored Mr Meads so he can make the trip to London to help the team win a spot in the World Cup.

“I make a conscious effort to call or Skype a couple of times a week to see how [the rest of the team] are going and catch up on their preparation,” he says. “They get up in the middle of the night to watch every NRL game and they idolise the sport more than anyone I have ever seen. There is no secret that the success of our program is the development of Rugby League in Greece – the World Cup is just a cherry on top.”