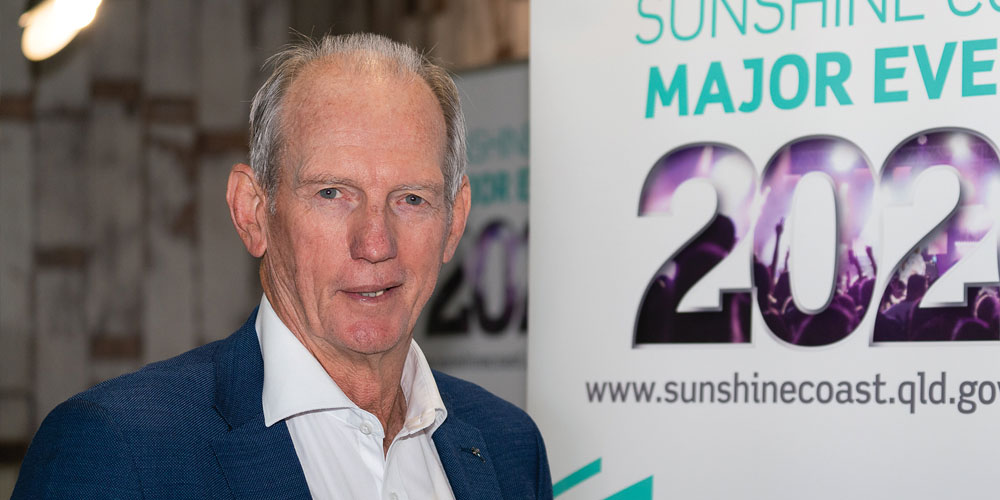 Having secured the top position among Australia’s National Rugby League supercoaches, with nine grand final appearances since his illustrious head coaching career began in 1987, Wayne Bennett knows a thing or two about what makes a great leader.

Now at the helm of the South Sydney Rabbitohs, the NRL’s longest-serving coach shows no signs of slowing down.

Speaking at the Sunshine Coast Council’s Get Ahead of the Game breakfast last week to launch the 2020 major events calendar, Mr Bennett says he is stoked to bring the Rabbitohs back to the region next year.

The Rabbitohs became the first Australian NRL team to play a game for premiership points at the Sunshine Coast Stadium earlier this year, attracting a record capacity crowd of 15,000 when they took on the New Zealand Warriors on April 13.

Mr Bennett, who has owned an apartment on the Coast since 1992, says it is always incredible to see a regional area show their support for the game and he hopes the stadium, which already has “great facilities” will only get bigger in the future so more people can enjoy the spectacle.

Speaking candidly at the breakfast event, Mr Bennett says he has struggled with balancing his passion for NRL with his introverted nature, which makes him uncomfortable in the limelight.

“I have been challenged all my life to put myself out there. I love what I do, but you pay a price for it,” he says.

As head coach, he is under constant scrutiny from his peers, the media and passionate NRL fans and the buck stops with him when it comes to the on and off-field behaviour of his team, but he says it’s a choice he stands by.

“You can’t be at the top of your game all the time, some days I can deal with four or five crises in a day and I’ve got to just deal with it, got to be there in that situation, be there for that person,” he says.

“There’s a reputation I have where I’m not going to tolerate fools or bad behaviour, there are consequences for that. Everybody I employ has a family, a house, and we are all linked. If I fail, they fail and if they fail, I fail.

“If you want a team to succeed, everyone needs to be part of the team. No exceptions. If you have those thinking that they are above the team, you don’t have a chance.

“I only have two rules and the rest are just boundaries. The first rule is don’t be late. The second is to stay out of the gutter.”

A motto Mr Bennett swears by is to “love many, trust few and paddle your own canoe”.

“At the end of the day, the best way to improve the team is to improve yourself, it’s the one thing you don’t want to hear. You may be part of the problem too and you have to manage yourself better than anyone,” he says.

“I know myself extremely well and I know that when a hard decision has to be made, I can be restless and my mood changes immensely. I take my baggage away and I don’t do a lot of talking for 24 hours. As a great leader, you can’t push it away, pretend it didn’t happen or cover it up. Things have to be dealt with. If you’re not prepared to do that, don’t do the job.”

Mr Bennett has clinched seven NRL premierships in his career, which has been filled with as many hard knocks as triumphs.

“There have been lots of times where I could have given up. One of my first coaching seasons, in 1984, we’d just been beaten 42–2 by the Wynnum Manly Seagulls in the grand final [Intrust Super Cup, the level below NRL], the most embarrassing moment in my life as a young coach,” he says.

“As we were leaving Lang Park, as it was called then, I was in the back seat of the car when my mother-in-law, as only a mother-in-law could, turned around and said, ‘Why don’t you give up coaching?’ From that, came great determination that I would come back. The following year, we won the grand final against the same team.

“I was being called to be sacked. When that goes on, don’t throw the baby out with the bathwater and overreact. I went back and rebuilt the team. I had a plan from the moment we started training that season because I knew that Wynnum would once again be the team to beat.

“I realise now that if I’d given up in that difficult moment, a lot of the greatest moments of my career would never have happened. I wouldn’t be here today if I hadn’t made commitments to myself. The difference between the dreamers and the doers are those that do make commitments and honour those commitments.”

Mr Bennett says experiences like this have strengthened his mental toughness and self-belief, qualities that he seeks in every one of his players.

“Earlier in my career, I was a softy for the underdog, for the guy that showed promise but hadn’t yet shown up. Now, I pick guys who can get the job done. That fire has got to already be there, you can’t make that shit up,” he says.

“My biggest fear now is that I will employ the wrong person. I would rather work with one or two less people on the team than to bring in someone who won’t perform.”

He has worked with a number of incredible leaders and says they come in many different packages.

“Sam Burgess is a natural born leader. He has charisma. Darren Lockyer, on the other hand, was someone who had to step up to leadership. He is introverted, like me, and he became a great leader because he wanted to make that change,” Mr Bennett says.

Simplicity is the key to happiness for Mr Bennett. For him this means a 30-minute run every day, dedication to his sport and to his family and being a fearless decision maker.

He has already signed on to remain with the Rabbitohs in 2020 but won’t speculate on his future beyond that.

“When I’m sick of it and tired of it, I will walk away from it,” he says. “Leadership is a great gift of service and one that I love. I’ve learned to just be an original, it is always worth a lot more than a copy.”

Sunshine Coast Mayor Mark Jamieson says 2020 is “shaping up as another cracker of a year,” with more than 60 major events on the Sunshine Coast calendar.

We can expect around 11.5 million visitors next year with a wide array of entertainment, sporting and cultural events creating an attractive pull for the region.

“This is the culmination of many years of planning, negotiations and crystallising opportunities for the millions of visitors we get each year,” Mayor Jamieson says.

Some of the 2020 major events include the Nutri-Grain Australian Interstate Championships and Iron-X Ultimate Challenge in January, the National Outrigger Sprint Titles in February and Elton John’s Farewell Yellow Brick Road concerts in March.

April brings the Sunshine Coast MultiSport Festival and May will bring the NRL Cronulla Sharks V Cowboys game, followed by the Holden Women’s State of Origin in June and the South Sydney Rabbitohs v NZ Warriors game in August.

The Queensland Garden Expo will be hosted in the region in July and the Ironman 70.3 will hit our shores in September. The Caloundra Music Festival and Netfest will hit in October and the Rip Curl Gromsearch will take place in December.

For the full calendar of events, visit sunshinecoast.qld.gov.au/events.