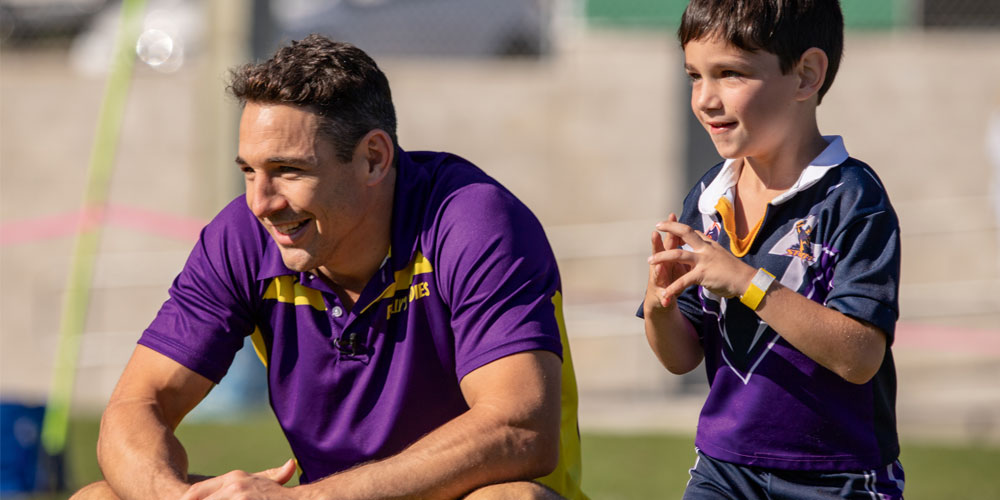 It was on a Sunday in March 2003 that a nervous, young lad from Innisfail walked onto the football field for his debut NRL game. Little did the crowd know that they were witnessing the birth of Australia’s greatest fullback of all time.

This kid from a small Queensland country town took no time announcing his arrival to the world of league, scoring a long-range try and launching his career into the NRL’s million-dollar club.

Billy Slater scored 19 tries in his first season – the highest try scorer for the Melbourne Storm in 2003. But it was the following year when he gained national and international attention, earning the name Billy the Kid.

Mr Slater had made his State of Origin debut and in game two – just two days shy of his 21st birthday – he scored two tries, one which has gone down as perhaps the greatest individual Origin try in the game’s history.

The 34-year-old is now the greatest try scorer in league finals history and Storm coach Craig Bellamy has credited him with changing the way fullbacks play the game.

All of this from a person who almost bypassed a career in football.

As a keen horseman, Mr Slater left school at the age of 16 and relocated to Sydney where he worked as a trackwork rider for Gai Waterhouse. But the game he had loved as a kid was calling.

“What if I had chosen to stay in Innisfail to play for my local club and not followed my dream to Brisbane Norths, where I played alongside a couple of teenagers named Cameron Smith and Cooper Cronk?” he writes in his recently released autobiography.

“What if serious injury had kept me on the sidelines at the start of my career, not near the end? What if I had stayed at the Waterhouse stables in Sydney, not hitched a ride on a banana truck back to Innisfail and played rugby league again?”

Celebrating his 300th game earlier this month, Mr Slater, who was born in Nambour and spent the first few years of his life on the Sunshine Coast, says he is extremely proud to reach the milestone.

“I notched up the first 270 pretty quick but the last three years has been a bit slow so that makes it that little bit more special.

“My body is feeling good. It’s great to be active. From a team perspective, the season is going okay for us at the moment.

“The focus is on ensuring that the right preparation goes into each training session, then we come together with a positive mindset on game day.”

On Mother’s Day, Mr Slater swapped his Storm jersey for a different uniform and spent the morning mentoring 200 kids at the Maroochydore Swans Junior Rugby League Club as part of his Billy’s Buddies program.

Holding the attention span of children aged between two and six is no easy feat, but he knows only too well the importance of starting sport young.

“I was only four years old when I played my first game,’’ he tells My Weekly Preview.

“I didn’t really know what I was doing but loved being out there and a part of the team. I always played footy whether it was running around the yard or down at the local field. Usually with bare feet, but I loved it.

“For me, it wasn’t about scoring a try and it still isn’t; it was and always will be about playing the game that I love, enjoying myself and trying to be at my best every time I play.”

Billy’s Buddies was born out of this passion. “My wife Nicole and I have two beautiful, healthy and active kids, Tyla and Jake. We love doing plenty of activities as a family, whether this be cooking together, kicking the footy at our park or simply taking the time to relax in each other’s company.

“The idea of Billy’s Buddies seemed like a fantastic way to help young kids… learn about some really basic ball skills. These skills, which involve a non-contact and non-competitive approach led by our experienced coaches are vital for kids’ development.

“My love of footy, moving and being active seemed like a natural extension of me wanting to give something back. Partnering with child-care centres, local footy clubs and franchisees provides kids and their families with a safe environment to learn.

“The programs are run by trained coaches who are passionate about kids’ activity and health. Kids learn about running, passing, jumping and generally having fun. Our goals are to get kids moving and get them smiling.”

From personal to professional goals, Mr Slater remains focussed on the current season.

“Footy was always in my blood,’’ he says. “Footy and horses, I should say. Two of my greatest passions. I loved riding and I loved playing footy.

“As I got a bit bigger during my teenage years, my dreams of winning a Melbourne Cup were passed by my keenness to get on the footy field.

“Strangely, I did tell my grandmother, ‘I’m going to be a famous footy player one day’.

“I think I was about seven or eight at the time. The day that it’s not fun anymore is the day that I will start to think about what my next path will look like.”

What do you like about the Sunshine Coast?
We love the Sunshine Coast. Due to my footy schedule, we don’t get up here as much as we’d like to. I’m a fan of the beaches, love a good coffee and I find that the area is pretty laid-back, which suits me.

You were born in Nambour?
Yes, this is true. Dad was playing for the Maroochydore Swans at the time. I was three-and-a-half when we moved to Innisfail.

Tell us something we don’t know.
Ummm, I love my country music. And I do shed a tear in sad movies, which I may have been known to blame on hayfever.

As a dad how do you encourage your children to stay active?
I believe what we teach our kids when they are young will be ingrained in them for life. I try and lead by example and make being active fun.

Sebastian Terry asks ‘What’s on your list’?
The Hedge at Buddina launch