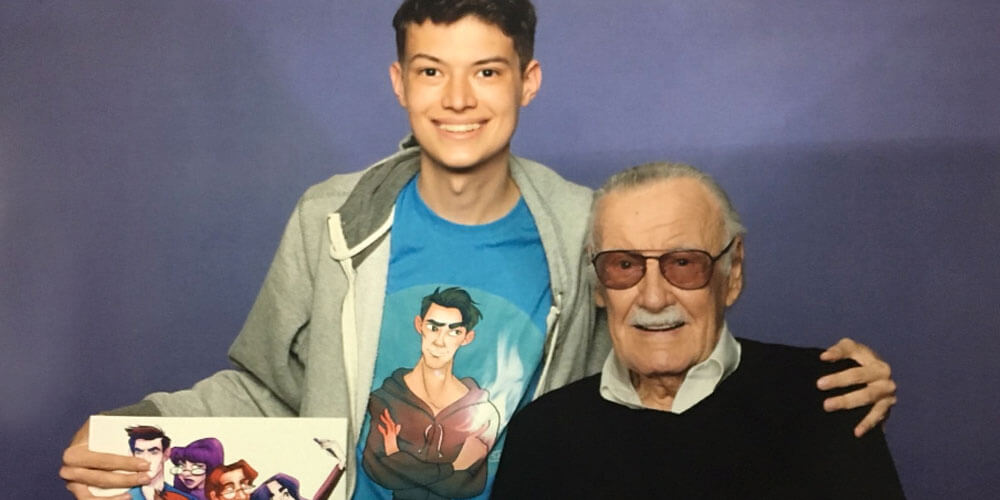 The next Stan Lee could be residing on the Sunshine Coast.

A comic book created by 18-year-old Callum Young and his 26-year-old sister Tatiana Lawton has been making waves in the world of graphic novels.

Mr Young was in Year 10 when he first started to create the intricate world of Callum Bond, a fast-talking graffiti artist who gains incredible powers after being struck by a meteorite. With street gangs and police on his tail, he finds he can blast cosmic energy from his eyes, hands and, well, other places.

The lead character is assisted by a team of brilliant young women, led by a wealthy astrophysicist, who helps him become a teenage superhero – Infamous Bad Boy – but there are evil forces who know the secret of his power and will stop at nothing to take it from him.

Mr Young identifies as a young man living with autism spectrum disorder and while he injected a lot of humour into his work, he says the villains in the comic are bullies “and Bad Boy is just the person to deal with them”.

Ms Lawton, 26, says she was amazed at the depth of her brother’s writing and his descriptive narrative helped her translate the story into a graphic novel under Mr Young’s guidance. “Callum had this world in his mind and he had been writing these stories and kind of telling me about them in passing. It wasn’t until I helped someone with a comic for a school project that he realised this could be the answer to getting his story out there,” she says.

“He had this depth to the characters and had already figured out their life story and their motivations for things. It was really incredible and I was impressed. I got really swept up in the world and when I was reading it, I could already see the characters and their personality, he is a very talented writer.”

The siblings ventured to Supanova in Brisbane late last year to release Infamous Bad Boy Volume 1 to a wider audience outside the Sunshine Coast.

Ms Lawton says while her brother was nervous at first, he quickly came out of his shell as convention-goers stopped to ask about the comic.

“There were a lot of people who spoke to us that had autism or who knew someone who has autism and they were really inspired by Callum and really connected with his story, which was lovely,” she says.

“We were interviewed by Supanova TV and also had DC and Marvel illustrators Jon Sommariva, David Yardin and Tom Taylor come up and tell us how much they liked our work, which was incredible. It’s a complete buzz to get that feedback and know that the things that you put your heart into resonate with other people. It’s the biggest reward you can hope for.”

Ms Lawton will take Infamous Bad Boy to Supanova in Sydney next month and they have sent some copies over to the US to see if it can gain any traction there.

The duo has disability organisation Parent to Parent (PTP) to thank for helping them to reach for the stars. PTP supported Mr Young to apply for a Regional Arts Development Fund grant, which meant there was greater capacity to explore options for him to realise his dream of creating graphic novels.

PTP national project manager Veronica Wain also approached the University of the Sunshine Coast to explore possible avenues for Mr Young to be mentored in his craft.

The university’s director of engagement, Dr Eva-Marie Seeto, introduced Mr Young to lecturer and creative Thomas Hamlyn-Smith who says the project has been a joy and privilege to work on.

“So many writers struggle to find an engaging storyline and characters. Callum’s work has both with the added bonus of being able to write humour – one of the hardest genres to master,” he says.

“I really can’t believe how far we have come and that Tatiana has been able to translate Callum’s ideas in four short months to the standard we see in Volume 1.”

Ms Lawton says they already have interest in the second volume and she hopes sales from the first release will fund the rest of the series.