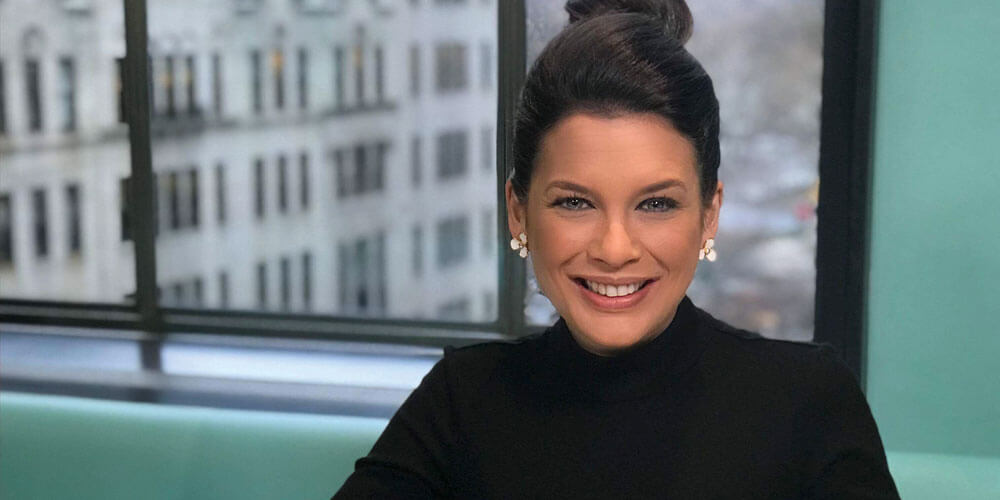 Channel Seven journalist Amelia Brace is the epitome of a strong, smart and successful career woman. Behind her dazzling smile is a steely determination to fulfil her potential, which surfaced when she was a young girl growing up in Caloundra. A dedicated student, she battled relentless bullying and refused to let it drag her down.

“The bullying saw Amelia apply herself even more to being a successful student,” says her mother, Jane Tozer. “It was in high school she developed a passion for modern history and the politics deeply embedded in the 20th century.

“Her maternal grandfather was passionate about politics and the rights of the working man, so her early interest was also sparked by him, and further fuelled by her stepfather. She competed in debating competitions at an elite level where she thrived at being able to think on her feet and developed her skills at speaking in front of a crowd.”

Ms Brace graduated from the University of the Sunshine Coast with a journalism degree in 2008 and now lives in Los Angeles, working as a US correspondent for Channel Seven.

But it was the three and a half years she spent in the Federal Press Gallery in Canberra – a career goal she achieved before the age of 30 – that has had the most impact on her.

“That was my dream job,” she tells My Weekly Preview on a recent visit home. “It was amazing. When I first got there I was like a kid in a candy store.

“I spent a lot of time working contacts and chasing stories. I ended up with good relationships with senior politicians and ministers. It was interesting to talk to people about how they approach the issues that affect us. I always think of Betty in Blacktown. She’s my audience in my head. How will this affect Betty? Is this something that will make her life better or worse?”

Ms Brace says while she loved her work in Canberra, it was also intimidating.

“There was always something new happening. I studied a lot of politics and something would be in the Senate and you’d think, oh my God, I have no idea what’s going on at the moment. I was the Sunrise reporter there and was doing crosses right from five in the morning every day. It was up to me to steer the ship, with Mark Riley and Tim Lester.”

The offer to work in LA came out of the blue and while she was hesitant to leave Canberra, she realised it was an offer she couldn’t refuse and made the move in April last year.

“My goal was always Canberra and I got there,” she says. “It’s weird now because I’ve done it and exceeded it. I don’t know where I’ll move after LA, but I’m happy to stay there for a few years.

“It’s such a huge life upheaval. At first I felt like the whole place needed a facelift, it was a really gritty city. But once you live there, you know all the places to go and the places to be. The grit of it kind of becomes its charm. That’s what makes it so different and cool.

“People are really friendly and they’re interested in our politics, given the situation with Donald Trump. Over there, everyone’s a lot more politically minded, interested in talking about universal health care and our education system.

“California is very progressive and they definitely didn’t vote for [Trump], but travelling through the south and the rust belt, people who did vote for him and are happy with what he’s doing, they wanted isolationism and America put first. They were being forgotten in those manufacturing towns, and you can see their perspective.”

Brace is in a relationship with an Australian cameraman she met in LA but he knows if he makes dinner plans, to expect her to cancel at the last minute if work calls.

“On the west coast, a 6pm live cross [to Australia] is 1am and if you’re on the east coast, it’s 4am. That can get to you, but it’s not every day we’re staying up that late. In one week I can be in New York, then DC, then somewhere in the south and back to LA – you just don’t know where you’ll be.”

Ms Brace has covered some challenging stories during her time in the US, including the Las Vegas shooting.

“I was in Vegas in the hours after the massacre,” she says. “We were there for days, doing crosses and stories – there were distraught people everywhere. People were walking around looking for loved ones. It’s rewarding being able to tell the stories of people and the victims of that massacre and draw attention to what is such a big issue in terms of gun control.”

While she likes to sink her teeth into the tough stories, being based in LA also requires her to cover awards events, which this year have been marked by a major difference.

“I live in Hollywood and it’s just got this feeling at the moment like it’s time for change. It’s not just the big stars, it’s really trickling down.

“It’s a shame it had to come to this and there had to be this huge movement for people to realise it’s not okay to do things to other people. I think it’s an amazing time to be over there, when it’s so politically charged in so many ways.”