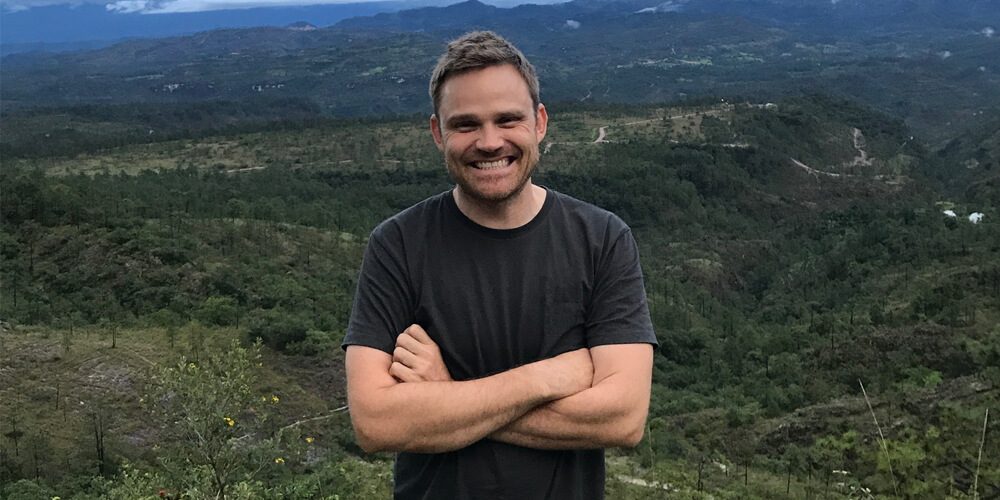 Tim Adams believes a balanced diet consists of a coffee in each hand, though if he had 10 hands, they’d all be holding a coffee.

The award-winning Caloundra barista lives, breathes and consumes coffee like a madman – 10 to 12 double shots a day.

Adams is so passionate about his trade, he now wants to use his success to change the lives of the world’s poorest coffee growers.

In 2015, Adams founded the Chapola Project with three other roasters to help coffee growers in developing nations improve their harvests and attract higher prices for their coffee beans.

He first visited Honduras in 2015 and fell in love with the country and the people, but realised he could do more for coffee growers in turmoil.

His most recent trip was in July and August, and after a brief stint back on the Coast, he’s now in Brazil meeting growers.

Adams and his team visit their coffee growers up to four times a year, which he says is hard on his wife and two kids, Grace, five and Jack, 18 months, particularly as he often ventures into dangerous places.

In Honduras, he visits Santa Barbara in the El Salito mountain range near the city of San Pedro Sula, known as the world’s murder capital until 2016.

“We have to be quite vigilant about where we go,” he says.

“I’m not going to walk down the main street of San Pedro Sula at twelve o’clock at night. You’re watching over your shoulder all the time.

“But one of the things I did learn on this recent trip was they’ve had a new government come into Honduras and they’ve tried hard to clean up the safety.

“The locals get offended when you talk about their reputation worldwide, with drugs and cartels and criminals. They get passionate about defending their country.

“The people are humble, genuine, down to earth and very welcoming. They’ll have you staying at their house and they class you as family. It’s amazing hospitality.

“A lot of producers in Honduras are quite poor and really struggle with general handling of money and education around their finances,” Adams says.

“A coffee producer will only get one decent harvest per year and that money is all they have to live off for the year. If they miss the opportunity for a really good pick, they lose a lot of income.”

Adams says 70 per cent of growers in Honduras sell into the local market at  low prices because they’re not recognised by international buyers as yet, and they don’t have the resources to nurture their plantations properly to produce bigger harvests.

“A lot of the high end coffee gets sold into the local market for about US$1 to US$1.50 per pound compared with the international price of US$4.50 to US$6 per pound,” he says.

“They get loans from banks or local brokers and pay high interest rates, so they don’t end up with a lot of money.

“A farmer could have a hundred trees but may only be producing 50 per cent of capacity due to nutrients lacking in the soil,” Adams says.

“If they can fertilise early in their harvest they can get a greater yield and potentially double their ouput.

But they’re in this cycle where they can’t afford fertilising, leaf rust and pesticide resistance and soil analysis, so they don’t fulfil their potential.”

Adams sources his coffee beans from Brazil, Colombia, Ethiopia, India, El Salvador, Peru and Honduras and says many coffee growers sell to the world’s biggest coffee brands at 1970s prices, as they’re afraid to charge more in case they lose the business.

His cafe, Lamkin Lane Espresso Cafe, has been listed in the top 10 coffee outlets worldwide by Beanhunter.

It’s safe to say, in the seven years since he launched Tim Adams Specialty Coffee with wife Katie, he’s reached the pinnacle of his career.

He could sit back and reap the rewards, but that’s the last thing this fast-talking, highly charged coffee connoisseur wants to do.

“I’m in a position now where I’ve done a lot of stuff locally, built a team up, I’m getting local people to drink our product, and now I want to focus on giving back to the communities we’ve been buying off for a number of years.

“We’re at a point where we can help.”

There’s another reason Adams is keen to improve conditions for Hondurans and other struggling coffee growers – he wants to tap into a growing demand for fair trade products.

“People want to know their coffee has come from providers who have ethically grown it and sourced it,” he says.

“I’m so driven by that and the thing is, I could just buy coffee from wherever I can to make a dollar, but that’s not important to me.

“By going there and seeing with my own eyes some of the conditions farmers are living in… we just take our lifestyles for granted.”

To that end, Adams donates $2 per kilo of his Chapola blend back to the farmers and $1 per kilo for his other blends.

“One day I’d like to have all my coffee purchased through the Chapola Project.

“The ideal would be to have up to 50 different coffees worldwide that have taken a producer from an average coffee grower to the high end specialty market. We have lots of work to do.”