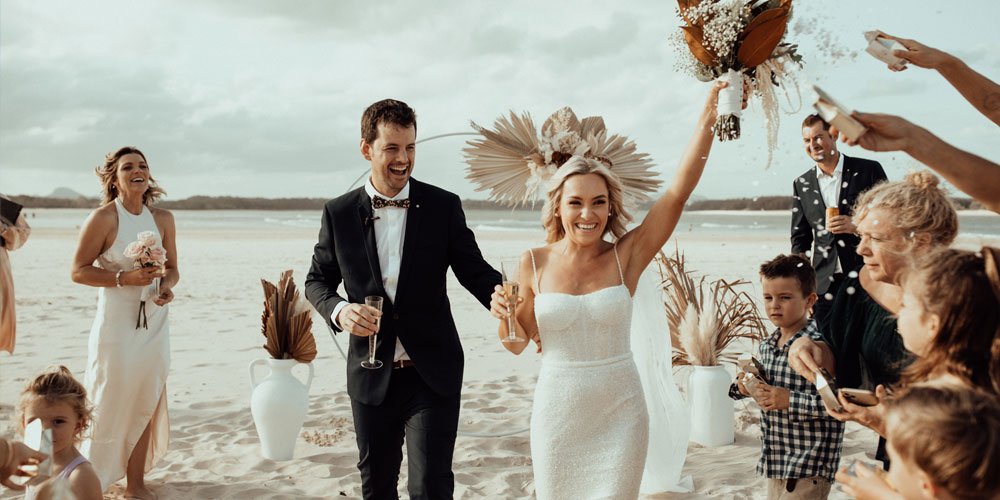 Newlyweds Matt and Courtney Paterson planned their dream wedding in less than 24 hours.

Planning a perfect wedding can be stressful, but imagine planning your entire big day in less than 24 hours. That’s exactly what a couple from Maroochydore has done.

Courtney McGuirk could not wait another day to marry the man of her dreams, her now-husband Matt Paterson, and after two cancelled wedding dates, an afternoon at the beach turned very quickly into an impromptu whirlwind to the aisle.

“We made the decision at 8pm on the Thursday and we got married the next day at 4.30pm,” the now Mrs Paterson says.

“It was one of those things where I just thought I want to marry him; I am just so in love with him, and I don’t want to cancel or wait another day.”

The newlyweds tied the knot on February 11 on the beach at Cotton Tree and Mrs Paterson says everything fell into place perfectly at such short notice.

Mr Paterson is from New Zealand, and the couple had originally booked to have their dream day there on February 12.

Due to international uncertainly, they rescheduled for an Australian wedding on February 11, but with the New Zealand borders still closed at Christmas, they made the difficult decision to cancel again.

“On the Thursday afternoon, we wandered down to Cotton Tree and were sitting on the beach and my now husband suggested we could just get married here,” Mrs Paterson says.

“That was the day we were supposed to get married and that’s why we made the decision to just do it.”

From the dress and flowers, cake and venue, celebrant and photographer, the couple and their nearest and dearest began the task of planning a perfect wedding.

“We just started contacting people and everyone was happy to make it happen. It was such a blur. We called Matt’s best friend from Rockhampton first and he said he would get in the car and get here. Then we called my sister who lives 10 hours away and she is a pilot and said she would get in her plane.

“Then we called our celebrant to see if it was possible and she stayed up till 1am writing our ceremony.

“Our celebrant had already lodged our documents six months ago because we were already planning to get married, so that was a saving grace.”

Waking up on the Friday to take the wedding dress and suit to the seamstress at 5.30am, Mrs Paterson admits she began wondering if they would be able to pull it off. But she knew so much had already happened behind the scenes overnight that they “just had to just do it”.

“The jeweller met me early at his store to pick up the wedding bands, my cakemaker got up at 5.30am to make our cake. My bridesmaids called around to all the florists and were able to organise all the flowers. I sent my sister-in-law to the shops to get my wedding shoes and my bridesmaids’ wedding shoes. We were calling shops and getting them to put things behind the counter for us.

“Everything pulled together amazingly, and we were able to get hair, makeup, the ceremony set up, absolutely everything.”

Picking up her dress at 2pm and walking down the aisle a few hours later with family from New Zealand watching via live stream, Mrs Paterson says it was the most incredible feeling.

“The most important thing for us was being together and being married. We just didn’t want to wait another day.

“We feel like it was meant to be because everything fell into place.

“We had a proper dream wedding, without missing anything, but we managed to organise it in 24 hours.”

Mr and Mrs Paterson plan to have a quite getaway to Byron Bay for their honeymoon.

Continue Reading
You may also like...
Related Topics: wedding