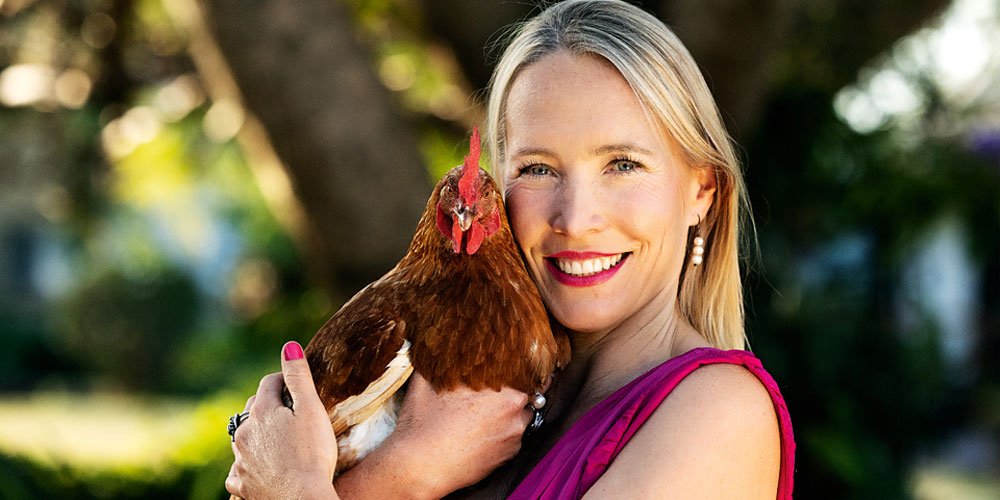 The world of Gretchen Keelty is as colourful and interesting as the huge pink hats, crazy sunglasses and bright dresses she loves to wear. The Buderim artist, who was recently named president of Sunshine Coast arts organisation Arts Connect Inc, is bursting with tales to tell, of science studies, military training, miracles in Spain, her love of chickens and of course, her passion for art of any medium.

Growing up on a farm in Palmwoods, she was an only child who ran amok on the farm with her dog and was always painting, drawing and making things. Her love of chickens began there.

“I might sound like a crazy chicken lady, but my chickens are like little feathered puppies that follow me around,” she says. “I have four: Priscilla, Esmeralda, Bertha and Mildred. They are the most gorgeous, intelligent, inquisitive little beings. Each has a very distinct personality and they are easier to train than a dog.

“They might not even realise they are chickens. They eat yoghurt with hemp for breakfast, hand-fed organic elderberries and coriander from my garden. They get lots of cuddles.”

Despite showing an early aptitude for art, Ms Keelty went on to study a Bachelor of Science at the University of Queensland, during which time she enrolled in Reserve Officer Training in the army.

“After doing military history I thought, you know what? I don’t think this is for me, mainly because of the politics. Now I have a very different view. One thing most people don’t understand about the army is it’s not all about war, it’s about resources. It’s a massive organisation that is expert at logistics; doling out resources and getting things done in a really thorough process.”

Following on from UQ, Ms Keelty studied a Bachelor of Arts with a minor in Information Systems at the University of the Sunshine Coast (USC), and a Bachelor of Business in Marketing and minor in International Business, also at USC.

Having completed three degrees, she moved to Canberra to take up a marketing job, followed by a stint at the Australian Research Council. She then moved to Sydney to study at the Julian Ashton Art School, followed by the Shillington College of Design. She completed her Masters of Fine Art Production in Valencia, Spain.

“I’d been travelling and teaching English and my friend Fernando invited me to go and live with him and paint in Spain,” she says. “I’ve had a few health issues with my heart and the cardiac specialist said ‘my prescription for you is to go and live in Spain with this really nice man, eat lots of salty food and be happy’.”

However, when Ms Keelty arrived in Spain in May 2016, her friend wasn’t there to meet her. She subsequently discovered he’d been hiking in the Pyrenees and had frozen to death.

“I was in Valencia, alone, and people kept saying, ‘why don’t you just come home?’ I thought, what to? I’m a single woman living on the Coast who doesn’t’ have children.”

She stayed for two-and-a-half  years, learning to ride a bike at the age of 37 to get around, because she felt it was too dangerous to drive on Spanish roads.

“The Unversitat Politecnica de Valencia was incredible,” she says. “It was really hard because I didn’t speak Spanish or Valencian. But I would go five days a week from when the cleaners unlocked the doors at 8am to when they closed at 10.30pm.”

Ms Keelty tells incredible tales of her time in Spain, such as clearly hearing the voice of her dead Spanish friend giving her advice – something her scientific mind questioned, but accepted – and narrowly escaping death when the building she lived in collapsed.

She will exhibit work inspired by her time in Spain at Arts Connect Inc’s Truth, Healing and Prophecy exhibition at the Old Ambulance Station in Nambour from February 4 to March 5. It’s one of many events Arts Connect organises across the Sunshine Coast each year, including Open Studios in March and Sculpture On the Edge at Spicers Tamarind, Maleny.

“President of Arts Connect is a big job,” she says. “We’ve got more than 200 members. We’re experiencing huge growth. Our members are just amazing and I really love meeting them.

“In this economy, where we all have to evolve and shift, artists have a really big role to play. I think it’s that creative mind, where you come at things from a different angle.The arts have taken a huge hit in the last two years. It’s really important to understand and value what artists bring. We are creative problem solvers.

“I really want the membership to go up and more members to actively participate. I want everyone to feel confident to grow their skills and I want to increase opportunities. I want to keep building up the network and enriching the Coast.”

Ms Keelty is also on the board of WomenKind, which helped raise $280,000 for SunnyKids and $5000 for No More Fake Smiles at the Noosa Mingle with the Mayor Ball last year.

For more information on upcoming arts events across the Sunshine Coast, visit artsconnectinc.com.au.