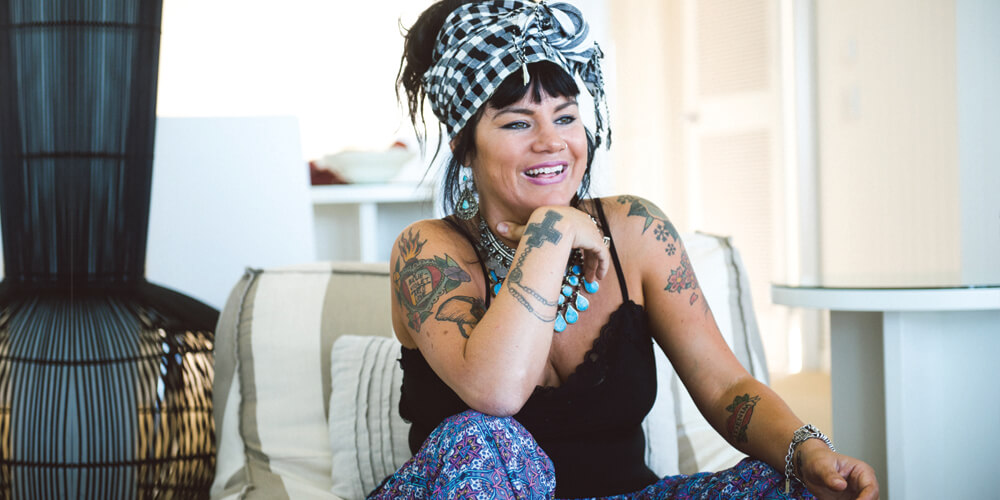 Constance Hall is sitting barefoot on a big floor cushion in her hotel room at the Novotel Twin Waters, talking at lightning speed in her husky voice, throwing F-bombs around and laughing a deep, guttural laugh. In good spirits and literally glowing, she’s happy for the world to know she’s madly in love with her new man Denim Cooke and back to doing what she does best. After a barrage of online hate and negative media prompted her to pull back from her highly personal blog earlier this year, she has returned stronger, smarter, more defiant and determined to take charge of her own story and embrace her success.

“I met this amazing PR chick who works for Sony and she toured me,” she tells MWP. “She said, ‘reclaim your right to blog about your life’. A lightbulb came on and I was like, I need to reclaim my right to blog about my life! Because I’d lost that. All of a sudden all these news outlets are writing about my life and I’m just hiding from it, going, I want to do these daily updates but I can’t do that because Denim will be in the background, or one of his kids, and everyone’s going to scrutinise us.”

She met kindred free spirit Denim (yes, it’s his real name) at a skate park in Perth in February and they now share her Margaret River home with her four kids and his two teenage sons, who she describes as beautiful, polite kids who treat her four younger children with care and kindness.

A lot of people love Hall – she counts US celebrities Ashton Kutcher and Ellen DeGeneres as fans – but a lot of people love to hate her. When news spread of her new romance, she copped a lot of flak, despite her insistence her troubled relationship with her children’s father Bill Mahon was over before she met Denim.

She puts a lot of the public criticism she receives down to tall poppy syndrome and says as much as she loves the sisterhood, there’s an “underlying cattiness in women that can’t be ignored and has to be talked about”.

“Men love to say, you women are your worst enemies. You’re such bitches. Well, we’re living in a patriarchal society and we don’t feel adequate. We feel like we’re getting squashed all the time so there’s an innate desire to step on another woman to help ourselves up. It comes from us not being appreciated; we’ve actually been turned against each other in the media. Every time you read a headline it’s, such and such flaunts her new body. But it’s not like that with blokes.

“When my blog first started going viral I thought, I will never ever diss another chick. If someone is doing something in the spotlight that I don’t agree with, I’ll just ignore it. But there was nothing I could do about the fact that I was just going to get dissed anyway. I thought OK, you just have to get thicker skin, there’s no other option because you can’t make everyone like you, you can’t remain entertaining and funny and also be likeable. Now I just accept it.

“Do you know what I do to make myself feel better? I look at other women with high profiles – like, way higher than mine – and I look at their comments sections. I look at how people talk to Amy Schumer, who’s one of my idols and the way people talk about Kim Kardashian, who I secretly just f – – king love because I think she’s so funny. I go, well, everybody just hates women who rise and that sort of gives me strength.”

She recalls some advice musician Clare Bowditch gave her and she promptly took on board: “She said, own your success. If we don’t own it, no one will ever accept it.”

Not only has Hall owned her success, she has orchestrated it and used it to help others. When she shared a post in March last year about the Kenyan-based charity, Rafiki Mwema, which runs therapeutic homes for sexually abused children, her crowdfunding campaign reached $75,000 in three hours and $200,000 in two days. Such is Hall’s power with her fiercely loyal fans, known as ‘queens’.

With her massive social media following, she was able to turn down multiple offers by major publishers for the rights to her first book, Like a Queen and self-publish. “That was one of my finer ideas,” she laughs. After selling more than 150,000 copies, not only did she set herself up financially – she makes no money from her blog and is deemed too unpredictable to be a brand ambassador – she was also able to donate $1 a book to Rafiki Mwema, bringing the total she has now raised for the charity to more than $380,000.

She’s now 16,000 words into her second book, which she says will be less of a guide and more of a revealing memoir than her first book. She’s wanted to be a writer since she was a child, so she loves the process, but is struggling to find time to bash it out in between raising her kids, doing her recent European tour, Australian speaking engagements, working on her clothing label Mum Tum and her new relationship.

“If I just get everything out there, my vulnerabilities, my insecurities, the love story, what’s happened, you give that to everyone and if they want to read it they can, if they don’t they won’t. Once I’ve been really honest with everyone and there’s no secrets, I can do my daily updates again and if you don’t like it you can f – – k off. I’m just taking a risk and just writing it and I really hope I don’t come across like f – – king Tom Cruise jumping on Oprah’s couch.”

She laughs her big belly laugh again and it’s easy to see how this charismatic, funny, insightful woman has connected with so many. She may be a little rough around the edges, but that’s what her fans love about her – what you see is what you get. In a world of unrealistic female ideals, she’s a warrior for the real.

But while she’s a total rockstar to many in the blogosphere, she’s not everyone’s cup of tea and that’s fine with her – as long as they don’t twist her words with the aim of tearing her down.

“They’re so righteous, they go, I’m going to grab that funny thing you said and I’m going to use it against you. I’ve recently started blogging again because my team is awesome and they’ve done so much work to keep my haters away from me so I don’t have to be exposed to it but I f – – king missed it, you know? I missed being able to complain about my relationship and complain about parenthood. I went through this stage of, I can’t do it anymore because I’m becoming Australia’s most hated woman. I really loved the fact I’ve just gone f – – k ‘em, I’m having a hard day and I’m going to blog about it and they’re all like, she’s back! I’m like, I just wanted to be here the whole time guys, but I felt like I couldn’t.”