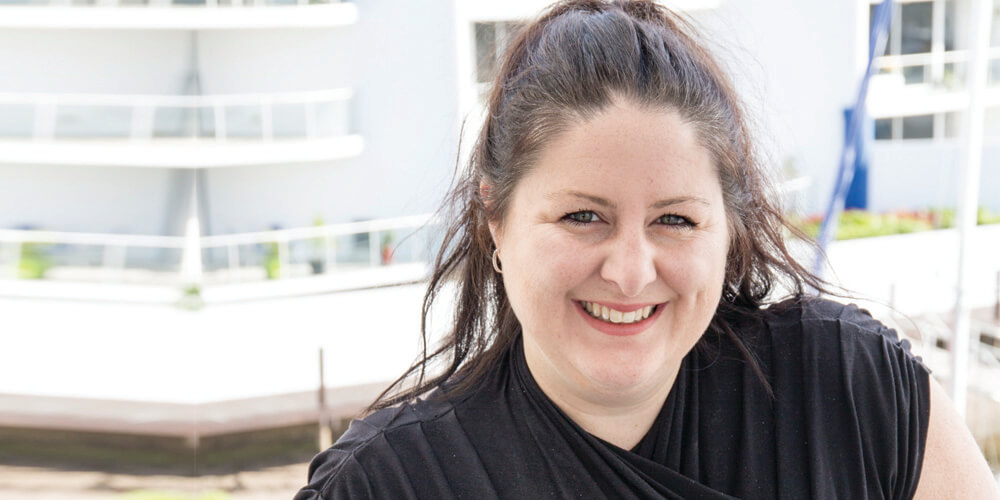 Where on the Sunshine Coast do you live? Yaroomba. It’s paradise.

First job? A promotions role at Mix FM, driving the Coast Cruiser. It was the job of a lifetime for a 17-year-old with a head full of dreams and a new driver’s licence.

What are you currently working on? A design for a new home build on Kawana Island. It is a large architectural home for a gorgeous family with six lively kids.

First car? A 1984 white Volvo station wagon with shagpile seat covers and a dated paint job patched up with homemade flowers cut out of contact. It was the only car in our house with the roof racks dad needed to go surfing. He got some looks.

Favourite book? I’d probably say Z for Zachariah by Robert C O’Brien. I read it in year 11 and have read it over and over again since. I have no idea why I like it so much, but if you haven’t read it, do. It won’t take long; it’s only 196 pages.

What are you reading now? Takedown Twenty by Janet Evanovich. I’m a few behind. I’ve been busy. Stacked under this is the other unread Janet Evanovich titles in the series, two Harlan Coben books and a Lee Child (for when I feel like reading in short, choppy sentences, which is often).

Favourite song? Can I have two? Hands Down by Dashboard Confessional (I walked down the aisle to that song) and Logo Te Pate from the Moana soundtrack. I’m the embarrassing mum.

Best day in your life? You’re expecting me to say my wedding day, or the day each of my kids was born, so I won’t. Even though they were all amazing days that I’d love to do over. Probably the day I moved into my first home on my own. I was 17 and had built my first home at Currimundi. It quickly turned into the worst day of my life when some so-called friends flooded it at the house warming. You live and learn.

Best advice you’ve been given? I have a handwritten note on my noticeboard at work, written by my grandfather only two weeks before his death in May 2006 that says, ‘Indecision causes more emotional stress than making the wrong decision.’ I love it.

What is your favourite place on the Sunshine Coast? Marcoola Beach. It’s my favourite because it isn’t crowded and the sand seems cleaner.

Where do you take visitors when they come to the Coast? The Spirit House, Yandina and to the top of Mount Coolum.

If you could change one thing on the Coast what would it be? I’d fix the traffic between here and Brisbane. Any commuter would understand my pain, and I only have to do it once or twice a week.

Your greatest regret? Not spending more time picking my grandfather’s brain while I had the chance.

What achievement are you most proud of? The rubber band ball on my office desk. And my kids.

You are happiest when? I’m at home on Saturday morning, sitting on our deck with a coffee, and the kids are happy. It’s a much briefer moment during soccer season.

What frustrates you the most? People who don’t take pride in what they do.

How do you deal with your frustrations? I listen to music, loudly.

If you could tell your 18-year-old self anything, what would it be? Realise how happy and beautiful you are. Don’t waste one second of time hoping for more. At that age, I had everything I could have wanted. I still do, but am lucky enough to realise it now.

Continue Reading
You may also like...
Related Topics: Profile