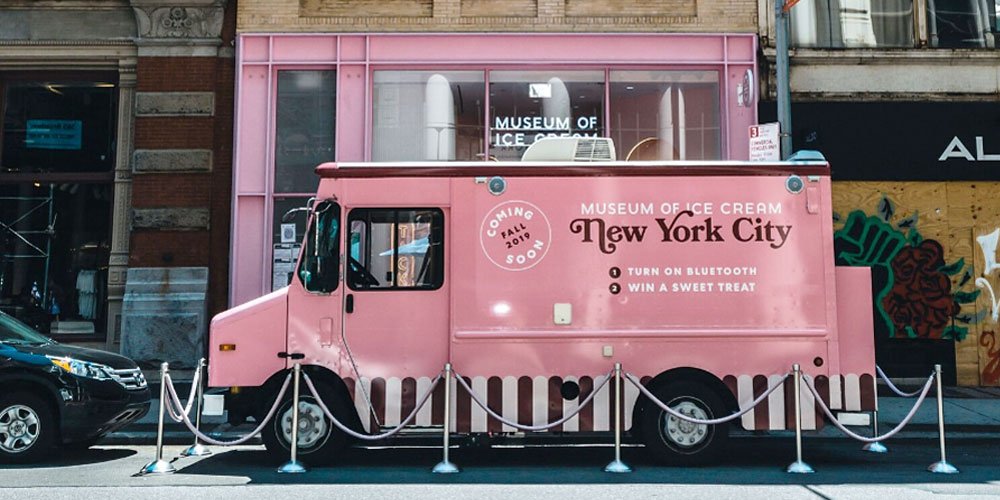 Landing an exciting job in New York City is the dream of many intrepid Aussies – after all, if you can make it there, you’ll make it anywhere. But Sunshine Coast designer Lilli Collingwood didn’t entertain any such grand notions until a serendipitous event led to her moving to Brooklyn to take up a job at what must be one of the coolest places for a designer to work – the Museum of Ice Cream.

Ms Collingwood grew up in Palmwoods and graduated as art dux at Suncoast Christian College in 2015. She went on to complete a Bachelor of Design and Communication at the University of the Sunshine Coast in 2018 and after an internship in Brisbane, took off to New Zealand for a well-earned break.

“I was super exhausted and wanted to do something to celebrate finishing my degree,” she says. “I met a stranger at a bus stop in this small little town and we got chatting. I told him I was a designer and he said his daughter had moved to New York to work for a place called the Museum of Ice Cream. I thought he was messing with me. I got home and Googled it and it was real. I went to the careers page and they had a graphic design internship going, so I applied. I didn’t think I had a shot at all.”

As fate would have it, Ms Collingwood landed the job and found herself alone in New York at 21. It was a long way from the cruisy lifestyle she was used to back home.

“The first three months was crazy,” she says. “Coming from the Sunshine Coast, everyone’s chill, you’ve got a car, it’s very comfortable living. I was thrown into the hustle and bustle of the city, people weren’t as friendly and chatty. It was definitely hard the first couple of months and I was pretty homesick, but once I found my groove and got settled at work, I was more comfortable. At first I thought it was going to be a short-term stint and I didn’t see myself here for long.”

After a three-month internship, Ms Collingwood was offered a full-time position and 18 months later, she’s the museum’s lead graphic designer on the marketing team and is loving New York life.

“I do graphic design for social media, email marketing, I do a lot of marketing and copywriting,” she says. “My main thing is design, all the stuff on Instagram, Mailchimp, Square Space, digital campaigns. They’re always doing new campaigns, especially now with the current state of the world, a lot of things are going virtual. Every month we’re trying to push out new initiatives to keep it fresh and keep pushing the brand forward. New things are always needing to be pumped out.”

Ms Collingwood has a special talent for creating GIPHY stickers and was thrilled when last year, celebrity Kim Kardashian reposted one of her stickers on Instagram.

The Museum, which started several years ago as a pop-up business, has bases in New York and San Francisco. It has interactive environments and sensory experiences inspiring human connection through the universal power of ice-cream.

“Everything is bright pink, there are lots of Insta-worthy photos, a sprinkle pool, architectural pieces – it’s definitely not your traditional museum,” Ms Collingwood says.

The COVID pandemic was looming when she came home to visit family and friends on the Sunshine Coast in February, and she had to make the difficult decision about whether to return or play it safe and stay here on the Coast.

“It was crazy because they laid a whole heap of people off at the start of COVID and it was definitely very scary, because when you lose your job here, your health care is gone,” she says. “My parents were definitely worried about me. We were in lockdown and I kind of just stuck it out. I just had to make a decision because if I left, I would have lost my working visa.

“COVID was taking out the city and it was definitely uncomfortable, but I have a lot of Australian friends here and we were all kind of in the same boat, sticking it out together. That definitely helped during that time, that we were so far away from home dealing with the same things.”

After having closed due to COVID, the museum recently re-opened and it’s business as usual. Ms Collingwood has no plans to return to Australia now she’s riding a wave of success in the Big Apple.

“The reason I love it so much now is I’ve met so many great people,” she says. “The city is very dirty and not as glamorous as the movies paint it, but the people I’ve met here have been super inspiring. New York is full of creative people.

“At first I was shocked by the go-go-go 24/7 work culture they have here, but I think I’m used to it now. When I went back to the Sunshine Coast in February, I went wow, it’s so slow. I found myself getting bored. It’s very exciting here because there’s always something going on and always something to do. I’m never bored and I kind of do like the fast pace now.”

She does admit to missing the Sunny Coast beaches and weather and says New York winters are the longest she’s ever experienced. “I miss my family, my dogs, the beach and the warm weather, but I feel like I’ll stay here a few more years yet. I just really love it and I have so many opportunities here.”