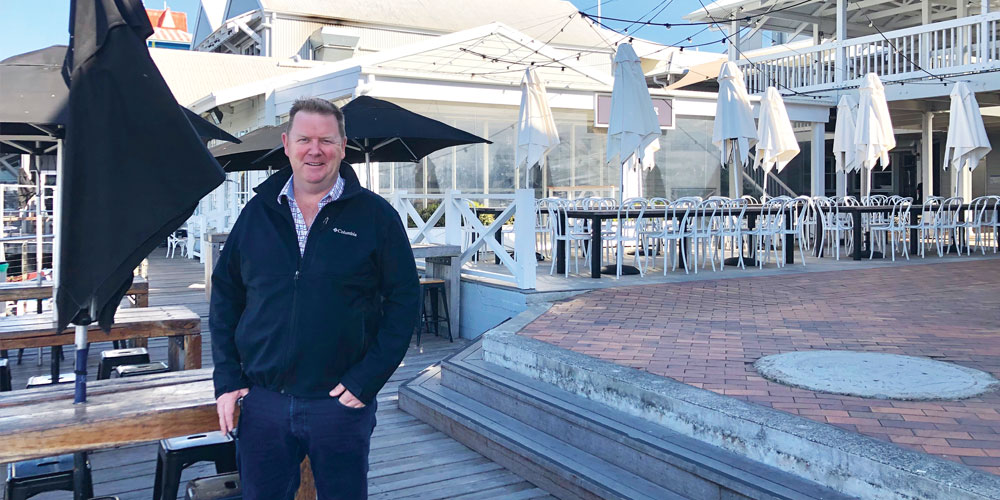 Dirk Long wasn’t always going to be a property developer. As a young man growing up on a sheep and cattle farm near Texas on the border of Queensland and New South Wales, his one and only dream was farming. Now, as the co-owner of Evans Long, the company behind the redevelopment of The Wharf Mooloolaba, he reflects on the moment that changed everything.

“Farming is all I wanted to do growing up,” he says. “I left school and went jackarooing out at Longreach, but my father wouldn’t let me go unless I was enrolled in a uni degree, so I did property evaluation, now called property economics. Without a hell of a lot of knowledge about that course, I just did it to keep Dad happy. Off I went to Gatton [University of Queensland campus] and that’s how I got into the property industry.

“If I hadn’t gone off and done that, I would have ended up in the rural industry. I think it’s in your blood. I love my links to the bush and I still have a lot of friends out there.”

Mr Long grew up holidaying on the Sunshine Coast with his family and moved here from Brisbane eight years ago with his wife Sascha and three children.

“You always fall in love with the place you holiday at and it has always been a dream to live on the Sunshine Coast,” he says. “The Coast was a bit like a country town on the water when I used to come up here as a kid. We used to stay at Parkyn Parade in Mooloolaba and the wharf was undeveloped. There was just a set of tennis courts there.”

Mr Long and his family recently moved to Buderim to be closer to the kids’ school, leaving behind a 25-acre property in Eudlo. Both country people, he and his wife wanted their kids to experience what they love about being close to nature, without missing out on the benefits of urban living.

“As the kids are getting older they want to be in the surf or playing sport and now they’ve got the best of both worlds.”

Evans Long, the company Mr Long owns with his mate Matthew Evans, develops a variety of commercial property from medical centres and retail developments, to service stations and industrial developments. They’ve recently started construction on Foundation Place, the first occupants of the Maroochydore CBD, and are thrilled with how the redevelopment of The Wharf has come along.

“We got involved with The Wharf in February 2016,” Mr Long says. “We owned it for 12 months before we did anything. We got around, listened, had a good look. The overarching thing was to bring back what we had. The bones of what was there was sound, so it was just a matter of reinventing it. It had become very tired and it needed a refresher to bring something far more relevant to today’s expectations from consumers.

“We wanted local businesses in there, we didn’t want the national brands and we didn’t ever go out chasing them,” he says. “We wanted hands-on owner-operators who were passionate about their businesses and we’ve achieved that. \Businesses can’t survive on the holiday seasons. It’s got to be 365 days a year and it has to appeal to the locals. The Sunshine Coast has always had that idea that we don’t want to become a glitter strip and what we’ve got there now is a bit more down-to-earth and in line with Mooloolaba, but with the standards we expect today. We wanted something different, something adventurous and I think we’ve created that.

“Matt and I always had a vision that as a family, you could sit in the courtyard and if one of the kids wanted calamari, they could grab it, if someone wanted a burger or a pizza, they could grab it. It’s very relaxed. The feedback from the locals and the customers has been overwhelmingly supportive. We get stopped all the time down there by people thanking us for bringing The Wharf back. It’s really rewarding.”

Mr Long has come a long way from his farming days and loves the fact that while he’s a busy guy, he’s found a lifestyle here he doubts he could have achieved on the land.

“A lot of my mates are doing it tough down there,” he says. “I don’t think my Dad saw me play a game of footy, he was always on the farm. They’re wedded to those farms. I think at the end of the day, that’s why I’m doing what I’m doing. I saw the commitment you have to have to make a living in the rural industry and I don’t want to miss seeing my kids playing a footy game or a netball game. We’re settled on the Sunshine Coast and my wife and I see ourselves here for the long haul.”

Continue Reading
You may also like...
Related Topics: Mooloolaba, The Wharf