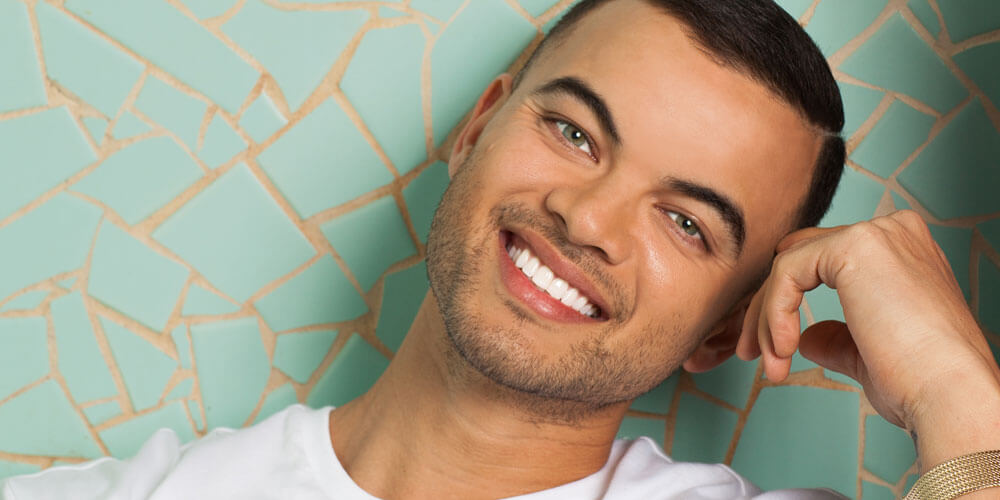 It’s a very cheerful and warm Guy Sebastian who greets  me over the phone from the other side of the world. He  is writing his next album with Los Angeles talents and it’s clear the Australian star is in his element.

The Malaysian-born, Adelaide-raised singer first came to our attention as a contestant of the first season of Australia Idol in 2003.

Sporting an impressive afro, the young talent went on to win the series and has become a successful staple of the music industry with more than 40 platinum-certified releases and more than three million sales to date.

He broke into the highly competitive American industry with the platinum hit Battle Scars, a duet with rapper Lupe Fiasco, in 2012 and has explored all kinds of musical genres  in his eight studio albums, from the gospel of his roots to traditional pop, R&B and electro.

He began singing at age 14 and went on to become the only Australian male artist to ever achieve six number one singles and two number one albums in chart history.

He also gained global recognition as our country’s representative in the 60th Eurovision competition in 2015. It’s a career to be proud of, that’s for sure.

Speaking with My Weekly Preview before his Then and Now tour brings him to the Sunshine Coast, Mr Sebastian says he is “more in love” with music now than ever before.

“I feel like now’s the time to make that statement album,” he says.

“My writing has really matured and my strike rate is so much better. There were trips where I’d write 10 songs and only like one or two of them.

“Now, I don’t even bother writing down an idea that doesn’t feel special.

“Earworms are a real thing for artists too and when you are writing a song, you know you have a good one when the melodies are floating around in your head for days after.

“The difficulty is creating that perfect blend of earworm and lyrical content that has a fresh perspective and is relevant. People think pop music is easy, but it’s really hard.”

The 36-year-old says pursuing an active lifestyle has opened his mindset and has sharpened his writing skills.

“My creativity has opened up so much since I started getting  fit. Every morning while I’ve been in LA, I run up the famous Runyon Canyon.

“It’s like a ritual. You are so high by the time you reach the top, I can look out over LA and open myself up to the possibilities of the day.

“To have a personal victory like that so early in the day makes me feel like I can tackle anything on  a creative level and it helps me a lot.

“When I get home, I hit up my trainer. It’s not a good training session unless you are almost on the brink of being sick.”

Mr Sebastian admits being away from his sons Hudson and Archer is the hardest part of being an in-demand performer, and with his eldest now in school, they cannot travel on the road as a family with his wife Jules like they used to.

“The last regional tour that came to the Sunshine Coast,  the Get Along tour, we did 50-something shows around the regional areas and I took my boys with me,” he says.

“We had  a massive mobile home that my family and I travelled in and it was easy to do that at the time because we had a toddler and a baby. But Huddy’s six now and his brother is four, so they are locked into their schedule.”

Mr Sebastian credits his children for positively influencing him in all aspects of his life.

“Before kids, you are living for yourself and all that matters is you and your partner. Your priorities shift when you have kids; it becomes about them  and everything you do centres around them,” he says.

“[Being a dad] has made me a way better worker. I am more focused – I have written four songs in the last two days and it’s all because I’m hanging to get back to see them again.

“Travel comes in waves with the album-making cycle, so there is a bit more travel at the moment and then when I record, I do a lot of it in my home office studio in Surry Hills in Sydney, so I can see my kids, family and friends heaps. When  I tour Europe or the UK, which I did recently, it is really testing to be on the other side of the world.”

As much as he loves to go fishing, swim in the ocean and play music with his sons, Mr Sebastian says there is also a deep part of him that yearns for touring life and the interaction with his fans, and he can’t wait for his upcoming visit to the Coast.

“This tour will see me playing songs from the past 15 years. I’ve released a lot over that time. The audience will also get a sneak preview at the latest stuff I’m working on now,” he says.

“These people are absolute beast singers and it will be really soulful and quite organic.

“This is not such a commanding production; it will have more of a small pub vibe, where everyone can sing along and get into it and let themselves go a bit.”

After the release of his next album, which is yet to be titled, Mr Sebastian says he hopes to “test some other waters” internationally to expand the reach of his music.

“My last production went a little bit more electronic, so I want to focus on getting back to big songs that are from the heart and have soul. I love pop and big ballads with soulful tunes,” he says.

Guy Sebastian is at the Lake Kawana Community  Centre on July 7. Tickets are available now at scvenuesandevents.com.au.