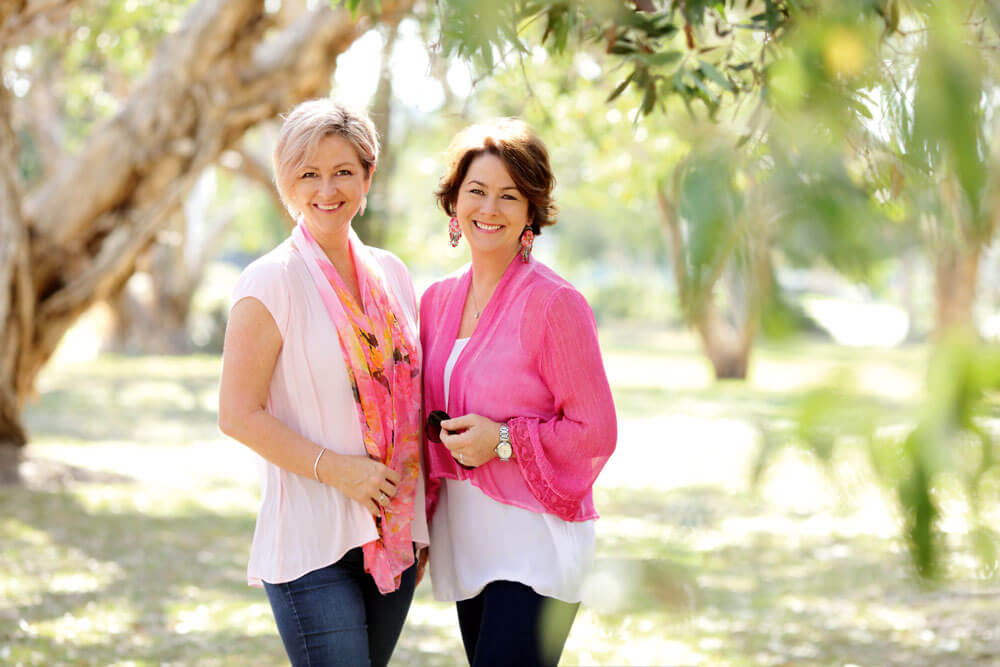 Their family seemed particularly prone to cancer – their mother died of pancreatic cancer in her fifties. Their older sister Tania – who sadly died in a car accident along with her unborn baby – had a rare tumour on her kidney when she was young.

Younger sister Justine fought aggressive breast cancer in 2013 and Loren and Karen have also fought the disease. Loren was also diagnosed with an aggressive melanoma.

“When we tested positive for the BRCA2 gene mutation it was really scary, but it made a whole lot of sense,” Loren says.

In 1994, Loren was 27 years old and 20 weeks pregnant with her daughter when she found a lump in her breast. She went to the doctor three times over a period of two months but was told her not to worry, as she was ‘too young’ to get breast cancer.

“Mum had pancreatic cancer at the time and was in her early fifties,” she says.

“It was Mum who kept saying, go back. I went to the Wesley in Brisbane and they diagnosed quite aggressive cancer.

I was in surgery that night because it had gone so long.”

Surgeons removed all the lymph nodes and a third of Loren’s left breast, and started her on three months of chemotherapy.

Her daughter Estelle was born at 28 weeks, and was hospitalised for three months. (Today, Estelle is a healthy 23-year-old.)

“I’ve also got a son Sam, who is 27. I breastfed him, did all the right things, never smoked, was fit as a fiddle, was never a big partygoer.

“I was just the most unlikely person to get cancer.”

In 2002, Loren’s cancer came back in both breasts and she had a double mastectomy.

Karen decided to have her ovaries removed as a preventative measure in 2009 and began investigating a double mastectomy, but put it off due to her busy life as a working single mum of two children.

“I’d been having 12-monthly screenings, alternating MRIs and mammograms and they did pick up a suspicious lump earlier this year that turned out to be breast cancer,” Karen says.

“It was detected with a mammogram and ultrasound but for a couple of months, my hand kept going to that spot.

“It wasn’t a lump but I just had an intuitive feeling that something wasn’t right.”

Karen’s surgeon, Lisa Creighton, advised her to have a double mastectomy, which she had in March this year. Fortunately, the cancer hadn’t spread to the lymph nodes.

“However, we’re all still here.

“Be diligent, be healthy and don’t put your head in the sand,” warns Loren.

“If I’d stuck my head in the sand when I was 27, I wouldn’t have made it to 30. It’s quite scary to face the facts, but facing the facts means you have a good chance.”

Both say they are grateful for the care they received during their darkest moments and are big supporters of Sunshine Coast charity Bloomhill Cancer Care, among others.

Loren runs the Next Property Group Bloomhill Charity Auction and has raised more than $100,000 in two years.

This year’s auction will be held at Gary Crick Automotive in Maroochydore on October 27.