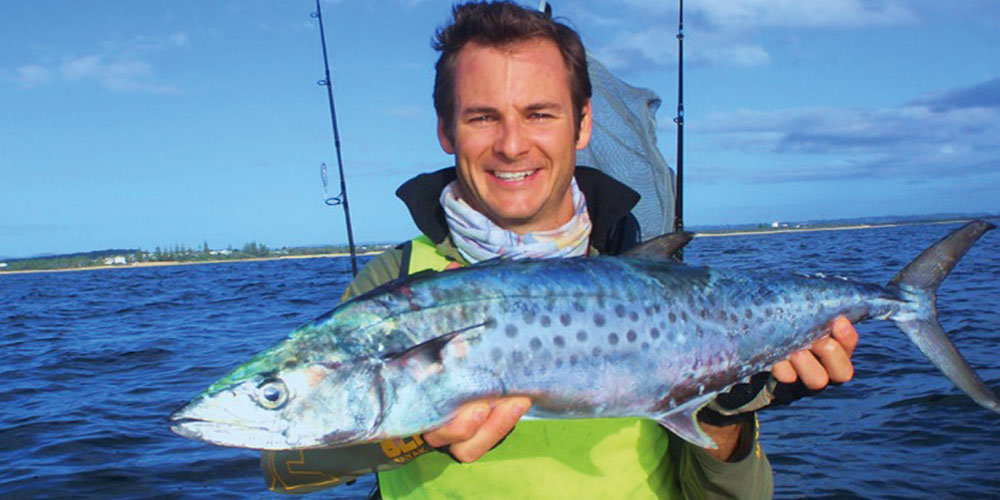 Sunshine Coast fisherman Kyle Roberts gained national media attention when he had a close encounter with a tiger shark while kayak fishing one kilometre off Moffat Beach on November 15.

The incident came after a number of incidents in Airlie Beach prompted authorities to call for a shark cull, but Mr Roberts is calling for common sense to prevail.

A radiographer/sonographer who works at a local practice, he favours respect for marine creatures over knee-jerk reactions.

“Ocean safety and being prepared is the responsibility of anyone who enters the ocean, whether it be swimming, surfing, fishing or boating,” he says. “We need to be aware that all of us share the Coast’s beaches, estuaries, rivers and ocean with marine life and animals including jellyfish, stingrays, stonefish and sharks can be encountered.

“Destruction of marine animals is an unacceptable means of mitigation and control. Information, education and understanding is the only way forward as interactions between people and marine life become more common with the growth of our region.”

A third generation fisherman, Mr Roberts grew up on the Capricorn Coast and has been offshore kayak fishing for seven years.  When he launched solo from Moffat Beach in his Hobie Revolution 13 kayak, it was his 78th trip.

“I trolled two pilchards targeting mackerel from the Moffat Beach shark buoys and caught a small hammerhead shark and released it. Prior to use, all baits were individually stored in a sealed watertight plastic container with no burley ever used.

“I reset the troll lines and kept cruising for 15 minutes. With no prior warning, I got hit hard from the right side of the kayak, which displaced it to the left, rolled it over and threw me into the water a couple of metres away from the kayak.

“I swam back to the kayak with it still on its side, grabbed on and looked over it to the underside to see a tiger shark still attached, crunching the plastic. I estimated its length at four metres, which was later confirmed by a 47-centimetre bite circumference. It stayed attached for another few seconds with me on one side of the kayak and it on the other. It then rolled off to its right and brushed past my legs with its body and tail.

“Once the shark was detached, it allowed the kayak to capsize and I climbed onto the underside of the capsized kayak and got my arms and legs out of the water. I then barrel rolled the kayak the right way up and sat back in the seat as the kayak started to fill with water and sink from the bite holes.”

He grabbed his waterproof radio and climbed to the nose of the kayak.

“The kayak then sank quickly to a 45-degree angle under the water, coming to rest with the front hatch and nose still clear of the water.”

Mr Roberts made a VHF call on Channel 9, making contact with another kayaker, Josh Ball. He then changed to Channel 16, the emergency channel, and made contact with the Caloundra Coast Guard.

“As I waited for rescue, I looked down through the water and could see fish circling below but couldn’t see the tiger shark.”

Contrary to media reports, the tiger shark did not circle him.

He waited 30 minutes, shaking due to shock. The first radio confirmation of visual sighting came from lifesaver Jacob Thomson on top of Moffat Headland with binoculars. The first physical contact came from Josh Ball, followed seconds later by lifesaver Graham Sharry. He was followed closely by lifesaver Nathan Steer, both on jet skis, with Dave McLean coordinating deployment of the rescue helicopter if required. By lunchtime, the water police had retrieved the kayak.

“Upon reflection, I feel the shark most likely mistook the silhouette of my kayak for a whale calf, given the whales’ recent migration past the coast,” Mr Roberts says. “After the shark had let go, it displayed no further interest, but I also made a conscious effort to minimise any splashing and unnecessary movement after the initial contact in an effort not to reinterest the shark.”

Mr Roberts, who has a wife and two young children, has every intention to return to offshore kayak fishing. “My wife understands that fishing is a big part of my life and being a fisherman is ingrained in who I am.”

Despite this, Mr Roberts is fully aware of the potential danger he was in.

“I will be forever grateful to the Caloundra Coastguard radio operator for the rescue coordination and the Kings Beach lifesavers Graham Sharry, Nathan Steer, Jacob Thomson, Dave McLean and fellow kayaker Josh Ball, who all disregarded their own safety and came to my aid knowing a large shark could still be in the area.”