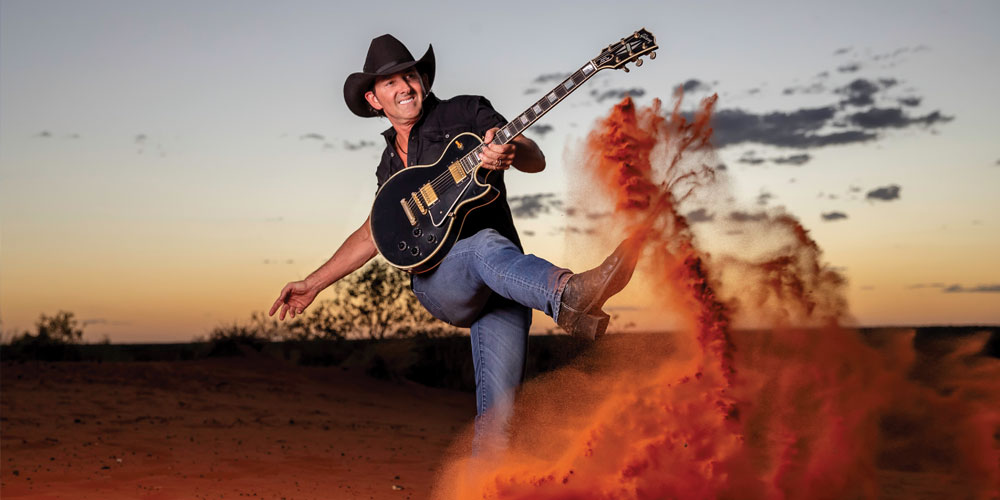 Lee Kernaghan is an Australian country music legend and one of the most recognisable names in the music industry, but who knew he got his start on the Sunshine Coast?

Speaking with My Weekly Preview during his epic Backroad Nation tour, the musician dropped this surprising statement.

“My professional career pretty well started on the Sunshine Coast,” he says. “I was on tour with my dad and I would have been about 17 years old. His tour finished and we were staying at a caravan park in Nambour. It dawned on me I had to go out and get a job, so I started knocking on doors around Mooloolaba and Caloundra, playing in restaurants and pubs.”

The only way was up from there, with Mr Kernaghan going on to win four ARIA awards, sell more than two million albums and have 33 number one hits on the Australian country music charts. But it’s a career he pretty much fell into.

“I wasn’t good at anything else, so it had to be music,” he says. “I won the Star Maker Award at Tamworth when I was 17, but it wasn’t until I was 27 that I got to make my first album, The Outback Club. That was the one that won the ARIA.

“Country was in my DNA,” he says. “My mum’s parents were dairy farmers up in the high country. Dad came from a long line of drovers. You combine that with hearing Slim Dusty live at Wagga Wagga on constant repeat at our place when I was about four, and I wasn’t going to go any other way.

Mr Kernaghan has seen the country music industry in Australia evolve a lot since he first started out, but he’s retained his fan base during that time.

“The age demographic of people who come to my shows is everything from three to 93 and maybe older,” he says. “What I’ve seen is young kids who were coming along to my shows out at college somewhere, they’ve gone on to have kids of their own and now I’m seeing second- and third-generation fans coming through.”

Mr Kernaghan’s love of the country, the lifestyle that goes along with it and his passion for country music has always been strong in his music and is what makes him appealing to a broad fan base, which has become even broader since country music has become increasingly more mainstream.

“Country music is just sounding so good now,” he says. “It has really come on strong and people are really connecting with it. I do a radio show on Triple M every week and it goes out to 80 stations on a network not really known to play country music and people are loving it.

“The music just keeps evolving and I reckon it’s just getting better and better. It’s the most exciting time in country music. People are getting into it with sold-out events like CMC Rocks, the Deni Ute Muster and the Gympie Muster. They’re all iconic events.

“The success of artists like Keith Urban and then with Bebe Rexha’s country crossover hit and Billy Ray Cyrus’ smash hit teaming up with Lil Nas X – country is really breaking through into mainstream media, as it has been doing in America for years. There are more country music stations in America than any other format. It’s massive there.”

While the US is the hub of country music, Mr Kernaghan has stayed true to his Aussie roots, earning him 37 Golden Guitars at the Tamworth music festival for music that is about Australia, for Australians.

“My kinda country is homegrown,” he says. “It’s about us. Our way of life. For me, that’s what makes it real, what makes it authentic. That’s why I’m so passionate about what I do.”

His much-anticipated 15th studio album, Backroad Nation, was written with a specific purpose in mind.

“There have been some hard times out there on the land and there still is in many parts, with the drought. I wanted to bring out a collection of songs that would make people feel good, that would give them a lift. That was the philosophy behind this album. People are getting the good vibrations all around the country right now.

“Every time I get out on stage it feels like home to me. The people who come along are like my family.”