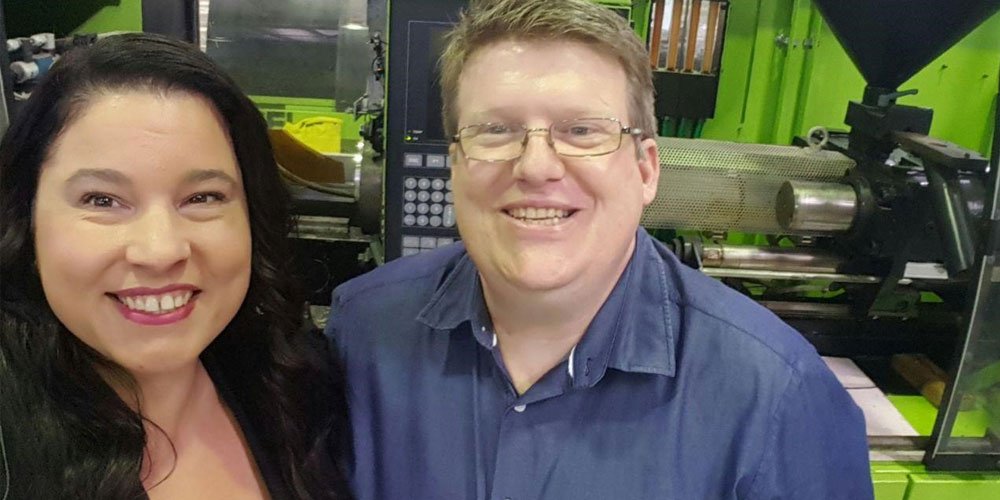 Forest Glen tech entrepreneur Amy-Rose Goodey recently made headlines for her work on a futuristic headset designed to enhance life for people with ADHD and autism. Ms Goodey and Casey Pfluger, founder of Brisbane’s Cortex Brain Technologies, were prominent contenders in the 2020 Bionics Queensland Challenge. While they didn’t progress to the finals, their device attracted a great deal of media attention and as a startup, they are hoping the exposure will attract the funding they need to progress.

The Cortex BCI Headset is a neurofeedback headset that interacts with a user’s brainwaves in a similar fashion to an MRI, but without the need for powerful electromagnets. It is a brain-training device that is designed to be inexpensive and be used at home for adults or children with a variety of neurological disorders to help transform undesirable brainwave activity into healthy activity.

“The Bionics Queensland Challenge was originally developed to help identify bionic innovation in the state and then share those innovations across the country,” Ms Goodey says.

“Participating in the Challenge gave us the opportunity to talk with leaders, mentors and people who have achieved great things in the medical technology industry. It was quite a pivotal moment for us. We are now in conversations with angel investors and we’re taking time to work on pitching to them.

“We really need investors and also people who want to be involved, because we are going to need to trial this product.”

Mr Pfluger and his daughter both have ADHD and autism and his desire to find a neurofeedback therapy he could use with ease at home prompted his research into the headset, and Ms Goodey came on board to help push things forward.

A forward-thinking educator, researcher and innovator, Ms Goodey is involved in a variety of projects, all with the common theme of harnessing technology for the betterment of humankind.

“I’ve always wanted to help people and I’ve always loved technology,” she says. “I’m very aware that technology can be used for both good and evil. I like to be involved in ethical and human-centred projects, and the headset is that.”

Ms Goodey is the membership manager of Blockchain Australia, the industry representative of the blockchain industry, a busy role she juggles with raising two young children.

Ms Goodey was drawn to blockchain due to its capacity to enable decentralised currencies such as cryptocurrencies that operate outside the purview of banks, and came to prominence in the industry through her sci-fi podcast, Widdershins, which attracts about one thousand downloads per episode.

“It’s a bit out of the box,” she says. “I take sci-fi themes from books I read and technologies from within those books, then I go to scientists and engineers who are developing the technology you read about in books. It’s mindblowing. For example, time travel is going to be possible. People say going forward is going to be easy, but going back in time will be the hard thing. I’ve converted my spare room into a podcast studio and I create it from there.”

Ms Goodey also helps facilitate a greater understanding of future technologies here on the Sunshine Coast through organising the monthly Sunshine Coast Technology Meetup. Usually hosted at the Innovation Centre, it has been operating online during COVID.

“I’ve been organising the Sunshine Coast Technology Meetup since January 2019,” she says. “I’ve always been really passionate about emerging technologies and I wanted to make them accessible and easy to understand for people. We need people to become more involved in technology. We’re all going to live it and breathe it moving forward.”

Ms Goodey is a qualified building designer and when she realised her job would one day become redundant due to digital disruption, she began to take an interest in other jobs facing a similar fate. To that end, she recently completed a postgraduate course in career counselling with the aim of helping people who are going to find themselves having to move into new careers in future. “I want to work with people on an individual level to help them move into the future of work,” she says. “There’s a lot of fear around it and I want to dispel those fears.”

Continue Reading
You may also like...
Related Topics: ADHD, Autism