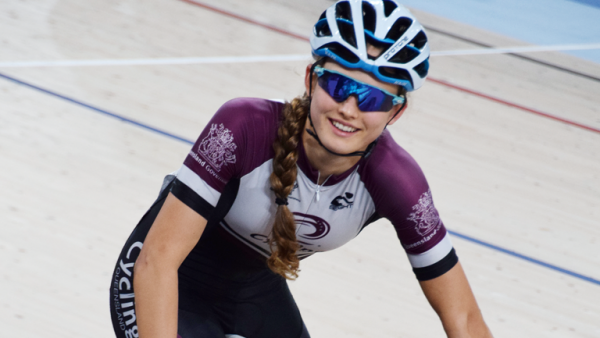 While most Year 12 students are buckling down for the business end of their school years, Buderim cyclist Alexandra Martin-Wallace is preparing to head to Italy for six weeks to compete in the UCI Junior Cycling World Championships from August 23 to 27.

The 17-year-old Year 12 Matthew Flinders Anglican College student broke the national record in March for the 2000-metre pursuit at the Cycling Australia Track National Championships in Brisbane, putting her on the radar for the Tokyo Olympics (she’s too young for next year’s Commonwealth Games).

With the world record at 2.22 and the Australian record having been 2.26, Alex came in at 2.24, becoming a new Australian champion with a promising future.

“It’s really exciting, it’s my first time going overseas for cycling,” Alex says of her trip to Italy. “There are 15 junior athletes going with the Australian team and my aim is to go well in the 2K pursuit – that’s what I train for.”

While track cyclists are known to push and shove their opponents on the velodrome, it’s not this young champion’s style.

“It can be really aggressive and you have to watch and make sure you have good positioning to be able to stay up the front and not crash,” Alex says. “A lot of people head butt, elbow or start pushing each other. They’ll fight to get into a certain position they want on the track. It can be really argy bargy, so it can be quite dangerous. As long as there’s no crashes and nothing bad happens, people usually get away with it. It happens often in bunches while we’re racing; if someone starts pushing me around, I’m not going to budge for them, but I don’t try and cause crashes.”

Alex’s mum Tess says her daughter is level-headed but not hell-bent on success at all costs: “She’s a very clean rider – she definitely doesn’t step on people to get where she wants. She doesn’t nudge, doesn’t push, doesn’t use any tactics in racing to try and get the right manoeuvre. It’s unusual in track racing.”

Alex started out doing triathlons at 10, but cycling quickly became her main passion.

“For one, I really liked the cycling community,” she says. “When I was younger, I did it a lot for fun – I wasn’t one of the best. But then I wanted to go really well and had the aim to compete at the Olympics and

Commonwealth Games. Cycling is really hard but it’s also tactical and you have to think. I just love the feeling of riding and going as fast as I can.”

Alex trains for 20 hours a week, with road or track rides and/or gym workouts every day – she often leaves for rides at 4am before school. It’s a lot to fit in, along with studying Year 12. She plans to study engineering at university next year so taking time out at a crucial point of her studies is risky.

“This is term three and she’s away for six weeks, but she manages her time well and she tries to study while she’s away. I’m sure she’ll be all right. She got her OP prediction yesterday and it’s really good.”
“It can be pretty hard to balance it all,” says Alex. “It’s a lot of time off school but I’m trying to get the study done, which is really tricky.”

While she doesn’t have time for much of a social life outside school and cycling, she does manage to play cello in the school band and orchestra and like any teenager, loves going to the beach.
Unfortunately, it looks like Alex will miss out on competing at the Commonwealth Games, even though she raced against elite open cyclists at the International Track Series in Melbourne last week and won a couple of races despite being a junior and having fewer gears than her older competitors.

“In cycling, you can’t represent your country until you’re 20 at the very youngest, and they prefer you to be older,” says Tess. “You can’t race on open gears until you are 19. It’s an international rule; young kids are locked out of big gears and have to learn to spin really fast and every two years they gain an extra couple of gears until they reach 19. This preserves their hips. They also can’t use carbon bikes or fancy wheels”.

As a junior athlete, Alex has to fund her sporting career and recently received a grant of $2500 as a runner-up in the Colonial First State Sports Boost bursary, however the fee to attend the World Championships is much more and she has created a Go Fund Me Page to help her get to the velodrome in Italy to compete. If her racing to date is anything to go by, it will be a stellar performance.