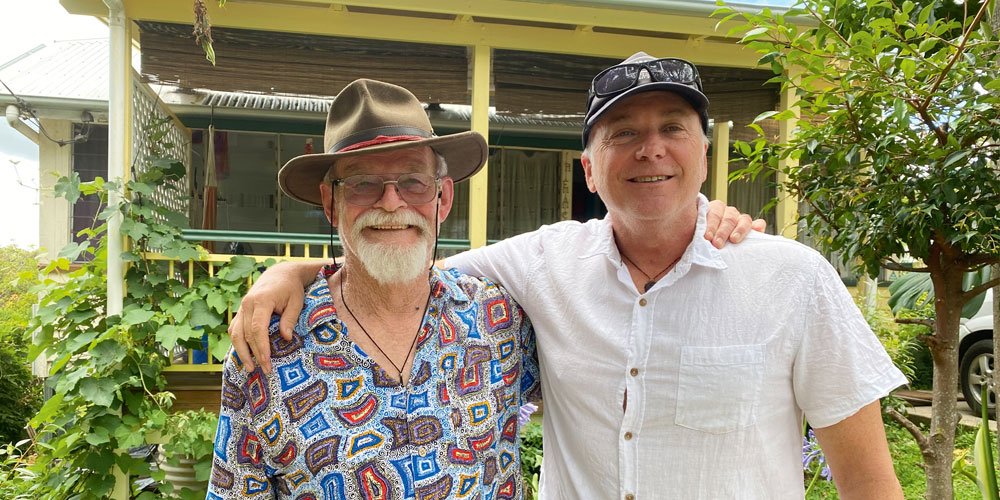 The house in Fig Street is 135 years old and built from local timber. Out the back is a flourishing vegetable garden built by one of its long-term residents, Lance Bergman. Out the front is a porch where men can sit. Inside is a safe space, mostly for men but also for women and children. Five spare bedrooms and a shared living room and kitchen, where emotions are expressed, meals are shared, stories are heard and lives are saved. In the past 25 years, the Maleny Community Men’s House has welcomed thousands of people through its doors, offering them solace and solidarity. The house has seen some stuff and so has its custodian, Michael Wearing.

A Vietnam veteran who arrived in Maleny in 1992, Mr Wearing stands tall and proud at 72 years old. Like the house, he is available day and night for anyone who needs him, male or female, adult or child. Mr Wearing knows pain. In 1969 he married his first wife Christine, a rebellious girl who wore a black wedding dress. Ten days later she died after complications from an ectopic pregnancy and was buried in the same dress. His father committed suicide while he was serving in Vietnam, leaving a note blaming him. He suffered PTSD and grapples with self-acceptance. “My wife died, my father suicided and my mother went insane, all before I was 21,” he says. “It wasn’t until I was 45 that I could feel anything. It took me until 55 until I could cry.”

Mr Wearing went on to marry twice more and father five children. He worked in insurance and provided for the family, but struggled with alcoholism. When he came to Maleny, he was searching for a new life. “When I first got to Maleny I read an opinion piece in The Australian about the horrendous suicide rate of men and boys – suicide among the veterans is about 45 per cent higher. It made me so angry and then I read the book Manhood by Steve Biddulph. The first line is the book is, ‘Most men don’t have a life.’ I started to see what we were doing to ourselves.”

Mr Wearing started one of the first men’s groups in the region in 1992. He has facilitated men’s groups ever since, for the past 25 years operating them from the Fig Street house. He receives no government funding and keeps the house going with his pension. Maleny IGA occasionally donates food. The house is old, but it’s clean, tidy and an alcohol and drug-free zone. Mr Wearing has rented it for years, but a new owner bought it eight years ago and has now handed it over to Mr Wearing to continue the great work being done there.

“We put aside Monday evenings for a cup of tea, a feed and a yarn around the fire,” he says. “Once men get going, they’re good, but getting them going is hard. That’s what we do. That’s what I’m apparently very good at. I say very little. Once they crack, once they get the tears, once it gets real for them and they’re not avoiding their own emotional issues, then it’s their responsibility to do something about it.

“We get suicidal men referred by doctors, psychologists and psychiatrists,” he says. “They’re not mentally ill; that’s the first thing I tell them. You’re not mentally ill mate. You just need to know a lot of man stuff. Once they find out there’s more to them than this little box that goes to work every day, there’s a whole lot more to them, the moment they realise that, they fix themselves.”

Mr Wearing has won awards for his work and been invited to speak in the UK and Canada. He says he could get “grants like crazy” if he became affiliated with large men’s support networks and government agencies, but doesn’t like the rules and regulations that go along with it.

A rule Mr Wearing asks all those who enter the house to follow is written on a chalkboard in the kitchen: ‘Respect, responsibility and kindness for self, to family and Mother Earth.’

“That’s how we live,” he says. “Being real, being clear, being clean. If someone is being an a***hole, we tell them. If we see women with bruises and we know the guy, we slam him up against the wall and say ‘hey, you don’t do that to women, ever’.’”

Mr Wearing welcomes both male and female victims of domestic and family violence and sexual assault into the house and perpetrators are dealt with in no uncertain terms.

“Our whole male reason for being, in my understanding, is to be the protector. That’s why we’re big and strong. We don’t dominate them. We treat women as our queens, properly, with respect and kindness and giving. That’s what we tell our men.

“There’s a lot of hope. There are thousands of men out there doing their own thing to find out what it is to be a man and to help other men too. We know there’s a problem. Women and kids are suffering. We do know that and it’s time for us to stand up and do something. That’s what I’ve been doing for 25 years, doing the best I can to keep them breathing.”

On a mission to give back
The rock ‘n’ roll yogi