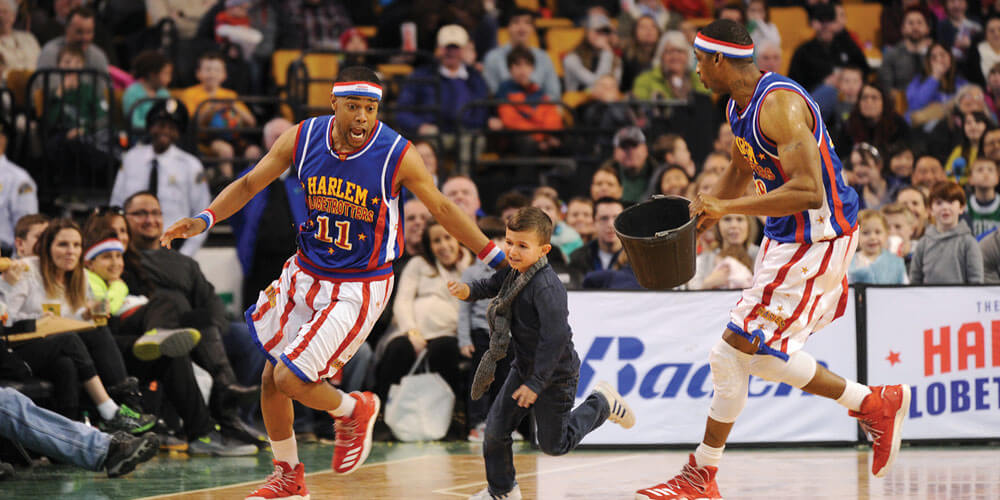 Growing up in the 1970s and ’80s, every kid knew and loved the Harlem Globetrotters. They were the epitome of cool. Who could forget their crazy on-court antics and wicked ball skills, the way they danced around the court to the whistled theme song, Sweet Georgia Brown, and brought big smiles to faces far and wide?

The Harlem Globetrotters weren’t actually founded in New York’s Harlem, but in Chicago, Illinois. They played their first road game in Hinckley, Illinois in January 1927 and went on to win their first World Basketball Championship in 1940.

They stunned the world in 1948 and 1949 when they defeated world champions, the Minneapolis Lakers. The Lakers were members of the Basketball Association of America, which was the forerunner of the National Basketball Association (NBA). As a black team, the Globetrotters were not allowed into the league, or any professional league. Basketball was segregated and many sports fans, coaches and team owners did not want to see teams integrated.

When the Globetrotters beat the Lakers in an exhibition match in 1948 and again a year later, it challenged the prevailing racial stereotypes about the abilities of black athletes. The Globetrotters had immense influence, showing the world African-Americans could excel on a professional level. The victories over the Lakers accelerated the integration of the NBA, as Globetrotter Nathaniel ‘Sweetwater’ Clifton became the first African-American player to sign an NBA contract, joining the New York Knicks in 1950.

When the Globetrotters competed against the Lakers they were on a 102-game winning streak. They were virtually unbeatable and began to clown around to make the games more interesting, kicking off what would later become the trademark entertaining style of play we still see today.

Since those early games, which  changed the course of sporting history,  the Globetrotters have entertained more  than 148 million fans in 123 countries, popularising the slam dunk, fast break, the forward and point guard positions and the figure-eight weave.

Today, the Globetrotters are an exhibition team travelling the world spreading fun, fitness and joy to millions of fans. On  April 12, they’ll play at the University of  the Sunshine Coast stadium on their first visit here. My Weekly Preview spoke to Kris ‘Hi-Lite’ Bruton and Brawley ‘Cheese’ Chisholm about what we can expect.

How long have you been playing with the Harlem Globetrotters?
KB: 18 years.

BC: I have been playing for the Harlem Globetrotters for nine years.

Are you married with a family and if so, what do your kids think of your career?
KB: I’m happily married and my  kids think that I’m the coolest dad on  the planet.

BC: I am not married and I do not  have children, yet. My friends and family continue to follow my basketball career and I know without a shadow of a doubt they are beyond proud of me. Some players do have wives and children and I’m pretty sure they are proud of them too.

What does the team mean to you?
KB: I’m spreading joy, laughter and memories that are enjoyable to families.

BC: This team means a lot to me. The fact that I can be a part of an organisation that has been around for 93 years is monumental. I feel it’s my duty to carry  on the legacy.

Did you know about the team as a child and if so, what were your thoughts?
KB: I remember watching Meadowlark Lemon and Curly Neal as a child and I  always wanted to be a part of the Harlem Globetrotters and be able to make people laugh and cheer like they did.

BC: I knew about the Harlem Globetrotters when I was a young child growing up in New York City. I would watch them all the time on Scooby-Doo, and see them showcase their skills on television programs.

BC: My favourite Harlem Globetrotter of all time is no one other than Fred ‘Curly’ Neal. Curly Neal can brighten up any room and never turns down an autograph. He is just a great person, and a terrific basketball player.

BC: Something that most people don’t know about Harlem Globetrotters is that most of us are multi-talented. A lot of us have our degrees from universities. Some  of my current teammates are graphic designers, real estate agents, basketball instructors, etc.

Are you having as much fun as it looks to the audience when you play?
KB: Of course we are having fun. An individual can’t fake what we do every night. You have to love making people happy.

BC: When the audience watch a Harlem Globetrotters game it looks like we are having a lot of fun, and we actually are! The majority of us have been playing basketball our entire lives. So those two hours between the lines playing a game that we love, and being blessed to get paid for it, it doesn’t get more fun than that.

What does a week in the life of a Harlem Globetrotter look like?
KB: Simple. We play in a different city every day. Jump on the bus and repeat the process until we have delivered smiles to  all the fans that are in our reach.

BC: A week in the life of the Harlem Globetrotters looks like a lot of travelling.  Be ready to live out of your suitcase for some time, be ready to be away from family for some time, but with sacrifice there is always reward. You have the opportunity to change lives, travel the world, and leave a positive impact on society. In the nine years that I have been a Harlem Globetrotter, I have visited over 60 countries, been to every major city in the United States of America and left long-lasting impressions doing school assemblies, etc.

How difficult is it to master the tricks?
KB: Each trick has its own degree of difficulty. Some tricks are easy to master and some take months, even years, to finally get it just right.

BC: Tricks can be hard or they can be easy. It all comes down to how much practice you put in to work on it and how fast you learn. Some tricks are harder for others, and some aren’t. It’s up to you to figure it out.

How would describe the reception you receive when you travel the world?
KB: We are greeted with admiration and friendliness in each country and city that we visit because the fans know we are there to deliver smiles and joy!

BC: The Harlem Globetrotters are like the ultimate home team. No matter where we go – New York City, South Dakota, Los Angeles, New Mexico – people love us. I think it’s because when people think of the Harlem Globetrotters they think of family, fun, love and basketball. We get nothing but positive receptions, but there is nothing like playing overseas – Italy, France, Greece, Australia, Spain. Those fans have less entertainment than the US so their reception of us is amazing, like no other.

You are one of the world’s most recognisable sporting teams in the  world. What message do you hope to give through your performances?
KB: We just want the families that attend our shows to understand that there are good human beings in this world and we’re coming to your city to prove it.

BC: We are the most recognised sporting team in the world. Our message and our mission will stay the same – to infuse the world with love.

Is this your first visit to Australia?
KB: I’ve never been to Australia before but my cousin Cal Bruton and his son live in Australia and they’ve played for the league there and I’ve heard some amazing stories. I can’t wait to get there!

BC: This will be my second time playing in Australia. The first time I came, it was unbelievable, mate! I am so excited to come back and play there again. The people were nice, food was great, the scenery was beautiful, and the fans were amazing.

What can the Sunshine Coast crowd expect from the game?
KB: I don’t want to spoil it for our fans but I will say this: be prepared to be amazed by some of the world’s greatest athletes. Also expect to laugh, laugh, laugh! It’s gonna be awesome!

BC: For those on the Sunshine Coast who have never watched a Globetrotters game, you can expect to see a basketball game like no other – high-flying dunks, flashy passes, trick shots from the stands, long-distance shooting from our four-point line, which is 30 feet from the basket. We create memories that last a lifetime.

Do you have any tips for up-and-coming basketballers in Australia?
KB: Practice every day and believe in yourself, even if no one else does. At the  end of the day, you’re the one who is either improving or waiting for approval. Don’t wait for approval.

BC: Continue to follow your dreams! Anything is possible as long as you work for it, every single day. There might be some pitfalls, bad times, but as long as you don’t give up, success will be waiting on other side. Shoot 500 jump shots a day, run two miles in the morning, do whatever it takes to get you to that next level. Just have fun!

The Harlem Globetrotters play at the University of the Sunshine Coast Stadium on April 12. Visit harlemglobetrotters.com/event/university-sunshine-coast-stadium  for tickets. 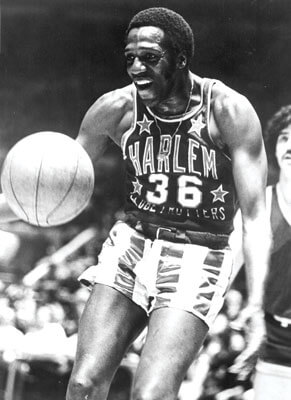 The Harlem Globetrotters did not play a game in Harlem until 1968 – 41 years after the team was founded in Chicago. They were orginally called Savoy Big Five after Chicago’s famous Savoy Ballroom, where they first played. Their coach was 24-year-old Abe Saperstein. During their first game in January 1927, they wore jerseys emblazoned with the words ‘New York’, to give the impression they were from the Big Apple. Their name then changed to Saperstein’s New York Globetrotters, then the Harlem New York Globetrotters, then the Harlem Globetrotters. Harlem was the centre of African-American culture, so they wanted to get the message across they were an all-black team who travelled the world.

Making a scene
The ride of his life